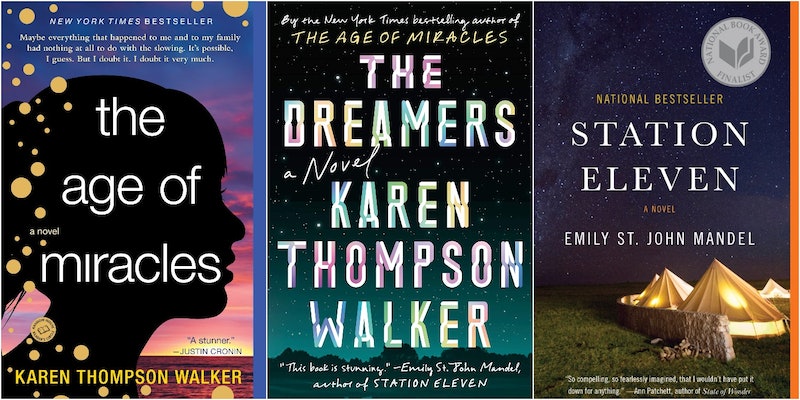 When you think of stories about what happens after the world comes crashing down, what first comes to mind? The Hunger Games or Divergent — YA novels that are filled with heroic young women thrust into danger, and unfathomably muscular 17-year-old boys in possession of sensitive souls and years of weapons training? Or maybe the classics like Brave New World, with its artificial wombs, or even Fahrenheit 451, with its government-mandated book burning? These are all dystopian by definition, and like millions of other readers, I love these stories, too. But when it comes to books about frightening future worlds, the ones that really tend to grab hold of me are actually apocalyptic novels like Karen Thompson Walker's The Age of Miracles, her new release, The Dreamers, out Jan. 15, and Emily St. John Mandel's Station Eleven.

These books are what I like to call "quiet" apocalyptic novels: character-driven tales of normal human endurance; some in dystopian settings, but most taking place in a world that looks much like ours. Here we have complicated relationship dynamics, explorations of legacy and love. These are novels that ask the same question: What does it truly mean to be alive, especially when life as we know it seems to be at an end?

In The Dreamers, Thompson Walker writes of the first sign of the sleeping sickness that will take over an entire town:

"This time, it starts at the college. It starts with a girl leaving a party. She feels sick, she tells her friends, like a fever, she says, like the flu. And tired, too, as tired as she has ever felt in her whole life."

Thompson Walker's first novel The Age of Miracles begins with Julia, 13 years old, watching the news report on television: the Earth's rotation is slowing. Station Eleven travels back and forth between a pre-apocalyptic and post-apocalyptic world, but it begins just the same, with an every day event: a performance of King Lear. There is no government conspiracy here, there are no factions. People get sick. The planet begins to turn its back on humanity. And through it all are the normal disasters of every day life: marriages collapse, people fall in love, friends drift apart.

In both Thomson Walker's The Dreamers and Mandel's Station Eleven readers follow the end of the world through ensemble casts — in both cases, they are survivors of a deadly virus. In Station Eleven, a Hollywood actor dies onstage and soon after, the world begins to dissolve. The novel then charts the strange twists of fate that connect five people: the actor, the man who tried to save him, the actor's first wife, his oldest friend, and a young actress in a traveling theater troupe.

There is much of the usual apocalyptic landscape here: no more cities, no more flights, "no more Internet, no more social media, no more scrolling through litanies of dreams and nervous hopes and photographs of lunches." And yet, what the characters miss — and cling to — most is human connection.

“She was thinking about the way she’d always taken for granted that the world had certain people in it, either central to her days or unseen and infrequently thought of. How without any one of these people the world is a subtly but unmistakably altered place, the dial turned just one or two degrees.”

The cause of the apocalypse in these novels is always frighteningly normal: a simple virus, a subtle slowing of the earth's rotation, a too-long sleep. But maybe the end won't come in a flash, with an alien invasion, or a third world war, or catastrophic climate change à la The Day After Tomorrow. Perhaps there will be no "chosen one." Perhaps it will come on a day like any other, no fire and brimstone to mark it.

The beginning of the end could happen while we're at work, at home playing with our children, in bleary-eyed content after a night out. In the end, it might all slip away from us suddenly, so easily, as if in a dream. But maybe, just maybe, the end can be a beginning, too. A opportunity to reexamine what matters most. A chance to start over, to do things right this time. Could the stakes possibly be higher?

More like this
Aemond Targaryen's Fate On 'House Of The Dragon' Is Full Of Revenge In The Book
By Grace Wehniainen
This Episode 6 Moment Foreshadows Viserys' Fate On 'House Of The Dragon'
By Grace Wehniainen
Ling Ma Is Back — This Time, With Yetis
By Kate Dwyer
Romance Authors Are Mobilizing For Reproductive Rights
By Natalia Perez-Gonzalez
Get Even More From Bustle — Sign Up For The Newsletter