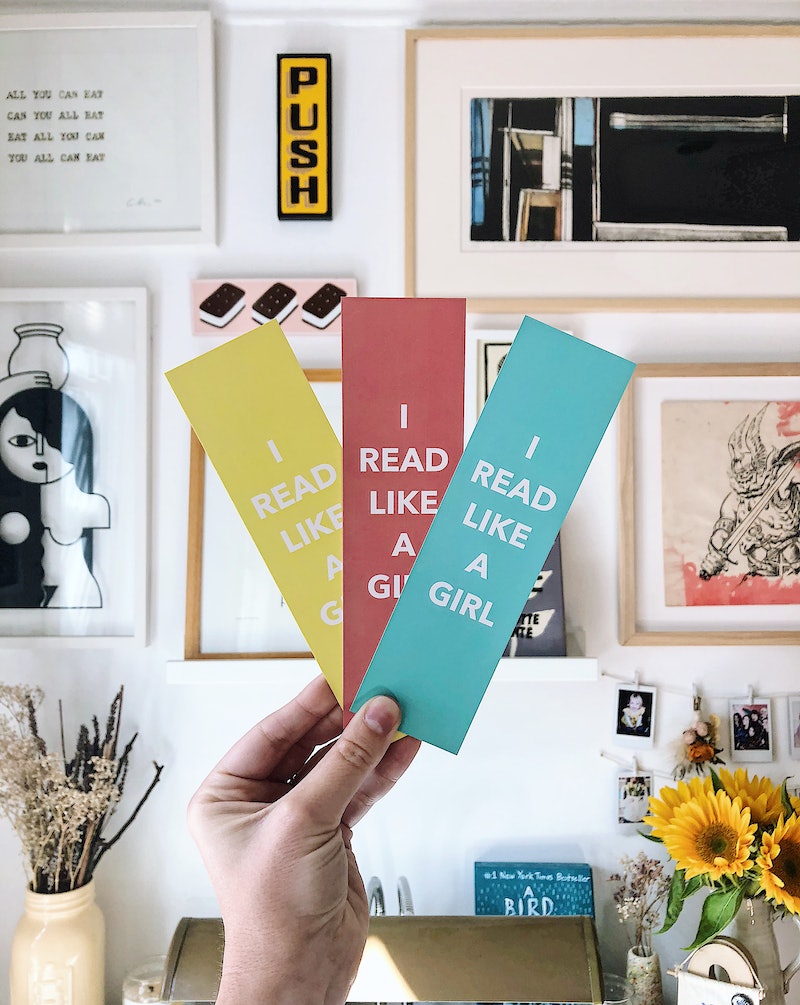 Photo courtesy of She Is Booked

For many in the book world, it wasn't exactly a surprise when the online community of readers and authors emerged as one of the biggest advocacy groups for social and political reform after President Donald Trump's election. From organizing on social media for everything from fundraisers to protests, and adding their voices to numerous anthologies about resistance, leaders in publishing are using their huge platforms to inspire and enact change. Now, Book Baristas blogger Natasha Minoso (who boasts 134,000 followers on Instagram, as of this writing) and YA author Jacqueline Mellow — who writes under the pen name E.J Mellow — are adding their names to the list with their new bookish charity project, She Is Booked.

"Jacqueline and I were FaceTiming after watching some of the Kavanaugh hearing and feeling incredibly disheartened," Minoso tells Bustle. "Jacqueline looked at me and said, 'Is there something we can do? We have these platforms, we need to try and make some sort of difference, especially now.' We had no idea what to do at first but I was all in."

Mellow says, "Nothing really put a fire under our butts like She Is Booked has. When you build a larger social following, we feel there’s a responsibility that comes with that. We wanted to leverage what we’ve each worked hard on for something good, something beyond our own gain."

She Is Booked, which launched on Oct. 19, is an online shop that sells two different bookmarks — one reads "She Is Booked," the other, "I Read Like A Girl" — and 100% of the proceeds will go toward supporting women's charities. Unsurprisingly, considering that the #MeToo movement was their initial inspiration, Minoso and Mellow are starting with donations to RAINN (The Rape, Abuse and Incest National Network), the nation's largest anti-sexual violence organization. But the duo are also hoping to branch out to more charities in the future, with Minoso saying they are, "looking into donating to postpartum depression organizations."

For Minoso and Mellow, it was a no-brainer that they would combine their love of books — and their very visible positions in the book community — with their charitable pursuits. And even with all of the many avenues of bookish merch open to them, bookmarks still felt like the best place jumping off point.

"We wanted to start simple," Minoso says, "with something that every reader could get behind. Bookmarks are also little pause buttons on reading, and that's a great time to make your mark IRL. We also love that the bookmark is a physical reminder that you've done something good. On the back of each bookmark we have an acknowledgment that says, 'If you are holding this bookmark, you have made your mark.'"

As for the two chosen slogans, for Mellow, they fully encapsulate exactly what the project, and those who support it, stands for.

"We want to use our voices to help make a change, where we, as women, are busy making moves towards a more equal and just future for ourselves, for those who didn’t have the chance before us, and for those who will come after," Mellow says. "We also like how the phrase 'Like a Girl' is consistently being flipped into a positive measurement of success, because that’s exactly what it is. We want to help push that messaging."

While Minoso and Mellow don't currently have any plans to expand She Is Booked beyond their current offerings, they're excited about the potential reach for their project. For now, though, reaching out to the members of the book community with the message that that you can help make a change no matter who you are, and no matter how big or small your contribution may seem, is of the utmost importance.

"I think that while reading can seem solitary, it is often anything but," Mellow says. "It’s a way to feel connected to situations, [to] characters, and to feel understood. The reading community is an incredibly passionate space. Despite having different ideologies, religions, and nationalities, despite the fact that many of us will never have the chance to meet in person, we stand together in our shared passion for literature. This creates such a unique empathetic bond between strangers reading the same stories. What an amazing thing! And what an amazing group of people to help champion a cause."