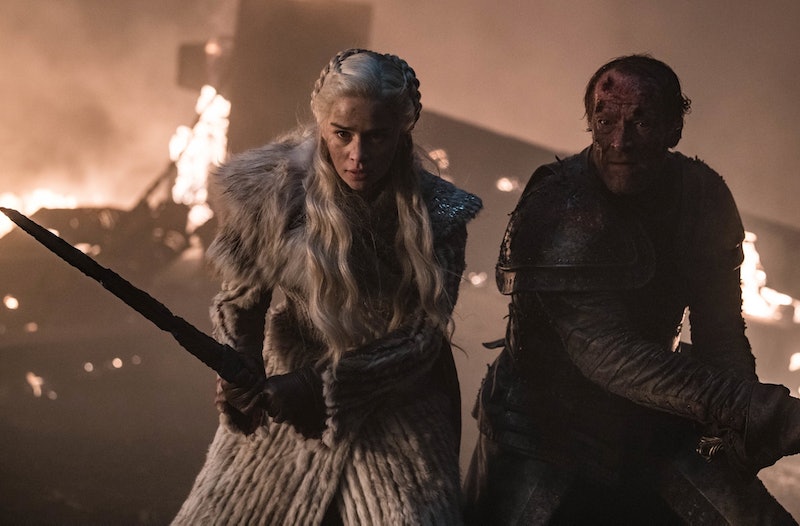 Spoilers for Season 8, Episode 3 of Game of Thrones ahead. Winter is gramming. Well, we made it. The epic Game of Thrones battle we've been waiting for finally happened, and Thrones actors and regular folks alike are letting the feelings flow. After Sunday's episode aired, some Game of Thrones stars posted reactions to the Battle of Winterfell on Instagram, and the content is about as priceless as a Valyrian steel sword. Much like Sunday night's episode, the cast's post-Battle of Winterfell Instagram posts do not disappoint. Then again, maybe you were disappointed by Sunday’s episode, which… whatever. That is your prerogative. We do not have to agree on everything (but it was great).

Anyway, the Battle of Winterfell. It happened. Wow, did it ever happen. A bunch of White Walkers died. A bunch of wights died. An ice dragon died. Things got real creepy in the crypts (wow, who saw that one coming?). Several beloved characters were killed while battling the army of the dead. Arya Stark popped up out of the snow like a possessed jack-in-the-box and stabbed the Night King with a Valyrian steel dagger, reducing him to a pile of ice cubes.

It was a devastating, exhilarating, satisfying, and emotionally draining 82 minutes. If there was ever an episode of Game of Thrones that called for cranking the Soulja Boy and Superman-ing some some snow, it would be this one.

After the episode, Allen paid tribute to his character, Theon Greyjoy, with a photo of his armor. No, you are the one who is crying. I just have some Night King ice in my eye.

I did not know I needed a Bran Stark and Night King spinoff before I saw this photo of Furdík holding an umbrella over Hempstead Wright, but oops, now it is the only thing I can think about. Think of all the goofy supernatural capers these two could get into! Raising the dead, warging, talking trash without actually saying anything— the possibilities are endless. It could be called something like "Three Ice Raven." Or "Ice, Ice, Branny." Or "The Night King and Eye."

Arya Stark taking down the Night King is obviously the best thing to come out of the Battle of Winterfell, but the first runner-up? I've gotta say, this picture of the Night King with an enormous checkered umbrella next to a smiling Bran Stark is probably my pick for second place. Long live the Night King and Eye.