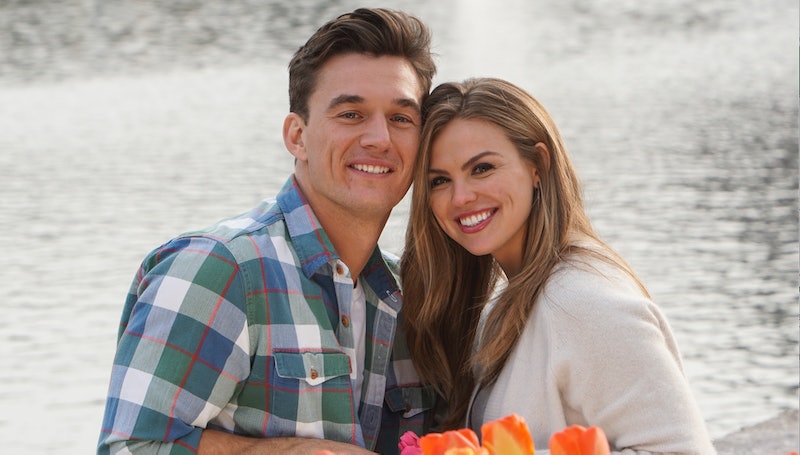 Of all the Bachelorette contestants this season, Tyler C. may be the man who's stood out the most (at least, the one who's stood out the most for a positive reason). But does that mean Tyler C. could be the next Bachelor? Or are viewers just hoping Hannah gives him her final rose? He's impressed viewers again and again with his emotional intelligence, sense of humor, and chiseled jawline. However, given ABC's last few picks for Bachelor, it's hard to say if that will be enough.

Aside from his intro video dance, Tyler first really started capturing people's attention during his one-on-one with Hannah. Upset by all the drama Luke P. has been creating (what else is new?), Hannah wasn't feeling like her usual, bubbly self. But Tyler was quick to soothe her anxieties, proving he'd be there for her through good days and bad alike. He also showed off his speech-giving skills, telling Hannah:

And since then, their relationship has only grown. Last week, he eloquently expressed how he feels about Hannah once again, praising her for how she'd handled the difficult journey so far. "You had this look, where you were just all business, and I thought, 'That's what I want,'" he said. "Where did this fighter come from? Because I adore it."

Maybe Tyler was inspired by Hannah's fighting energy, because he took it upon himself to shut down Luke P. when he told the contestants he objected to Hannah and Garrett's date. "Do you not think it's a double standard, the fact that you're able to parade around in a Speedo in front of everybody and show your big bravado self," he asked, "but she can't go jump off this [...] — do bungee-jumping?"

Naturally, Twitter swooned over Tyler calling out Luke P.'s double standards and toxic masculinity — not to mention his willingness to stand up for Hannah. We all know those men who call themselves "woke," but then act totally different around their bros. Tyler has proven time and time again that he's the real deal, whether he's around Hannah or not.

For the remaining cynics who want to believe Tyler is only this good on camera: nope! Mr. Cameron is equally vocal about Hannah's right to do whatever she wants offscreen, too. When former Bachelorette contestant James Taylor tried to suggest that Luke P. had a point for shaming Hannah, Tyler swiftly let him know he wouldn't stand for it. "Let our Queen live and let’s embrace her on this journey," Tyler wrote in his reply. "Very few have a clue what it's like to be in the leads shoes. Our Queen is imperfectly perfect like us all."

Ultimately, Tyler's sincerity, loyalty, and ability to dismantle patriarchal nonsense make him a Timothee Chalamet-level heartthrob — but will that be enough for ABC to make him the Bachelor? After Jason Tartick, Blake Horstmann, and Peter Krause were all passed over for Colton, Bachelor viewers have their suspicions that "fans love him" isn't as big of a factor as it used to be. Then again, people were shocked that Hannah was the Bachelorette pick, and her season's been pretty great.

Whether or not Tyler gets ABC's (or Hannah's) final rose, we just want to see more of him. Maybe a lecture series where Tyler C. teaches other men how to not be terrible on The Bachelorette? Just a thought.