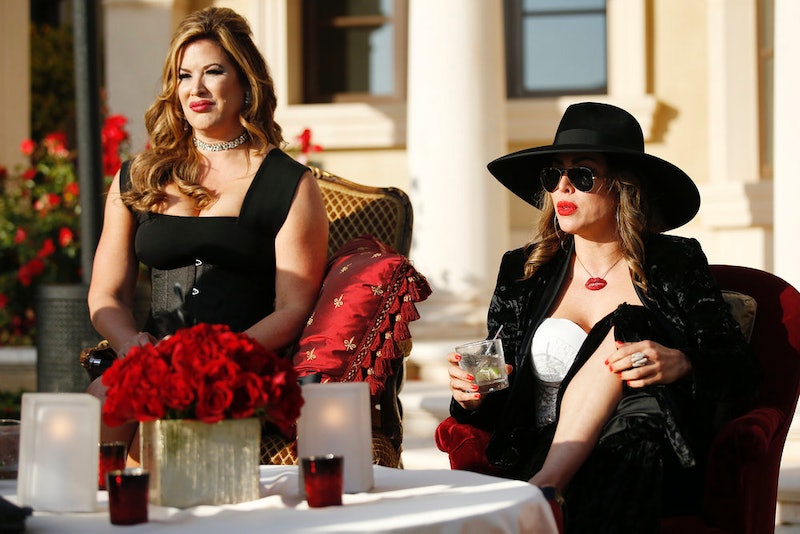 A season of Real Housewives can be tough on a couple, especially if you’re a new cast member and you have to deal with not only the stress of fitting into a new group but also the effect it’s bound to have on your family at home. But Emily and Shane Simpson are making it work, and Emily and Shane Simpson’s relationship on RHOC seems to be outlasting that Real Housewives Of Orange County curse.

Emily has told the story about how she and Shane met — they worked together, became very good friends, and then one day, she and Shane were talking on a chat program at work, and he asked her to marry him, and she said yes. Well, love hasn't always been that easy — Shane was married before Emily, and he has two daughters from that marriage.

As she's talked about on the show, Emily had five miscarriages and also lost two twins at four months when she went into early labor. Shortly after, Emily’s sister Sara stepped in and acted as a surrogate for Emily and Shane’s babies — a daughter and two twin boys. So it's been a long and windy road to building a family.

What viewers are seeing play out this season on Real Housewives Of Orange County is the biggest disagreement in Emily and Shane’s relationship — whether or not they should have another baby after all of that history.

Sara has said that she’s not going to be a surrogate another time, but Emily and Shane still have embryos ready for transplant, and Emily wants more kids. Shane does not. On a preview for the Nov. 5 episode of the show, Emily and Shane have opted to go to therapy to discuss their different opinions on having more kids.

Emily doesn’t feel like Shane has a huge sense of loss when it comes to their babies; Shane doesn’t think that’s fair — he mourned their babies just the same. In an interview with Bravo in July 2018, Emily expressed that while she and Shane disagree over how many kids should be in their brood, it’s not a screaming fight.

“While it’s a discussion we often have, we don't necessarily fight or argue about it,” she said. “It's true that another child is something that I really want, but Shane’s reasons for not wanting more children are valid and reasonable, so I respect his position.” Shane simply thinks all he can handle is the five children he has, Emily said, but it doesn’t mean she “won’t stop trying to change his mind.”

Where will it end? Viewers will have to wait to find out, but if Instagram is any indication, Emily and Shane are still together. Shane’s not in every photo on Emily’s ‘gram (and Shane’s is private, so we can’t see in it), but he does have a presence, along with their five children, so they are still one big happy family. Emily and Shane may never agree on this topic, but the fact that they’re in therapy shows that they want to reach a solution and take care of their relationship with each other. Communication is key to a good marriage, and Emily and Shane show by working on theirs on Real Housewives Of Orange County that they are dedicated to staying together.