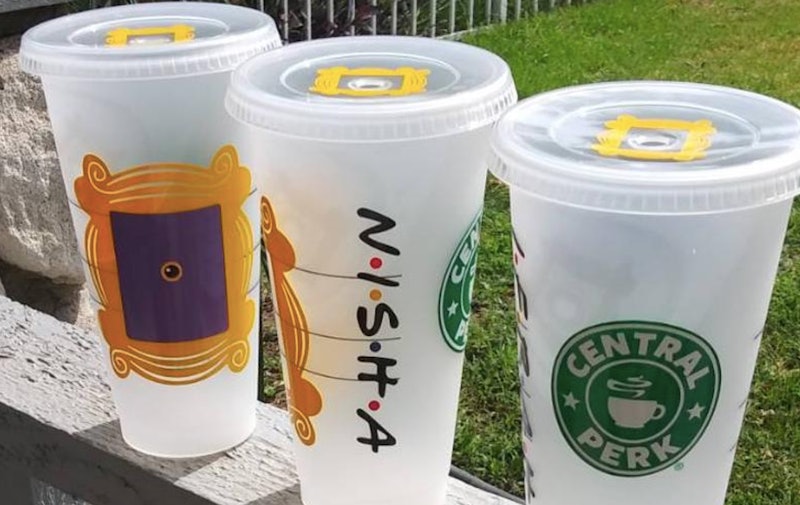 So no one told you that it was gonna be this way — that you'd still be watching reruns of Friends, over and over, for years and years, wondering why you will never be able to afford their apartment and questioning every choice you've ever made while you're lulled in with Joey's dulcet tones. Seriously, our love of Friends is strong for a show that ended years and years ago. And now, you can show that love with a Friends Central Perk coffee tumbler of your very own — one that channels major Starbucks vibes.

Etsy user Well5Krafts has very cannily picked up on two of millennials' greatest loves — TV shows from the '90s and coffee tumblers — and combined them into something even bigger and greater than the sum of its parts. And the best part? It's totally customizable. You can get the Central Perk logo, the classic frame on the door, or even a little "How You Doin'?" Joey decal. And, even better, you can get your name right on the cup to make sure that nobody can steal it — and your name will be in the Friends font and logo you remember from the show. There is so much Friends happening on one little cup, so fans will not be disappointed.

Prices start at $14, depending on the size and what you want to do with it. Could it *BE* a more exciting tumbler? Probably not. These are perfect for your cold brew or iced latte, but now that I think about it... did we ever see them drinking iced coffee? Did iced coffee exist in the '90s? How old am I?

Seriously, considering Friends ended 15 actual years ago, we are still very devoted to its cause. And that's partially due to being able to get the show on Netflix — though not for long. Friends is leaving Netflix in 2020, which is one of the saddest things I've ever heard, and will be available instead on WarnerMedia's new streaming platform, HBO Max. I request a moment of silence.

But loving the show is about a lot more than just watching the show — you can now deck your entire apartment out with Friends-style furniture at Ikea. Though, as previously mentioned, you will almost certainly not be able to afford a vast two-bedroom apartment in Manhattan anytime soon. I don't care if it was meant to be their grandmother's or whatever, it is simply not fair. But if the furniture isn't enough, then there are other ways to show your devotion. There was a Friends-themed cafe that opened in Primark in Manchester, U.K. to celebrate the 25th anniversary of the show — but if you missed that, you can catch a Friends musical at the Edinburgh Fringe this August. Are all of the songs written by Phoebe? Is it just someone singing "Smelly Cat" for three hours straight? We can only hope.

For some reason, millennials have a ferocious, insatiable appetite for all things '90s and early 2000s — and that includes Friends. While streaming the show on Netflix has kept our love of it alive, it's important to remember where it really lives — in our hearts. No matter where it's streaming (or not streaming), you always carry Monica, Joey, Rachel, Chandler, Phoebe and, yes, even Ross with you. And now you can do it with a tumbler.

More like this
Andie From 'How To Lose A Guy In 10 Days' Is A Total Gemini
By Nina Kahn
Courteney Cox & Laura Dern Proved Their BFF Status With Matching Tattoos
By El Hunt
These 4 Zodiac Signs Make The Best Bridesmaids
By Nina Kahn
These 3 Zodiac Signs Could Write A Bestselling Novel
By Brittany Beringer
Get Even More From Bustle — Sign Up For The Newsletter
From hair trends to relationship advice, our daily newsletter has everything you need to sound like a person who’s on TikTok, even if you aren’t.