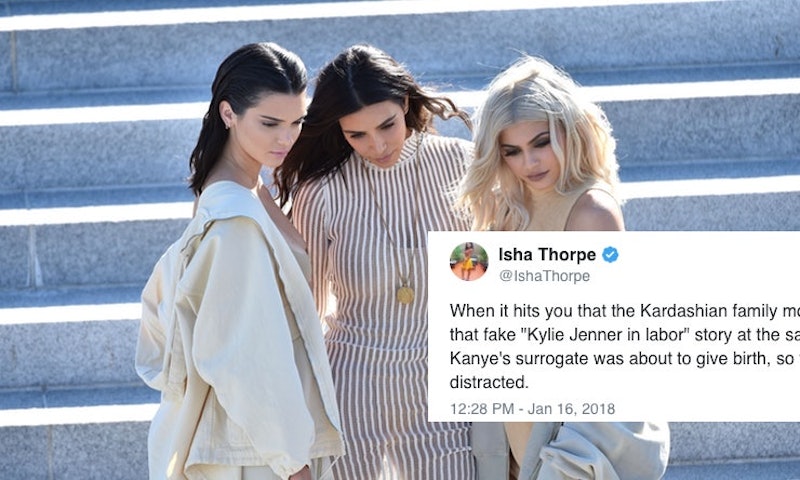 If you've been anywhere near the internet today, you've most likely heard the news that Kanye West and Kim Kardashian's third child was just born, via surrogate. And while some may have mixed feelings about the Kardashian clan, it's no denying that most people are losing their goddamn minds. But even more interesting is the constant, and popular, theory that Kylie Jenner is Kim's surrogate, as tweets and memes posted on Tuesday showcase perfectly.

Several days ago, there were rumors that Jenner had checked into a hospital and may have been in labor. While that was never confirmed, many fans are rolling with it and continuing to make noise on Twitter, letting everyone know how logical the theory that Jenner not only gave birth, but gave birth to her sister's baby as a surrogate, may be.

This is all speculation, of course, considering Jenner has never announced her pregnancy or confirmed the sources saying she is. But there have been many hints about her rumored pregnancy. She hasn’t been seen out in public in months, she does aspire to have kids of her own, she hasn't posted full-body photos in a while, and just on Sunday’s episode of Keeping Up With The Kardashians, she was said to have problems with someone who worked for her sneaking pics on the side. She of course could have just wanted privacy, or if could have been because of her growing baby bump. Who knows, but Twitter is just doing what Twitter does best and churning out the best memes and tweets about the rumors.

1. Breaking Down The Theory With Praise

Again, Kylie has never confirmed her pregnancy, but with all clues pointing to her having a bun in the oven, the timing of Kim's baby being born over this holiday weekend brings a lot of things to light. If the rumors are true (along with this conspiracy), Kylie is doing her sister a huge favor, and that's definitely admirable.

2. There's No Such Thing As Coincidence In The Land of The Kardashian/Jenners

Timing is everything. Why was there a report recently saying Kylie was at the hospital? Of course, the answer could just be chalked-up to rumors being just that: rumors. But again, what are the odds that these two things happen in one long weekend? Coincidence? In the Kardashian/Jenner news cycle? Odds are unlikely.

3. Kylie Is On Even Closer Watch Now

Despite what you believe, there is definitely going to be a huge uproar if Kylie comes back in the public eye next week, sans baby bump. But quite honestly, there'll be an uproar either way (it is the Kardashians and Jenners we're talking about here).

The Kris FBI gif will never not be funny, so no wonder it's been expertly used for this theory. Not much is known, so for Twitter sleuths, it's an open case that is itching to be closed.

There are many people on the Twitter timeline that are jumping for this theory, and some just can't deal with it. If it is true, this is insanely well-done and definitely a twist-to-end-all-twists. And if it isn't? Conspiracy theorists everywhere will have lost this one.

Kris is the best momager that ever existed. And the Kardashian family has been known to be queens of driving conversation and rumors. So, would anyone be surprised if, on top of this big twist, it was the family themselves that made it all fall into place with a rumor they started? No, no one would be surprised about that one.

7. The Kardashian Tea Is Pipin' Hot

It makes sense and the believers will be drinking their tea all day long.

8. *Pretends To Be Shocked*

After putting everything together, there really is no denying that it's a pretty solid theory. And so when/if this "Kylie is Kim's Surrogate" theory is confirmed, many will be unsurprised.

9. We All Are Just A Tad Bit Interested (Don't Lie)

Whatever level of Kardashian fan you may be, there is definitely an interest to this story, even from casual (or reluctant) followers. It's juicy, it's exciting, and highly entertaining to talk about.

10. We Still Don't Know Anything, Really

Again, we ask and ask and ask these questions about "is Kylie pregnant or isn't she" and we still don't have answers. And we may not have any for a while. There's really no timeframe for this theory stuff.

11. Some Have Already Decided That It's True

Despite lack of confirmation and just hints and clues, some have decided the fate of Kylie's baby and dubbed the situation as they think it is: Kylie is Kim's surrogate.

12. We Can Just Imagine the Coverup Story If It Is True

Since there are no actual pictures of a baby bump, Kylie could just play that the last few months have just been a much needed social detox and that's why she's stayed away for so long. She may come back, completely not pregnant. And whether that's the truth or she was Kimye's surrogate all along may haunt us for eternity.

No one knows these answers. And what may keep you up at night is, "Will we ever know the answers?" Again, the outcome of that question is unknown.

After nothing was confirmed about Kylie's pregnancy this weekend during the 2-night Keeping Up With The Kardashians event, like many had hoped, some are losing faith. But what we can confirm is Kris' superb marketing skills.

15. Put Your Money Where Your Tweets Are

Many are convinced and can't be told otherwise. But can you blame them? This is an interesting theory and one that will not go away until proven one way or the other.

Let's just hope something happens, for our sanity.