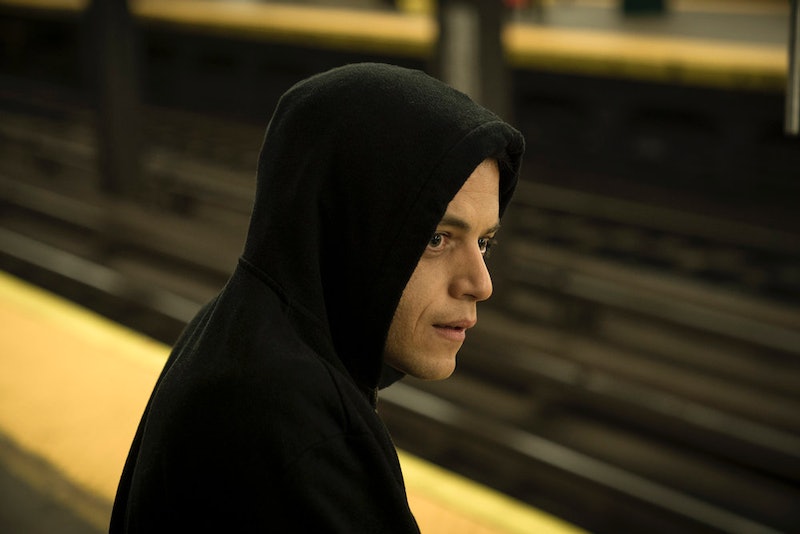 In Season 1, Mr. Robot revealed that its titular hacker (played by Christian Slater) was not, in fact, a venerated cyber prophet, but a construct within the mind of main character Elliot Alderson. Now, in its final season, the show has teed up the bombshell that Mr. Robot isn't Elliot's only other personality: in Oct. 13's "Payment Required," Elliot's mother implied, via a flashback, that her son has a third identity, so far unknown to the audience. This has understandably led to a number of fan theories about who "the other one" Elliot's mother referred to could be — though series creator Sam Esmail told The Hollywood Reporter this is one twist no one has predicted.

Still, that doesn't mean it's impossible to figure out. Esmail also said "the other one" has been in place since the very beginning of the series, which means there should be plenty of evidence to be gleaned from previous episodes — Esmail even confirmed so. "You guys could technically figure it out because it's been in the show the whole time," he told THR. And boy, are fans trying to. Here are the best theories based on the (very little) we know so far.

More like this
'Stranger Things' Season 4 Volume 2 Trailer Teases New Episodes Coming July 1
By Grace Wehniainen and Gabrielle Bondi
The 'Ms. Marvel' Review Bombing Controversy, Explained
By Radhika Menon
The 24 Best K-Dramas To Stream On Netflix Right Now
By Alyssa Lapid
We Finally Know When 'Grey’s Anatomy' Is Coming Back
By Brad Witter
Get Even More From Bustle — Sign Up For The Newsletter