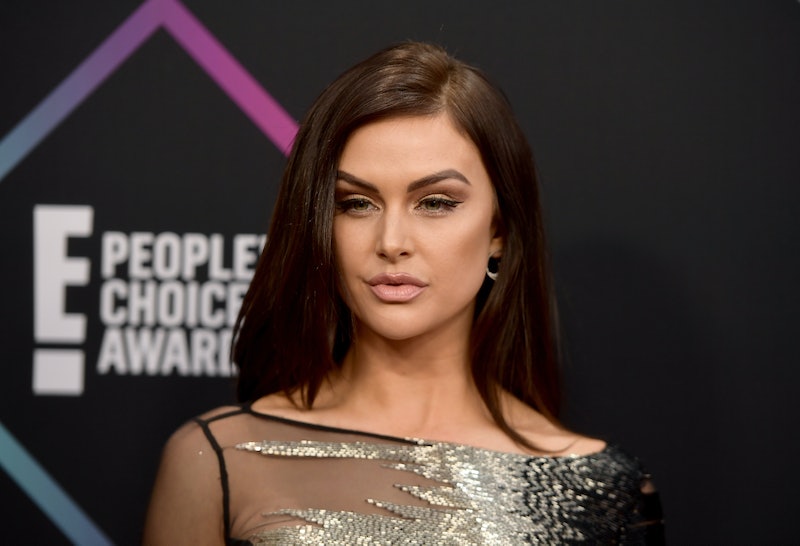 Lala has been giving silver screens Lala, and she won't stop giving them Lala anytime soon. The Vanderpump Rules star has landed another feature film role, and the photos from Lala Kent’s new movie set will almost SUR-tainly make you do a double take. Lala has gone full 1940s, and per usual, she looks amazing. No matter the decade, Lala brings it.

As Kent and her fiancé Randall Emmett revealed on social media this week, the Bravolebrity has a part in Axis Sally, an upcoming drama based on a true story about a woman who disseminated Nazi propaganda to English-speaking audiences. Michael Polish is the director, Emmett is one of the movie's producers, and the cast includes Meadow Williams, Swen Temmel, and someone named Al Pacino.

"@lalakent proud of you and this role that your crushing from the 1940s," Emmett wrote on Instagram. "they all going to be blown away!!" I know one thing for sure, I am blown away by Lala's transformation. The hairdo, the makeup, the outfit— if Lala Axis Sally look was a color on the color wheel, her everyday style would be on the exact opposite side of the circle. And again, she looks amazing. Because of course she does.

How did Lala become "unrecognizable"? Hair and makeup artists, baby.

Lala snapping a quick selfie on a real-deal movie set in between takes could not feel more right.

Here is another Lala selfie for you, because you really can't have too many Lala selfies.

Oh, the director posted a photo of Lala, too. And like Emmett, Polish said Lala is "crushing it."

And do you know who else was on set this week? Polish's wife Kate Bosworth. The Blue Crush actor shared some behind-the-scenes looks at Axis Sally, including this photo of Lala giving them Lala.

If you happen to be the sort of Pump Rules fan who keeps a close eye on the Pumpers’ present-day exploits via social media, first of all, welcome to the club. (Please help yourself to some beer cheese and Tito’s vodka.) Also, that probably means you know Axis Sally is not Lala’s first period drama. But uh, just in case you missed it, here is the scoop: Last year, the SUR hostess teased her role in Vault, an to-be-released flick that is set in the 1970s.

You also probably know that Lala’s the star of 2018’s The Row, which is not a period drama, but a horror movie about a serial killer who targets a group of coeds. Oh, and you probably also know that in October of last year, Page Six reported that a sequel to the sorority slasher was given the green light. Lala is reportedly slated to be in the followup to The Row, too.

Lala's been to Cannes, she is acting in a movie with Al Pacino, she is the star of a horror movie series, she knows Kate Bosworth, and she is in another movie that just so happens to star Bruce Willis? The Pumper's star is on the a-SUR-nt.

More like this
This 'Emily In Paris' X 'The Hills' Crossover Is Très Chic
By Marenah Dobin
Blake Abbie Was In A 'Boys Over Flowers' Reboot Before 'Bling Empire: New York'
By Alyssa Lapid
10 Photos Of The Wildest Limo Arrivals From 'The Bachelor' Premiere
By Brad Witter
Khloé Kardashian Writes Touching Instagram Tribute To Tristan Thompson’s Mother
By Alyssa Lapid
Get Even More From Bustle — Sign Up For The Newsletter