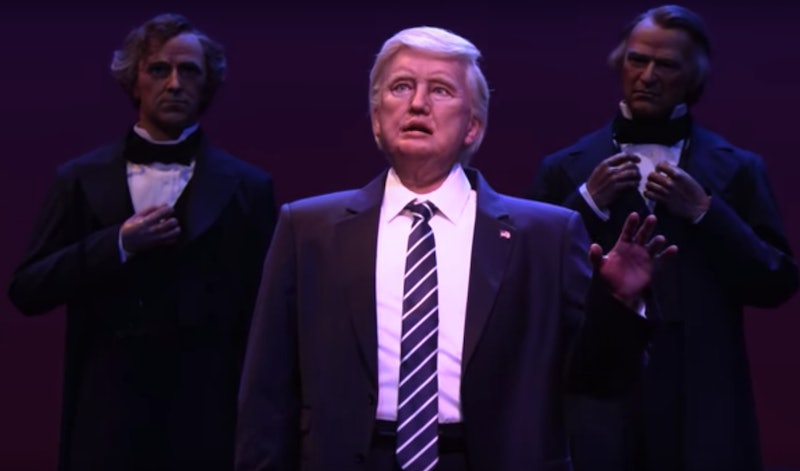 When Walt Disney World added Donald Trump to its Hall of Presidents, a theater featuring animatronic versions of past commanders in chief, people were less than impressed. Some said it looked like they put a wig on an animatronic version of Jon Voight, or as if the theme park had started to make a Hillary Clinton robot, but had to change it to Trump at the last minute. Now, someone has replaced Trump's actual face with his animatronic one in photos, and it's both hilarious and slightly disturbing.

Twitter user @bornmiserable photoshopped robot Trump into real-life images of POTUS. "Honestly, it's an improvement," they wrote, sharing the newly edited photos. In one image, animatronic Trump is sitting in on a family portrait. In another, Trump is meeting the Pope. And in the third, he's sitting slack-jawed next to First Lady Melania.

After his initial post, @bornmiserable started to take requests from his followers. People offered suggestions as to where animatronic Trump should show up next. @Bornmiserable began editing newscasts featuring Trump, and photos of him meeting world leaders, golfing, and posing in the Oval Office. Robot Trump even hovers behind Hillary Clinton during a presidential debate and celebrates New Years Eve with Don Jr.

Take a look at some of @bornmiserable's work below.

In @bornmiserable's first post, they placed the robot version of Trump in a family photo, an image of him and Melania, and a picture of him meeting the Pope.

Blame On "Both Sides"

Animatronic Trump was superimposed into a photo of Trump's press conference following the neo-Nazi rally in Charlottesville, Virginia in August 2017, during which he said "both sides" were to blame for the conflict that resulted in a white supremacist killing protestor Heather Heyer.

"One more, just because I can," @bornmiserable wrote, posting a photo of Disney's Trump, flanked by Vice President Mike Pence and House Speaker Paul Ryan, addressing a joint session of Congress in February 2017.

Real Trump was replaced by his robot doppelgänger in the now infamous image of the president touching a glowing orb in Saudi Arabia. It's really a glowing globe at the Global Center for Combating Extremist Ideology.

And He, Of Course, Golfs

The Hall of Presidents' version of Trump was photoshopped into an image of the real-life Trump golfing, which the actual president has been doing for the past seven days straight.

And He Drives A Big Truck

Animatronic Trump sits behind the wheel of an 18-wheeler at an event with truckers and executives at the White House. The image of the president hunched over the steering wheel, eager to honk the horn, was shared after the event in March and quickly became a meme.

The robot version of Trump was implanted into an image of then-president elect Trump mocking disabled reporter Serge Kovaleski during a campaign rally.

He Even Appeared On The Tonight Show

The theme-park attraction replaced Trump in a photo of the president on The Tonight Show, during which host Jimmy Fallon tousled his hair.

Making a strange photo even stranger, animatronic Trump posed in the Oval Office with Sarah Palin and Kid Rock.

He Tries To Intimidate Hillary Clinton

It looks like Hillary Clinton isn't intimidated by the real Trump or the robot version of the president. In one image, @bornmiserable put animatronic Trump behind Clinton during one of the presidential debates, the one during which Clinton said Trump was "literally breathing down" her neck.

Not Your Real Dad, Don Jr.

To see how truly unsettling the animatronic Trump is, you can watch part of his monologue at the Hall of Presidents on YouTube. Some people have already gone to the amusement park to protest on the ride. "I protested @realDonaldTrump at the #hallofpresidents cuz I'll never get this close in real life probs. #lockhimup," comedian Jay Malsky told Splinter.

After seeing the animatronic version of Trump, Pulitzer-winning political animator Ann Telnaes described to the Washington Post the robot's major flaws. “Besides the obvious complexion inconsistency, his hairline — or how it’s coiffed — isn’t low enough," she said. “His eyes are too large, and they’ve obviously taken off quite a few pounds."

This isn't @bornmiserable's first time photoshopping Trump, but it's his first time utilizing his creepy robot twin. "I've done several Trump Photoshops and when I saw that animatronic figure, I just thought it would make more sense to put it in place of him," @BornMiserable told Mashable, "just about as much of a human being as he is."

More like this
10 Times Diana & Meghan Spoke Similarly On The Royal Family
By Sophie McEvoy
How The City Healed Five Years On From The Manchester Arena Attack
By Ella Glover
Michigan’s Governor Is “Going To Fight Like Hell” To Protect Abortion Access
By Andrea Zelinski
If You Like Cool Sh*t, You'll Love These Dope Products Under $35 On Amazon
By Veronika Kero
Get Even More From Bustle — Sign Up For The Newsletter