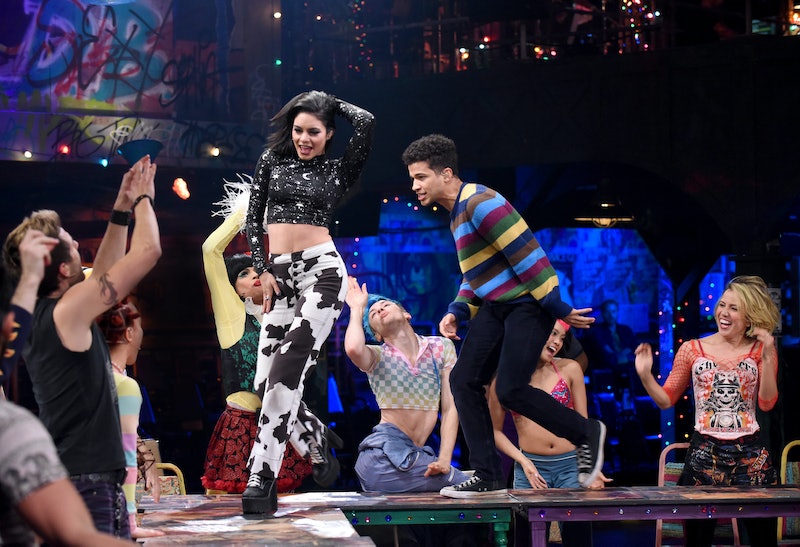 If you watched Fox's Rent Live on Sunday, Jan. 27, and were a little confused by the "Previously recorded" message written at the bottom of your screen, you wouldn't be alone. Of course, the whole premise of this broadcast was to watch a live, TV performance of a beloved Broadway musical, and yet what aired was the dress rehearsal taped the previous night. However, that doesn't mean they didn't put on a live show, and these Rent Live clips show what the actual live audience saw on Jan. 27.

On Saturday night, the actor who played Roger, Brennin Hunt, broke his foot during dress rehearsal, forcing Fox to air the dress rehearsal version, which was taped as if it was a live show. However, because the show was taped in front of a live studio audience, and Fox still had ticket holders ready to go to the live performance on Sunday, well, the show still had to go on. Instead of doing a full out performance, complete with set changes and elaborate dance routines, the live audience got to watch a "concert" style version of Rent Live. And, lucky for us, they put some of it online.

If you watch the two performances below, you'll see that what the TV viewers watched is noticeably different than what went on live in front of the audience there. This is what it looked like to those watching from home:

And this is the concert-style performance given live:

There weren't any costume changes during the in-person production, and the set was stripped down so that Hunt's wheelchair could get around. Of course, even though the viewers at home were watching a pre-recorded performance, there was still no lip-syncing, and everything viewers saw was "live" in the sense that it wasn't one of many takes or manipulated in any way. It was just a recording of them performing live the day before.

Rent Live isn't the first live TV musical, it's just the most recent to broadcast. Since The Sound of Music starring Carrie Underwood in 2013, there's been a handful from Grease to Jesus Christ Superstar, and more. All have been live up until this point, but Rent Live director Alex Rudzinski said that none of them ever had understudies. The only backup they all ever had was the dress rehearsal footage.

"We actually don't have stand-ins," Rudzinski said in an interview with The Hollywood Reporter. "What we do have is a backup recording from the night [before]. The night before we do a full dress rehearsal on camera to tape, so should the metaphorical meteor hit the studio, we can switch to that backup recording, and it's with an audience, and so there is a degree of backup there."

And Rudzinski would know, as he also directed Grease: Live. He actually noted that this tactic of airing the dress rehearsal had been used for Grease Live as well, at least kind of. "Actually, I think on Grease we lost sound for eight seconds and we switched," he said. "I think we had to switch to the backup for eight seconds, and no one noticed."

Of course, despite all the drama, there was one scene that was broadcast completely live, though, and honestly, it might be the most important. The finale of "Seasons of Love" was performed live, with the original cast of Rent returning to the stage, and, yes, with Hunt's foot propped up and in a cast.

While the not-so-live version was a bummer for some, it also was still a good performance, even with dress rehearsal footage. And, thanks to the concert Rent Live videos available online, fans can still get the "live" experience, just not in real time.