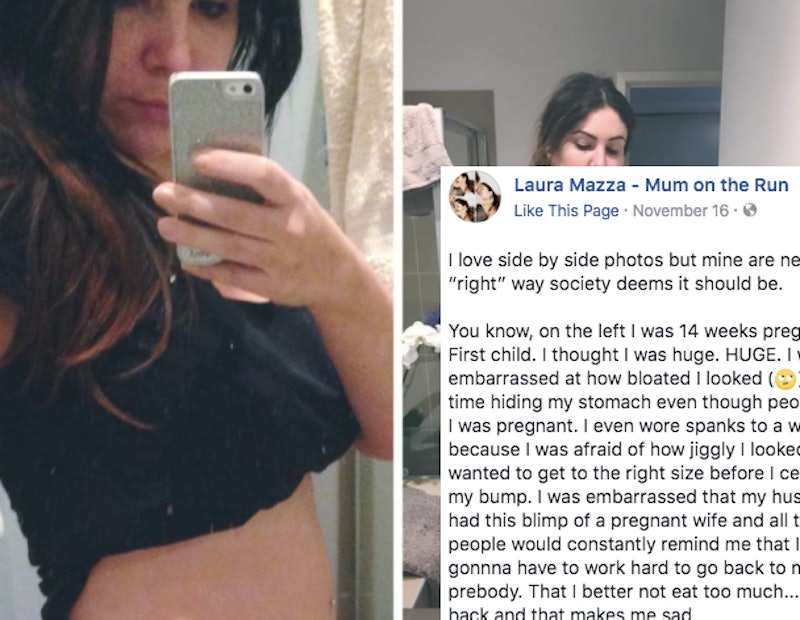 Our culture has all sorts of absurd expectations for anyone who is, has been, or might possibly become pregnant at any point in the future— but that doesn’t mean that we have to accept them. Indeed, Laura Mazza recently posted side-by-side photos of two of her pregnancies to the Facebook page of blog The Mum On The Run in an effort to dismantle those expectations — and she does so spectacularly. “I love side by side photos, but mine are never the ‘right’ way society deems it should be,” Mazza begins — but then, she goes on to break down exactly why not looking “right” doesn’t matter. It’s an important message for everyone to hear, whether they’re pregnant or not.

In the photo on the left, Mazza was 14 weeks pregnant with her first child. “I thought I was huge,” she writes. “HUGE. I was embarrassed at how bloated I looked. I spent time hiding my stomach even though people knew I was pregnant. I even wore spanks [sic] to a wedding because I was afraid of how jiggly I looked.” She says she felt she needed to “get to the right size” before celebrating her bump. Adding fuel to the proverbial fire, too, was the constant comments she got from other people about her body and her pregnancy. “All these people would constantly remind me that I’m gonna have to work hard to go back to my pre-body,” she writes. “That I better not eat too much.”

Meanwhile, in the photo on the right, Mazza was about nine weeks along with her third child — and, she says, about twice the size she was in the photo of her first pregnancy. “There’s no muscle in there,” she writes. “I didn’t lose the baby weight after the first kid, nor the second, and after this kid I won’t rush to lose the weight after this one either.” At this point, Mazza says, “[It] doesn’t look like a bump should at nine weeks, but I don’t care. I won’t hide my little pouch. It’s growing a baby and I should be proud of it.”

This idea of a bump needing to be “the right size” — or, conversely, of “not looking like it should” — is particularly arresting to me. The way our culture views it, it’s not enough that our bodies are capable of creating and nurturing new life; we need to “look right” while doing it in order for what happens to our bodies during pregnancy to be considered acceptable. Consider the fact that one study found pregnant women who read magazines depicting “glamorized media portrayals of pregnant/post-partum women” reported experiencing lower body image after reading those magazines for just five minutes. In real life, we’re surrounded by these glamorized portrayals nearly constantly— not just for five minutes at a time — which ultimately has the effect of setting extremely unrealistic standards for what pregnancy “should” be like. And we then perpetuate those standards, both in how we treat ourselves and in how we treat other people.

Research has found that body image dissatisfaction, although generally stable during pregnancy itself, increases during the postpartum period; this increase has been theorized as being the result of “physical and emotional challenges faced by women in returning to their pre-pregnancy appearance.” But I have to wonder: Would people who have been pregnant be facing these “challenges” at all if it weren’t for the enormous amounts of pressure our culture puts on them to “get their pre-baby bodies back?”

Mazza’s message, however, is that it is enough that our bodies can create and nurture new life without needing to “look right” while doing it — and, moreover, that to do so is extraordinary. “I’ve been through so much with this body,” she writes. “How can I resent it and hide it away?” After all, she notes, “Bodies change. It’s brought me children, it’s gone through battles, it’s had cancer scares with lumps in my boobs, it’s fought mental illness, it’s wrestled with no sleep and been a home to three kids. Worrying about how big I look surely does it an injustice.” There is no “perfect” when it comes to pregnant bodies; not only do pregnancies not look the same from person to person, they don’t even look the same on the same person. And Mazza’s message is a powerful reminder both for herself and for other pregnant people that this is all OK. “I am happy, my children are happy and to me that is all that matters in life,” she says.

Mazza also has a message for everyone else, too — for those who aren’t or will not become pregnant themselves, but who feel the need to comment on pregnant people’s bodies, or on what pregnant people’s bodies will be like post-pregnancy, or any and all related situations: Someone being pregnant doesn’t mean their bodies are free for anyone to comment on in any way. This is true all the time, actually — it’s never anyone’s place to comment unsolicited on someone else’s body — but it’s especially true of pregnant people. There is no need to say anything like, “You’re so tiny!” or“You’re so huge!”, and it is absolutely not OK to police what they’re eating or put pressure on them to “get their post-baby bodies back” when they haven’t even given birth yet. As Mazza puts it, “The only time you should worry if something is too big or too small is the cake and flowers you’re gonna buy her for being such an amazing human being.”

More like this
An Honest Review Of The TikTok-Famous WalkingPad
By Kaitlyn Wylde
TikTok Is Using A Kendrick Lamar Song To Post Thirst Traps
By Courtney Young
Instagram Users Are Reporting Issues Scrolling & Logging In
By Courtney Young
What Does “Gatekeeping” Mean On TikTok? The Viral Term, Explained.
By Courtney Young
Get Even More From Bustle — Sign Up For The Newsletter