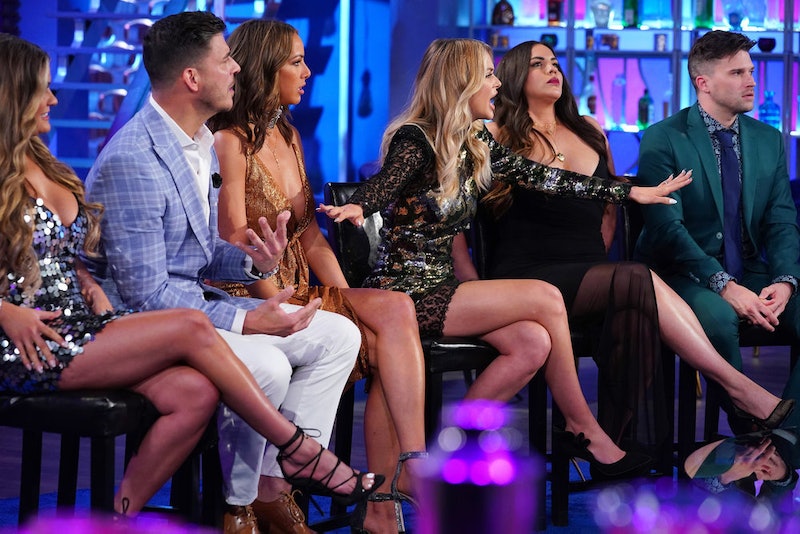 Nicole Weingart/Bravo
By Lindsay Denninger
May 7, 2019

Vanderpump Rules hardly has a dull moment — when you get this group together and enough alcohol, they tend to create drama no matter the situation. In Season 7, James managed to alienate himself from the rest of the group, Scheana moved to Marina Del Rey, Tom Tom opened, Lala descended into a grief-stricken madness, and Brittany and Jax started to plan their wedding. Part One of the Vanderpump Rules Season 7 reunion tracked pretty closely to the events of the season... except things got way, way more intense.

These people are genuinely friends with each other (well, minus James), and that's why they speak and scream at each other without abandon. They're so close that perhaps they know the person in the firing line will forgive them eventually (we've seen it happen time and time and again, after all). That said, there were some moments in the Vanderpump Rules Season 7 reunion that were completely and utterly unheard of — you know when Lisa is shocked, things are bad. These are the most WTF moments of the Vanderpump Rules Season 7 reunion so far. Buckle up, Vanderfans, because we are in for a really, really bumpy ride for the next three weeks.

Kristen & Carter Are Actually Broken Up

Not one person on the stage knew about this, and Kristen doesn't explain it at all. Just... presented, without comment. They're split.

James Gets Defensive, Part 1: The Freestyle

Part of the reason why James isn't friends with everyone has to do with a gross freestyle rap he did at the beginning of the season, which he only apologizes for because people yell at him. Then, he yells at Lisa for asking about his "freestyling" raps. Way to bite the hand that feeds, dude.

The Group Gangs Up On Lala

Lala doesn't think that Randall, her fiancé, needs to be on the show, which is crap, argue the rest of the Vanderpump gang, because Lala is not putting forth her truest life without her man on the show. Lala doesn't want to argue, so she says that her relationship is more important than all the others' on the show and that's that. Even Andy was like, "Oh, girl, no."

As Raquel talks about how she joined pageants to combat her intense social anxiety, James and Jax scream over each other to talk about Raquel calling herself a beauty queen. And then Brittany gets mad at Ariana for trying to let Raquel finish her thought. Uh, what now?

Raquel Will Join The Staff At SUR

Does Raquel know how to serve? Raquel is joining the staff at SUR, probably just so she and James have a reason to be there — they're not getting that employee discount anymore, remember?

Lisa Admits That The Toms Aren't That Involved In Tom Tom

When Lisa told both Toms that she'd write them both a check for their initial investment right now if they wanted out? Super awkward. It doesn't seem like the Toms know how business works — you can't draw a salary on a not-yet-profitable investment, guys.

According to James and the rest of the cast, Jax posed as Raquel with a fake Twitter account that he created. On it, he allegedly spoke badly about James and made allegedly homophobic comments. There's no evidence of this on the internet right now, but this is a huge accusation if so. Jax is an expert liar, so it's hard to know who is telling the truth.

James Gets Defensive, Part 3: Attacking Brittany & The State Of Kentucky

Brittany has to be on edge, because this woman never gets angry. After James attacked Kentucky and her family, calling them "hillbillies," Brittany. Went. Off. James continued screaming, Brittany screamed back, and Tom Sandoval defended James, which made Brittany scream more. Later, Jax said that Tom talks badly about him "all the time." There is definitely something brewing between Jax and Tom here.

They were fighting about... it's hard to know. Jax's dead dad and James talking about it and Jax creating a Twitter... In all honestly, these two have wanted to punch each other in the face for years, so it's hard to know what the real root cause is this time.

If the Part One of the Vanderpump Rules Season 7 reunion is any indication, Season 8 is going to be rough.