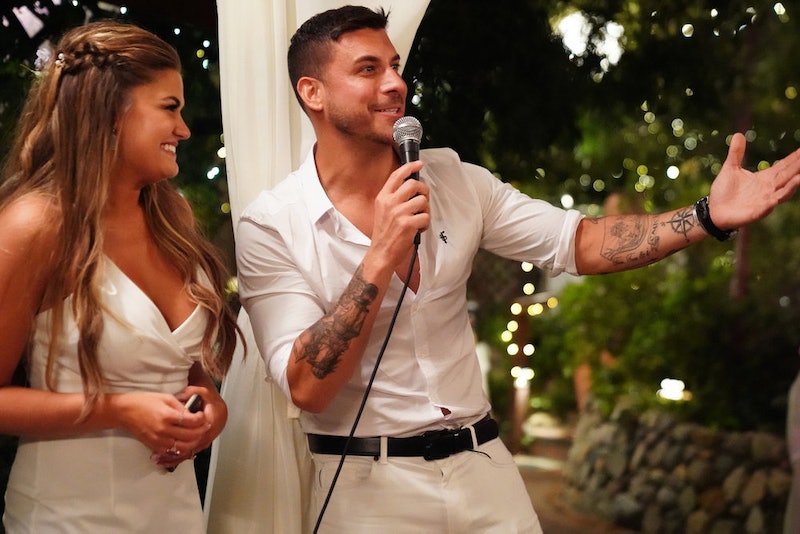 Seven seasons in, Vanderpump Rules has managed to make each season more dramatic than the last. But this is a show that knows how to one-up itself, and the Vanderpump Rules Season 7 reunion looks like the most intense one yet. Best friends Tom Sandoval and Jax Taylor are screaming at each other; Brittany is yelling back at Tom; James is doing that sniveling cry thing he does; and Katie is yelling at James (although no shocker there). Needless to say it's... a lot.

Season 7 actually wasn't that dramatic, as far as past seasons go. Most of the drama involved James being a nitwit and saying really mean things to the other cast members. Also, Stassi fell in love again (this time with a good guy), TomTom opened, and Lala and Jax both dealt with the sudden deaths of their respective dads. It seems as the Vanderpump Rules friends have gotten older, they've gotten somewhat wiser. They still drink a lot and party in Mexico, but at least they don't let the dumb stuff get to them... as much? In all honesty, it's been a pleasure watching the Vanderpump Rules crew get married and open businesses and make big-time adult decisions, but let's not pretend that everything is drama-free. Here are the biggest questions from the preview of Vanderpump Rules' Season 7 reunion.

Jax and Sandoval are two-thirds of a best friend crew that also includes Tom Schwartz, and they rarely ever fight. Yes, Jax slept with Kristen Doute, Sandoval's girlfriend at the time, seasons and seasons ago, but after Sandoval punched Jax, they got over it pretty quickly. Now, Tom is yelling about thinking something "is wrong," Jax says something about wanting to talk about Tom's mother, and then Brittany yells at Tom to stop it, because he's the best man in Jax's wedding. Dude. These guys never fight, so this must be something big.

Will Brittany Take Down James?

James is yelling at Brittany about her being a hillbilly, she is yelling back that she'd rather be a hillbilly than a sh*tty person... This is the angriest we've ever seen Brittany, and damn, it's kind of fun. It's nice to see her find her voice, and this would be the ideal time to throw out another "rot in hell."

Who Is Stassi Yelling At?

Stassi hasn't had like, uh, any beef this season, except for the occasional drunken fight with Beau, so who is Stassi yelling at that always seems to think he or she knows better than Stassi? Any takers? Any ideas?

When host Andy Cohen brings up the death of Lisa Vanderpump's brother, she starts crying and eventually walks offstage. Lisa is usually so put together on Vanderpump Rules (her time on Real Housewives Of Beverly Hills is a different story) that it's shocking to see her lose her composure. It's understandable why, it's just jarring to see.

Will James Be On The Show Next Season?

Here's a list of everyone who was mad at James Kennedy this season: Lala, Katie, Lisa, Jax, Brittany, Tom Schwartz, Lala, Kristen, Stassi, and, uh, actually, it might be easier to say who wasn't sparring with James this season — just Billie Lee, Raquel, and maybe Ariana and Tom Sandoval, on a good day. No one likes him, no one wants to be around him, and it doesn't seem like he's getting himself any goodwill on the reunion.

What Will Happen With Scheana & Adam?

In the April 29 episode, Scheana and Adam had a tearful breakdown about the status of their unofficial relationship. It seemed like it could be the end, but Scheana doesn't seem to say much during the reunion, and the couple-y pics she'd been uploading to Instagram have waned. Will we get any updates? This girl needs some screen time! She might regret moving to Marina Del Rey now.

Shut the curtains, make some popcorn, silence your phones, and strap in, Vanderpump Rules fans — the Season 7 reunion is going to be a bumpy ride.

More like this
Why Wasn't Teddi At The 'Bachelor In Paradise' Reunion?
By Brad Witter
Colleen Explained Her 'Love Is Blind' Body Language After Concerned Fan Reactions
By Grace Wehniainen
Meet Jungle Runner-Up Owen Warner's Equally Handsome Brothers
By Sam Ramsden
Are Jacob & Jill Together After The ‘Bachelor In Paradise’ Reunion?
By Grace Wehniainen
Get Even More From Bustle — Sign Up For The Newsletter