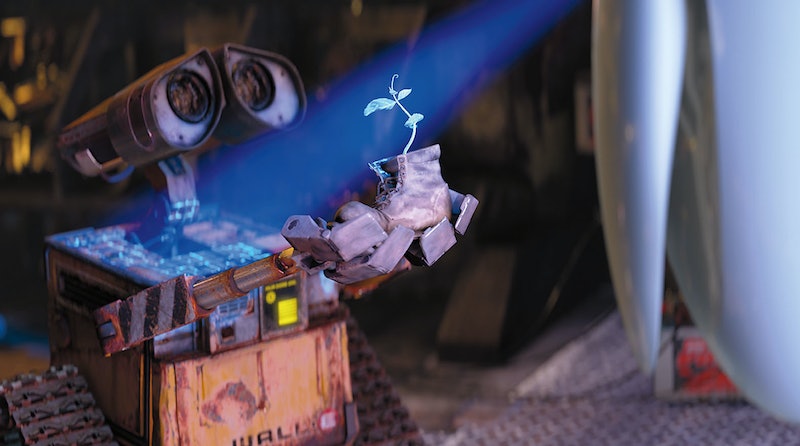 Animated films often come with tangible life lessons wrapped inside funny, heartwarming stories. Many times these lessons are subtle and require a bit of thematic digging to analyze, but other times, an animated film's message is perfectly clear — such as with Pixar'sWall-E and its theme of environmentalism. As the movie approaches its 10th anniversary on June 27, its earnest plea to save the planet feels even more relevant today than it did a decade ago. And while you deal with recent news of just how intense the effects of climate change have been, re-watch Wall-E to get actual steps for saving the planet. The movie offers a simple message that even small actions can make a big difference.

Arguably Pixar's most politically-driven movie, Wall-E tells the story of a lone service robot who continues to clean up a dry, dusty Earth long after humanity abandoned the overly polluted planet to live among the stars. The near-silent film uses silly slapstick comedy and expert visual storytelling to convey the loneliness of a lovable little robot, and the high-tech model EVE, with whom he falls in love. But while the cute robot love story is the main attraction, Wall-E's backbone is EVE's important mission: finding out whether or not life can exist on Earth again in order to bring humans back to it.

Together, Wall-E and EVE embark on a fun space adventure much like other epic sci-fi movies out there. But the film's second half, which includes the introduction of humans, actual dialogue, and a more action-heavy mood, is kicked off by Wall-E's discovery of a tiny little green plant, which he keeps potted in a dirty old shoe. This discovery instigates the action, sets EVE on alert, and triggers an entire system of change. It's no coincidence that Wall-E's plant is a wee, two-leafed stem. It's delicate, fragile, and could easily be crushed. The metaphor here isn't that the Earth is fragile, though — it's that our belief in our own abilities may be.

In light of the recent news that Antarctica has lost over three trillion tons of ice in the last couple of decades, as Nature reports, it might seem like climate change is an inevitable and unchangeable fact and that humanity's future on this planet is doomed. It can often feel hopeless to try and parse through the information and understand what exactly people have done to cause the rapid warming of the planet and what you can do now to help.

But thankfully, climate scientists believe that there's still hope; that humans can still slow the effects of climate change, and that we may not end up in disaster after all. Wall-E feels like it takes place in a reality closer to now than when it first came out, but that doesn't mean that its portrayal of a dusty, desolated Earth is inevitable.

But we all need to act, and Wall-E's small sprout of green can be our instigator, reminding us that even the tiniest actions can result in big effects. Wall-E the robot doesn't discover an entire forest, or even a field of green plants (at least not until the end). He and EVE have just one little plant, and one little plant is all they need to maintain their determination. So Wall-E's big message of environmentalism isn't just the grand idea that we need to save the planet, but that no action is too miniscule, and no plant too small. That little steps can lead to big results.

There are a lot of small actions you can take on our own to act on behalf of our environment. Fo one thing, calling representatives is vital to make your concerns heard. You can also attend local events or look into local sustainability. In addition, following websites focuses on environmental news and updates can make a huge differences in your awareness.

It's OK to start small, like Wall-E and EVE, and plant your own garden, or donate to funds that plant trees. Check out alternatives to fossil fuels, or even just start a new recycling program at your office.Wall-E's message is that even the smallest steps can lead to big change, and if enough people listen to it, we may yet save this planet after all.

More like this
Sadly, You Can’t Stream 'Minions: The Rise Of Gru'... Yet
By Morgan Leigh Davies
Anne Hathaway’s ‘The Devil Wears Prada’ Anniversary Post Turned Political
By Brad Witter
You Might Want To Rewatch 'Elvis' For This Britney Spears Easter Egg
By Grace Wehniainen
Everything You Need To Know About The 'Knives Out' Sequel
By Grace Wehniainen
Get Even More From Bustle — Sign Up For The Newsletter