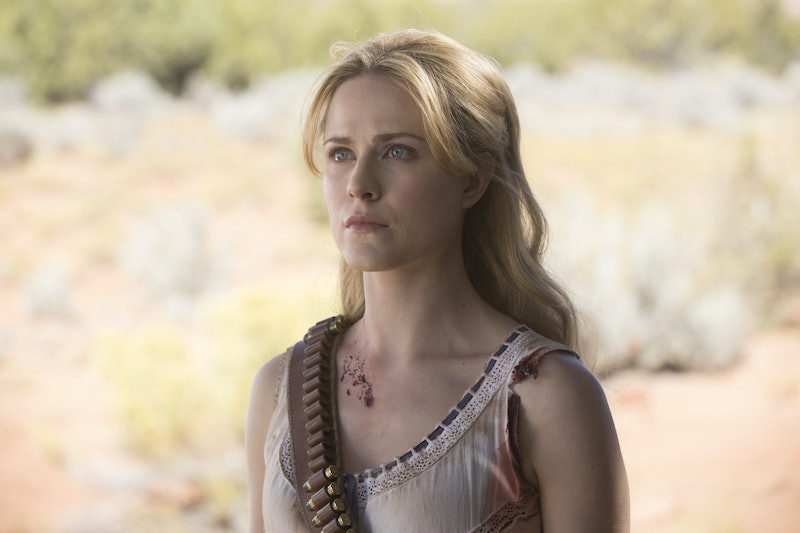 Viewers have known from the beginning of the season that the host uprising was bound for turbulence, given the presence of all those dead robot bodies floating in the mysterious lake. But even the most devoted fan probably didn't predict exactly how apocalyptic the finale would be for the hosts, which almost entirely wipes the artificial lifeforms from existence — including Dolores. Towards the end of the episode, every single host in the park has either passed through the Door (zapping themselves into a virtual reality existence) or slaughtered each other under Clementine's corrupting influence.

At one point, Bernard is literally the only host left alive, having shot and killed Dolores to prevent her from destroying the Forge — and thereby all the human and host lives that were stored there. Even when Dolores is resurrected in the finale's most shocking twist, it's in a brand new form: inside a copy of Charlotte Hale's body, her consciousness placed there by a regretful Bernard, allowing her to walk out of the park unchallenged to infiltrate the real world.

So if Dolores is now in Charlotte's body, is that it for Evan Rachel Wood? The loss of the show's top-billed star would be a major and controversial blow, much like Sean Bean's departure from Game Of Thrones after being Season 1's highest-profile name. Like its HBO sister series, Westworld probably could live on without Wood — but fortunately, it probably won't have to.

In the final sequence of the episode, Bernard awakes after having been killed by Charlotte/Dolores back on the island, to discover that he had been reconstructed on the mainland, in a secret lab set up by Ford in Arnold's old house. Helping bring him back to consciousness is Dolores — or some version of her — in her old form. Confusing matters is the fact that host-Charlotte is also there, lingering outside the observation room. If Dolores is still inside Charlotte, then who's inside Dolores? Would the Dolores interviewing Bernard be another figment of his imagination, a manifestation of his inner voice like Ford?

It seems more likely that Dolores built a new body for herself just like she built a new body for Bernard, and replaced her consciousness back inside her recognizable form. That's good news for Evan Rachel Wood fans, but still leaves some questions. Namely: if she's no longer inside the host-Charlotte body… then who is? Host-Charlotte walks out of the park with a purse full of host mind-pearls, but there's no telling who they belonged to. (Hopefully one of them was Maeve's; but if so, hopefully Dolores also builds Maeve a new version of her old body and doesn't just place her inside the empty Charlotte body, since it would be a shame to lose Thandie Newton.)

Regardless of what exactly is going on inside Arnold's house — and who's in which body and which other hosts Dolores brought with her — at least fans don't have to worry about Evan Rachel Wood going anywhere. Back in April, HBO rather widely and publicly announced that Wood would be receiving equal pay to her male co-stars for Westworld's third season in response to the outrage surrounding the gender pay gap in Hollywood.

Using that announcement as a smokescreen to hide Wood's impending departure from the show would be in extremely bad taste. While actors and showrunners can and do often lie to hide big twists (looking at you, Kit Harington), this almost certainly isn't one of those cases. Wood — and therefore Dolores — should be back for Season 3, refreshed and ready to take over the world.

More like this
Watch The Thrilling Teaser Trailer Of 'Shadow And Bone' Season 2
By Gretchen Smail, Jack Irvin and Sophie McEvoy
Here's The Full List Of Zach's Confirmed & Potential 'Bachelor' Contestants
By Kadin Burnett and Grace Wehniainen
The 'Bachelor In Paradise' Schedule Shifts To 4 Hours Every Week After The Season 8 Premiere
By Brad Witter
Who’s The Richest 'Grey’s Anatomy' Star? See The Net Worth Of Each Cast Member
By Hugh McIntyre
Get Even More From Bustle — Sign Up For The Newsletter