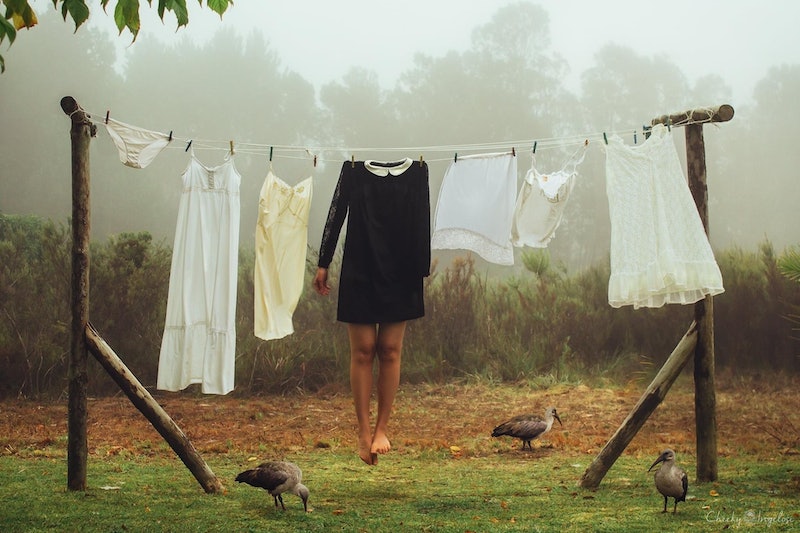 Describing depression isn't easy. It's more than sadness. It's emptiness, hopelessness, a place so deep and dark that trying to explain it to someone who hasn't experienced it can feel impossible. But one artist described depression through photography, though, and it might give you a glimpse into the mind of people suffering from this oftentimes debilitating illness.

Janelia Mould, who works under the name Cheeky Ingelosi, is a fine art photographer from South Africa. She focuses on conceptual and portrait photography; and using her work, she allows us a look into her own mind. Her photography has a beautiful eeriness to it, using a style and aesthetic that are uniquely hers. She's entirely self-taught — a huge accomplishment in and of itself. "I am actually a qualified bookkeeper but have laid down the books to pick up my camera full time, about two and a half years ago," Mould tells Bustle in an email. "I got my first little camera when I was about 11 years old, so photography has always been a hobby of mine and my poor friends and family had to be subjected to it." Mould was looking for a way to express herself artistically, but other endeavors — like drawing and painting — just didn't seem to fit.

It was eventually in Brooke Shaden's work where Mould found her inspiration, and she went on this journey of self-exploration and expression. "... I am constantly looking for ways to improve my work."

The ongoing series of photos that's getting quite a bit of attention right now is entitled, "Melancholy — A Girl Called Depression." Mould, in her post on Bored Panda, explains that the purpose of "Melancholy" is to "give the outsider a peek into what emotions or lack thereof such a person might feel." Talking to Bustle, she says that it's "a very personal project for me because depression has touched my life, therefore it's subjective on how I experienced it. You can say I was inspired by my own struggle and use my photography as an therapeutic outlet."

Some of these characters are missing faces and limbs — a choice Mould made to show how some people suffering from depression live: incomplete. "I left out the head of the subject in this series because I thought others that suffer with mental illness could perhaps identify with her. In most of my general conceptual images the character is usually without an identity, the face is almost always covered fully or partially or the face is turned away."

According to the Anxiety and Depression Association of America, major depressive disorder affects over 15 million American adults every year, and it's more prevalent in women than in men. Additionally, persistent depressive disorder affects about 3.3 million people every year. Finding an answer to depression is not an easy task; many people don't respond to traditional medication. And another matter entirely is the friends and family of those suffering, who share in the experience with them. It can be hard for those close to someone with depression to relate to the feelings; but something like "Melancholy" might very well help them get a better feel for this common mental illness.

While Mould has been met with incredible success through her latest work, it wasn't exactly planned. "To be very honest with you, I did not expect that this project would receive so much attention and I am very humbled and super excited by it," she tells Bustle. "I just wanted to make art by using my own life experience and share it. ... If this photo series can help anybody in anyway, it will make my heart so happy, whatever message they take from it."

Mould is an incredible artist with a beautiful vision. You can visit her website here, and also check her out on Facebook.