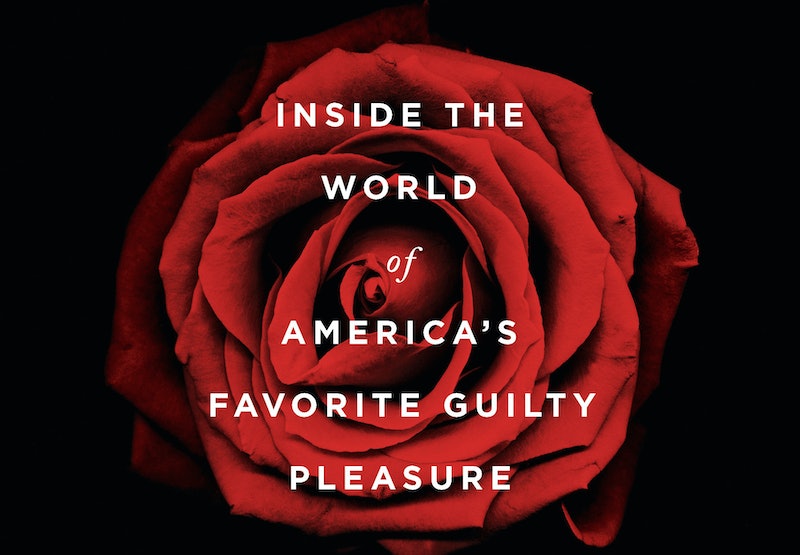 There are a lot of hard-to-believe, and sometimes downright upsetting stories in Los Angeles Times reporter Amy Kaufman's book about the Bachelor franchise titled Bachelor Nation. Kaufman has dozens of sources, from contestants to producers, talking on the record about what they claim really goes on behind the scenes of the popular reality show. But fans shouldn't get too hung up on the shocking details alone. Instead, every fan should read Bachelor Nation before Becca's season to make an informed decision about how (and if) they want to continue to watching the show. It's a tough question, and one Kaufman tells me she had to answer herself after writing it.

There's no denying that Kaufman's book is shocking. Producers allegedly used interview tactics that former contestant Chris Bukowski compared to police interrogations. "I was saying lines verbatim from producers because I'd been sitting in a stupid room for an hour and just wanted to go," Bukowski says in the book. "You would say something you totally didn't even believe or want to say, but they just kept asking you and asking you and asking you — just like you're being interrogated." (ABC declined to comment on the claims in Kaufman's book.)

In another section, Kaufman printed an alleged producer-annotated binder of contestants from Season 5. The notes include things like, "First love ended up cheating on her—GET THIS!!" and "CRYING IN INTERVIEW regarding her brain surgery." And, simply, "Jewish." Kaufman also printed portions of an alleged contract that reveals just how much of their rights these stars allegedly sign away for the shot at possibly being humiliated on national television. According to this version, "[producers] may intentionally or unintentionally make misrepresentations or omissions concerning the Series." And, Kaufman writes of another section, "[Filming] conditions may expose you to 'severe mental stress' and you cannot seek 'refuge' anywhere cameras aren't allowed."

This book stirs up a lot of the same conversation that Lifetime's UnREAL did. The key difference, though, is that UnREAL, though created by a former Bachelor producer, is a fictional show. In Kaufman's book, people behind the scenes went on record to discuss what they knew about the sorts of alleged stories that sound straight out of UnREAL — like how producers allegedly tracked female contestants' periods so they could interview them during more vulnerable times.

If UnREAL made you question how The Bachelor franchise really works, Kaufman's book may make you question if you can still watch knowing all this. In short, if you're a longtime fan of the series, it may be hard to swallow some of the things you learn about this beloved reality show. But Kaufman does acknowledge that the franchise doesn't necessarily still operate the same way her former producer sources say.

"To be fair I don't think they do things that way any more — like handing out $100 bills [as bribes to producers to encourage certain contestant behaviors] and tracking their periods and stuff that we see in UnREAL, because a lot of those [producers] are gone," Kaufman notes. But, now she's fascinated and concerned about a new level of producer/contestant interaction: Friendship. "[You see] producers are posting pictures on Instagram with the contestants and they hang out with them. In a way, it's almost a deeper manipulation because you can't tell where the lines are between them doing a job and being authentically your friend," she says.

It's these kinds of conversations about dynamics behind the scenes that Kaufman wants to have. She doesn't want her book to necessarily make fans swear off the series. "There is a lot of shady stuff going on behind the scenes," she says. "I hope the book is more than just a listicle of shocking things ... I want to talk about why we watch it, what's happening psychologically to the people in that situation, and why would we even want a guy like the Bachelor in our lives." And, beyond that, why some female viewers are so quick to criticize the female contestants. "I hear so many [women] who are like, 'Oh my god, [female contestants] just go on [the show] and they give up their entire life and they just want to get married and move to that guy's city.' It's like, OK, what if a woman does want that?" Kaufman says. "It's OK to say you want to get married and you want to focus on the relationship." After all, part of being a feminist is letting women make the choices they see fit for their own life.

Kaufman, though, is determined to keep watching, even knowing everything she does — because if no one is watching critically, nothing good can come out of it at all.

"I actually don't think these issues would be solved if we all just stopped watching," she writes in the book. "There are bigger, more fundamental questions that we need to be grappling with: Why are so many of us desperate for the type of fame that television can bring? Why is it so easy — and so fun — to judge others from the privacy of our own homes? And why do so many of us depend on romantic love to validate our worth?"

Kaufman wants to give fans the information — and let them decide for themselves if and how to consume the show going forward. For her, knowing a bit more about what supposedly goes on made watching the show a better experience. "It was so baffling to me that I was watching people say, 'I love you' after four seconds or, you know, propose in such a short timespan. It's so unnatural," Kaufman says of what she initially thought of the show. "Then, when I spoke to people and understood just how cut off they are, just how isolated they are, just how much they come to confide in the producers and the tactics that the producers use, I was like, 'Oh wow, OK, I would probably do the exact same thing.'"

Kaufman was so taken aback by the scope of what her sources claimed goes on behind the scenes that she offers a stern warning to future hopefuls. "I would not advise anyone who I know [to go on], no matter how smart, self-aware, self-assured they are — I don't think you can control yourself in that environment."

So much work goes into constructing this fairy tale narrative, and Kaufman wants viewers "just to be more mindful of what you're watching, to not take it for face value." She adds that though she wouldn't advise her own friends to go on, she understands that everyone needs to make that choice for themselves. "I'm not writing this as a way to dissuade people from going on," she says. "I just think that if you are gonna go on, you should know all the things that could happen to you, you know? And before this [book], I'm not sure people did."

So, the next time you see a sobbing or scheming contestant, take a moment to reflect on why they might be acting that way. You can keep watching the show if that's what you want, but if you read Kaufman's book first, you'll get to watch with all the facts.

More like this
It’s Official: 'The Bachelorette' Is No Longer A Fairy Tale
By Samantha Allen
Everything To Know About 'Bachelor' Host Jesse Palmer
By Justice Namaste and Radhika Menon
Here's Our Ranking Of The Funniest 'Bachelor' Casting Ad One-Liners So Far
By Grace Wehniainen
Former 'Bachelor' Producer Elan Gale Knows The Secret To Your Favorite Shows
By Samantha Rollins
Get Even More From Bustle — Sign Up For The Newsletter