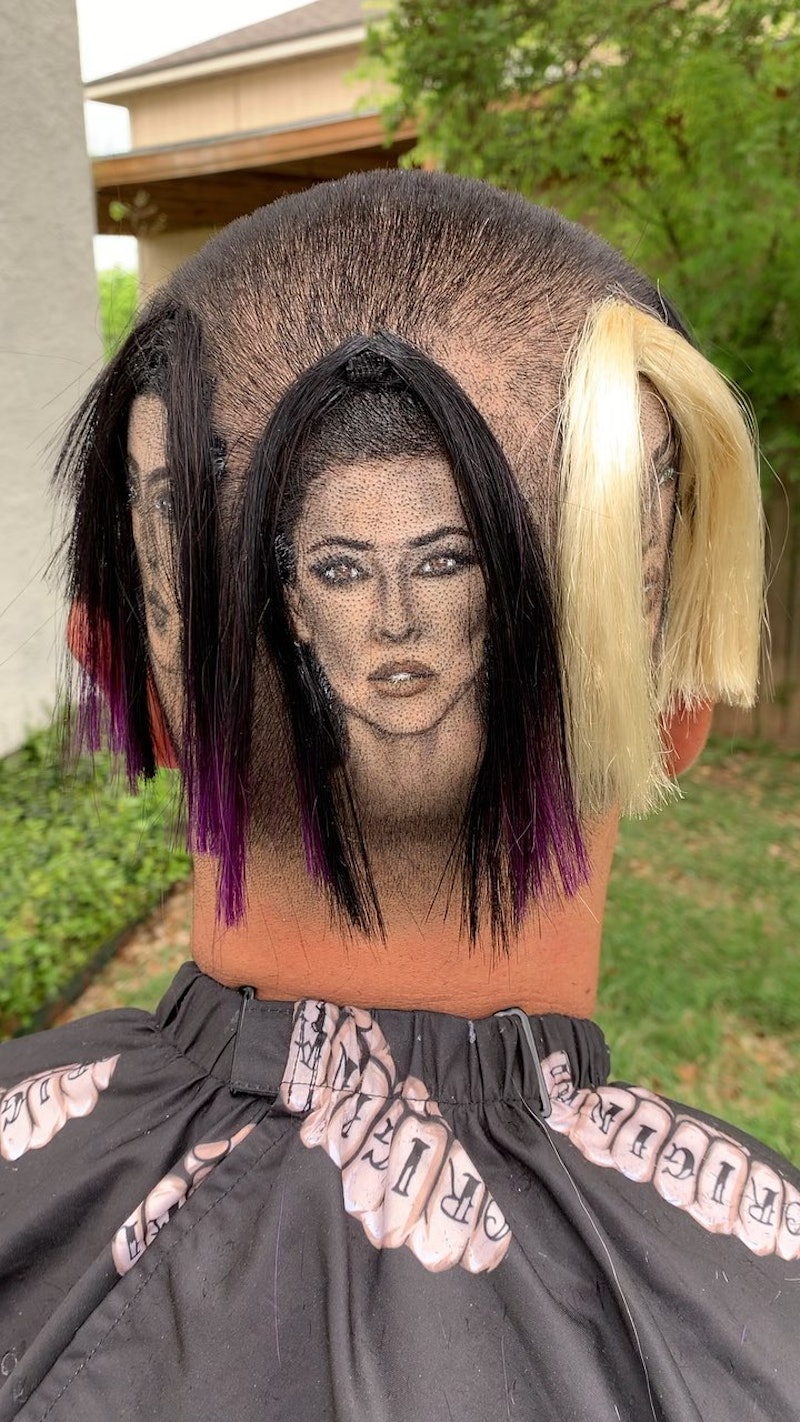 When it comes to celebrity hair changes, no one seems to switch up styles as frequently as the Kardashian and Jenner women. From blonde to pink to even mermaid green, the sisters know how to make a hair impression. Now, though, a barber shaved the Kardashians' faces into someone's head, and the look could just be even better than some of the reality stars' most famous styles.

On April 9, Kylie Jenner reposted a video from one of the family's talented hairstylist César Ramirêz. In the video, viewers were able to see a man's head that had all five of the Kardashian and Jenner sisters shaved into it. Yes, that means Kourtney, Kim, Khloe, Kylie, and Kendall were all meticulously stenciled into someone's actual hair — but that wasn't all. Each of the five faces came complete with their hairstyles perfectly cut and placed around their faces. The result was at once terrifying but also incredibly impressive. Clearly, the Kardashians thought so as well.

Once Jenner reposted the video to her Instagram, big sister Kim Kardashian did the same, and both the sisters and hairstylist Ramirêz seemed to love the creation. As for who's responsible, it's Texas-based barber Rob The Original.

Turns out, Rob actually created the 3D Kardashians about a week ago, and Kim Kardashian noticed the post then. In an image of the style from March 27, Kardashian commented, "So insane!!!" with three flame and three heart emojis. Kardashian wasn't alone. Her long time makeup artist Mario Dedivanovic also commented on one of the videos with an "OMG" and a laughing crying emoji. Now, the world is getting to see more of Rob's artwork, and let's be honest regardless of what you think of the Kardashians, this is artwork.

As for Jenner's reaction, she reposted the video with a simple "OMG! Lol," but the repost shows her appreciation for the style.

Of course, the 3D Kardashians are far from Rob's only impressive work. One look at his Instagram account, and you'll see a plethora of recognizable people and characters. In fact, one of his most recent creations is a hyper realistic Selma Bouvier from The Simpsons complete with a cigarette. Essentially, it appears that if you bring a photo to Rob, he can carve the look into your hair.

Could the Kardashians take the plunge and make a trip to Rob's chair? For these women, wigs, not actual cuts, seems to be more of their style. In fact, some of the Kardashian ladies have changed things up just recently.

A little under a month ago, Kim Kardashian took to her Instagram account to debut mermaid green hair. The reality star, however, was cryptic about what the look was for, and the next day, she was back to her dark locks thanks to the wig work.

The, there are temporary color jobs. Back in December, Khloe Kardashian appeared to embrace pink hair a la her little sister Kylie Jenner. The pink hues look so good in her hair, and the color wasn't a wig. It was, however, just a temporary change done by stylist Andrew Fitzsimmons.

The Kardashian and Jenner women, with their love of temporary hair looks, probably won't be paying Rob the Original a visit soon to make a more permanent change. But clearly that doesn't mean they don't appreciate his Kardashian-inspired work.