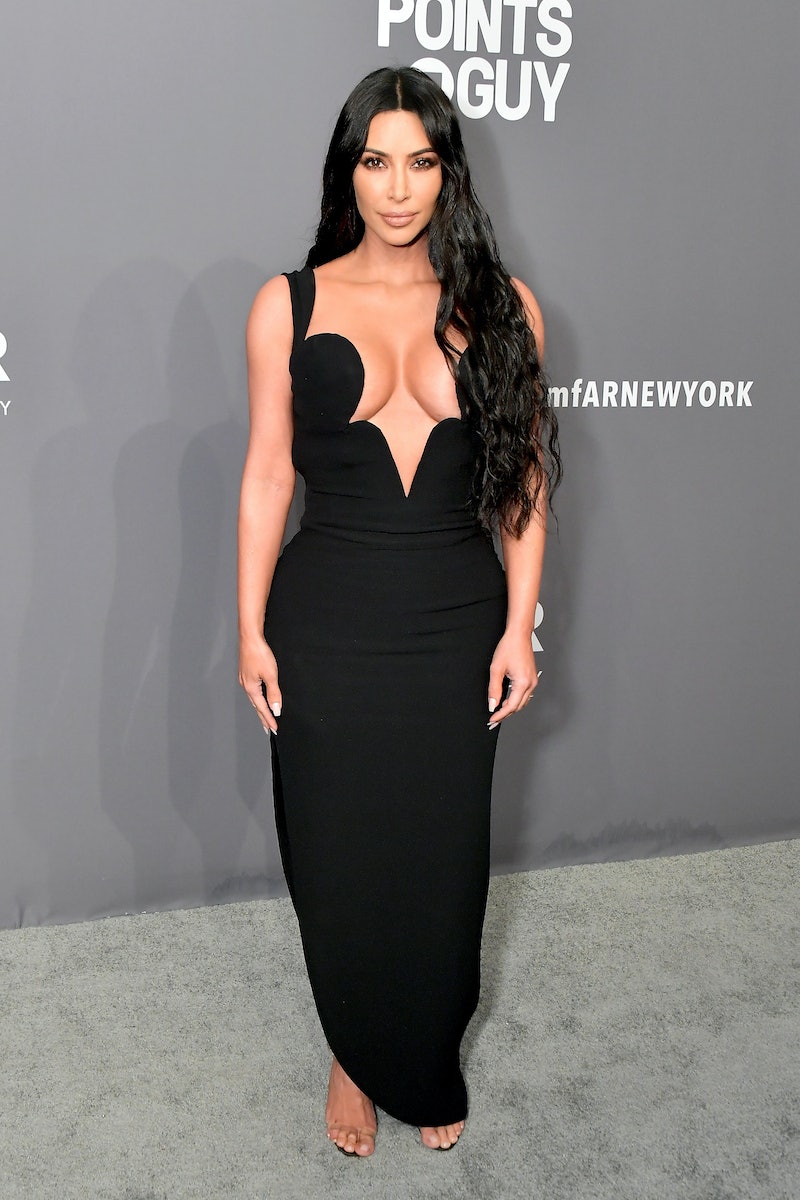 No celebrity knows how to document a hair change like a Kardashian. Now, there's another new look to feast your eyes upon thanks to Kim Kardashian's green hair. Yes, green, but don't worry — Kardashian isn't giving you swamp creature realness. She's embracing her inner mermaid.

On March 13, Kardashian took to her Instagram to showcase a brand new 'do, and no, she hasn't gone back to her platinum blonde locks. The KKW Beauty mogul's hair is a soft, pastel green, and she must have been feeling the mermaid vibes. When she posted the image of her long, wavy, beach-ready hair, she captioned the photo with a mermaid emoji, and the character is so accurate. Plus, doesn't everyone want to be a mermaid?

In the photo, Kardashian is leaning forward while someone smooths out her new pastel green locks, and while her hair does look real, it's definitely not. Not only was the reality television star and makeup mogul brunette on both her and her sisters' Instagram stories last night, but she's rocked a colorful wig so many times in the past that it's unlikely she'd stop now. The mermaid locks are likely a wig. A great wig, but still a wig.

As for who is responsible for creating the mermaid-esque hair, Kardashain's longtime hairstylist Chris Appleton is tagged in the photo. You may remember that Kardashian accompanied Appleton to the Hollywood Beauty Awards earlier this year wearing her now infamous Mugler dress.

Kardashian hasn't revealed any reason why she decided to go green, but St. Patrick's Day is coming up. It's nearly spring. If you can change your hair with the seasons, why not?

Kardashian did tag both KKW Beauty and KKW Fragrance in her photo. Of course, she's probably wearing her own products which could warrant the tag. But there's also always the chance that she's shooting a new spring campaign for both of her beauty lines.

If that's the case, it wouldn't be the first time that Kardashian has changed her hair based on her products. Back in February, Kardashian launched three new KKW Kimoji Heart Fragrances in Baby Girl, Wifey, and Baddie. In each of the three marketing images, she's rocking hair that corresponds to the shade of the bottles. Clearly, they were all wigs, making it even more plausible that Kardashian hasn't actually dyed her hair green this time, either.

Plus, Kardashian's new green hair isn't even the first time she's worn a more vibrant color. While in Miami in August of last year, Kardashian had the most extra but amazing moment ever when she matched her hair to her lime green Lamborghini. A few months earlier, in Feb. 2018, she went bright pink on her Twitter account.

Clearly, Kardashian isn't afraid to rock a bold hair color, and her new mermaid green look is almost certainly a wig, When your hair looks that flawless, though, it doesn't really matter.