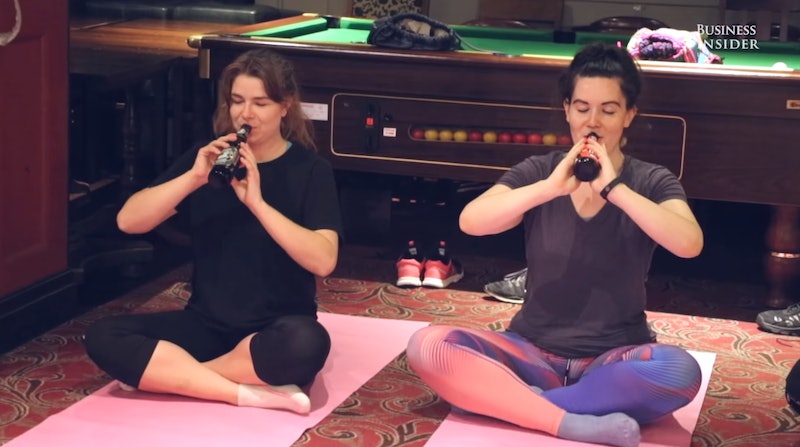 For anyone who has ever faced the struggle of choosing between going to the gym or cracking open a cold beer, good news: You can do both at the same time. A Business Insider UK video of beer yoga classes currently being offered in London is tearing up the proverbial charts — and it’s not hard to see why. I mean, who wouldn’t want to get their om on while they enjoy an icy cold brew?

The classes are hosted by Funzing UK, a website and community that helps connect folks offering “fun, unique experiences” with people looking for activities that are a little more off-the-beaten-path than your typical day or night out might be. The Funzing community is open to anyone to join; if you’ve got a skill, passion, or hobby that you think would be an exciting Funzing experience, you can create an event for it.

That’s where Beer Yoga comes in. Taught by yoga instructor Guzel Mursalimova, this hour-long Vinyasa class — Vinyasa Flow being the most popular form of yoga in the United States — takes place in a London pub and involves balancing and sipping a cold beer while you do your Tree and Warrior poses. As the event’s page on Funzing puts it, “Beer Yoga is the marriage of two great loves — beer and yoga. Both are centuries-old therapies for body, mind, and soul. The joy of drinking beer and the mindfulness of yoga complement each other, and make for an energizing experience. We take the philosophies of yoga and pair it with the pleasure of beer-drinking to reach your highest level of consciousness.” Said Mursalimova in Business Insider’s video, “The goal is to make people stress-free, relaxed, happy — and if this means that you have to incorporate beer, I think that’s perfectly fine and I think that’s encouraged.”

If you’re thinking, “Hmmm… yoga with beer? That sounds kind of familiar,” there’s a reason for that: Earlier this year, a duo of yogis in Germany made the news for their Bier Yoga classes — and they had originally seen it at Burning Man. It’s not a new thing — and honestly, both beer and yoga have been around for so long that I’d be extremely surprised if no one had ever thought to mix the two centuries ago — but it’s clearly gaining steam and popularity; it’s been popping up all over the world in recent months. In fact, it appears I missed a class that occurred in Washington, D.C., where I live, just last month. Heck, beer yoga even has its own (very short) Wikipedia page these days.

It’s not without its opponents, of course. Experts speaking to the Hindustan Times earlier in 2017 noted that “There is no health benefit to [beer yoga],” calling it “another marketing gimmick to make yoga popular and get people into it.” Additionally, as Jake Panasevich recently wrote over at U.S. News and World Report, beer yoga (and other trendy yoga classes, like goat yoga or cat yoga), can be distracting, which might actually negate the benefits of practicing yoga in the first place. “If you are going to yoga with the goal of getting high or buzzed, at least do so after yoga and not before or during class,” recommended Panasevich. “Not being able to tell your right arm from your left leg is not a healthy practice. Yoga and life should be enjoyed naturally. Anything that alters your natural state of mind is no longer yoga in my book.”

But, honestly? Beer Yoga looks like a heck of a lot of fun. Take a peek:

The cost of the Funzing Beer Yoga class is £12 (about $15); it includes an hour of Beer Yoga, including one bottle of beer, and use of a yoga mat for the session. The venue apparently also has darts, pool, and ping pong,as well as other deals on food and drink — although alas, I cannot tell you exactly where the venue is, as it’s only revealed to participants after they buy their tickets. I can, however, at least tell you the area of the city it’s in; according to the event page on Funzing, the pub is located around Old Street in the EC1V 9BP postcode.

And hey, guess what? If you’re located in London, there are plenty of upcoming dates available. What’s more, most of them are on Saturdays, making them the perfect weekend activity. Head on over to the Beer Yoga page on Funzing to check it out. Bottoms up!

More like this
How To Make The Grinder Sandwich TikTok Is Obsessed With
By Emma Garza
Kris Jenner’s Advice For Kim Kardashian Is Going Viral On TikTok
By Courtney Young
The Viral TikTok “30,000” Sound Fits Nearly Every Scenario
By Courtney Young
4 Zodiac Signs Most Likely To Be “That Girl”
By Kristine Fellizar
Get Even More From Bustle — Sign Up For The Newsletter