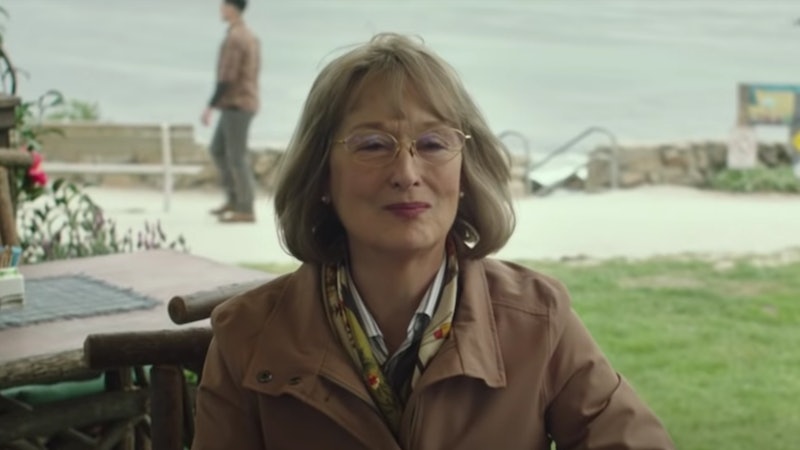 While secrets unravel in the affluent California beachfront town of Monterey, another mystery may have just been answered for in the Greek island of Skopelos. Following its return to HBO on Sunday, June 9, fans have noticed that this Big Little Lies Season 2 theory has an unexpected connection to a Meryl Streep movie that is definitely iconic.

In the premiere, Streep made her highly-anticipated debut on the second season of Big Little Lies as Mary Louise, the grief-stricken mother of Perry (Alexander Skarsgård). During Mary Louise’s stay with her daughter-in-law Celeste (Nicole Kidman) and two grandsons, the formidable matriarch lets it be known that: 1. She finds little people untrustworthy, and 2. She finds the circumstances surrounding her son’s death suspicious, indeed. Now, on the heels of the grief-stricken scream heard ‘round the dinner table, fans are contending that Big Little Lies actually shares a cinematic universe with Streep's 2008 romance musical Mamma Mia!

On June 10, Twitter user @isteintraum made the cinematic connection with the tweet, “If Meryl Streep’s son is Alexander Skarsgård I believe we finally have the answer to who the real dad is in Mamma Mia.” The acute observation resulted in minds blown across the internet, with one user responding with, “Please go sit in a corner and think about what uve done.”

It’s already been done. As fans will recall, Streep starred in the Mamma Mia! films as Donna, a fiercely independent hotel owner residing in the Greek islands. While she’s preparing for the upcoming wedding of her daughter Sophie (Amanda Seyfried), Donna is oblivious to the fact that Sophie has invited three men from her past in an effort to discover who her father is, so she could be escorted down the aisle. The film starred Pierce Brosnan, Colin Firth, and Stellan Skarsgård as Sophie’s potential fathers. Here’s where the Mamma Mia! and Big Little Lies narratives respectively intertwine: not only does the latter, Stellan Skarsgård, depict Bill Anderson, one of Donna’s former flames in Mamma Mia!, but Skarsgård is the real life father of actor Alexander Skarsgård. In turn, fans have concluded that within this shared cinematic universe, Sophie’s real dad must, in fact, be none other than Bill Anderson. In short, Sophie and Perry are siblings somewhere within the cinematic realms of BLL and Mamma Mia! It’s a lot to take in.

Following the observation, fans collectively lost their minds. Twitter user @zoe_samuel wrote, “Does... does this mean that Amanda Seyfried is Alexander Skarsgård's sister? Is this why they have the same initials?”

Twitter user @gingerkelli found it hard to process such news so early in the day.

Meanwhile, others were rendered speechless and responded simply in gifs.

Delightfully so, Mamma Mia! wasn’t the only film crossover present in BLL’s triumphant Season 2 return. In one particular scene, Jane (Shailene Woodley) is dancing along the sandy shores of the beach while Sufjan Stevens’ “Mystery of Love” — written for the 2017 romance Call Me By Your Name — softly plays in her earphones. The song reference did not go unnoticed, with Twitter users reveling at the usage, as well as Vulture penning the delightful piece “Who in the Big Little Lies Universe Has Seen Call Me by Your Name?”

Given these crossovers, there’s only one question left to ask: does Big Little Lies, Mamma Mia!, and Call Me By Your Name somehow all exist within the same great cinematic plain?

More like this
'Inside Man' Was Inspired By 'Sherlock' In The Most Unexpected Way
By Catharina Cheung and Maxine Harrison
Ruth Wilson’s New Thriller Spotlights A Controversial Irish Institution
By Darshita Goyal
Nazanin Boniadi Was A Healer Long Before 'The Rings Of Power'
By Olivia-Anne Cleary
Paul Mescal, Man Of Mystery
By Samantha Leach and Heather Hazzan
Get Even More From Bustle — Sign Up For The Newsletter