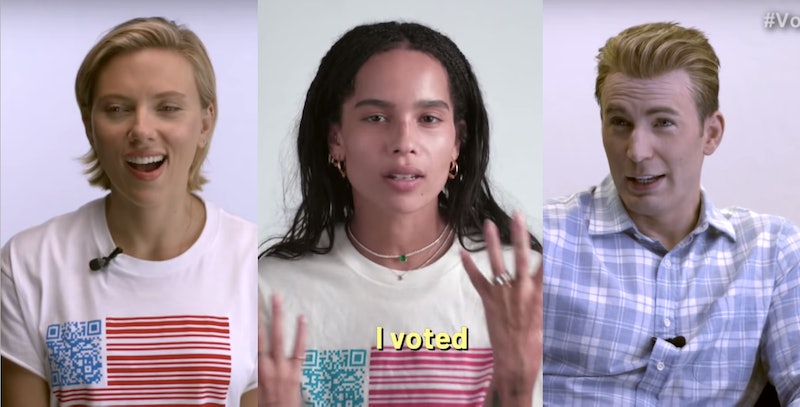 March For Our Lives/YouTube
By Parry Ernsberger
Oct. 2, 2018

What do you remember about your first time? Was it quick and painless, or did you take your time? Did you feel confused, excited, nervous, or uncomfortable? In March For Our Lives' new "My First Time" voting PSA, a slew of celebrities (including Scarlett Johansson, Chadwick Boseman, and Chris Evans) and activists (like the organization's co-founders and Parkland survivors, Delaney Tarr and David Hogg) reveal intimate details about what their first time was like — their first time voting, that is.

Did that make you blush a little bit at first? Well, you're probably not alone in that. The PSA opens with Boseman stating, "My first time," before the camera quickly cuts to Johansson, who fills in the blank. "I was ... nervous," she says sheepishly. Zoë Kravitz's first time, according to the video, "was in the back of a fire house." Don Cheadle's was "in a church," and Mark Ruffalo admits he "didn't know how to do it."

At this point in the PSA, it's easy to understand why you might be thinking that these stars were talking about ... well, definitely not voting. Voting is probably the last thing on your mind for the first few seconds of the video — especially with Foreigner's decidedly non-patriotic "Feels Like the First Time" playing in the background — which is exactly why the whole thing is so damn brilliant.

Boseman then discloses that he "didn't know where to put it, where to slide it in," during his first time, and Rosario Dawson recounts that "there were so many options." Still blushing? Understandable.

Eventually, though, Kravitz reveals the gag. "So finally, I just ... you know, I just went, and I just did it," she tells the camera. "I voted." *Record scratch* Wait, what did she just say? Did she just say that she voted? Is that some sort of innuendo the youths are dropping these days? Nope. March For Our Lives got jokes, y'all.

Evans continues to carry the joke in the next clip, confessing that his "first time with a woman was 2016." Get your mind out of the gutter! He's talking about voting, remember? "It felt good," he continues, "but it ended badly."

Considering Evans' recent rebuttal to Kanye West's Make America Great Again photo and correlating tweet, the woman in question could very well have been '16 presidential candidate, Hillary Clinton. As for the part that "ended badly"? Well, that probably goes without saying.

The tail-end of the PSA is all about empowerment, and serves as a reminder that you have to register before you can vote. Don't forget to register! You can do that on MarchForOurLives.com, by the way, and as Tarr notes, "it takes like, two minutes." She's not wrong.

It doesn't matter if you're a seasoned pro, or if the upcoming midterm elections will be *your* first time. Do your research, make sure you're registered, and get on out there and vote on Nov. 6.