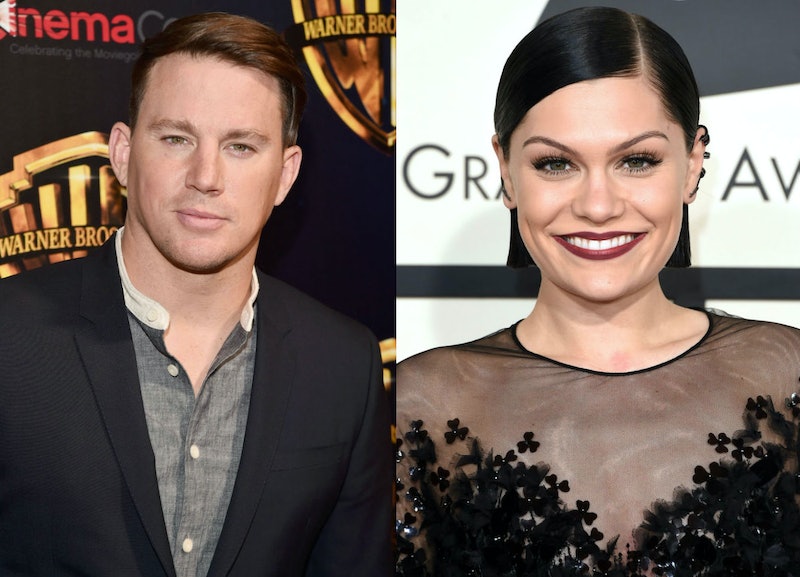 Ever since reports broke about this rumored celebrity couple, fans have been in need of immediate details. Well, here's an important Channing Tatum and Jessie J update from People. According to the publication's Wednesday report, Tatum and Jessie J are taking their reported romance as slow as possible. It sounds like getting to know each other is at the top of their list, in addition to staying out of the spotlight.

"They want to keep it low-key," a source said about them. The source also told People that Tatum's responsibilities as a father to Everly, his 6-year-old daughter with ex Jenna Dewan, remain his priority. He and Jessie J reportedly also try to set as much time aside as possible to hang out, when they're not busy working.

"He works around the clock, loves being a dad and has a decent relationship with Jenna," the source claimed. "Jessie J is also dedicated to her career and has a real sense of humor. She likes to have a good time. It is an exciting time for both of them."

Tatum also apparently finds Jessie J's performances "sexy" and thinks her voice is "amazing." The source told People, "He loves music, likes to dance and loves the whole performing aspect of his own career." A "film source" also made it clear that they aren't seriously involved, but taking their rumored relationship one day at a time.

"It’s a new thing for them and too early to see if it will go anywhere," the "film source" said. "But for now they are having fun and getting to know each other."

On Oct. 10, Us Weekly first reported about Tatum and Jessie J's rumored involvement. According to the website, they've been hanging out for a couple months and the Magic Mike star was reportedly spotted at two of Jessie J's concerts in October. Per Us Weekly, a social media user even saw them playing mini golf together in Seattle. (At the time of the report, Bustle reached out to Tatum and Jessie J's reps for comment, but did not immediately hear back.)

Dewan, who was married to Tatum for eight years, is also reportedly back on the dating scene. On Wednesday, Us Weekly reported, that the former World of Dance host "is seeing someone new," but he isn't "well known."

In September, People also reported that both Dewan and Tatum were dating other people. A source said, "[Jenna] has been on a few dates but doesn’t talk about a boyfriend." Another insider told the publication that Tatum was having fun dating, but it wasn't anything "serious."

In April, Dewan and Tatum announced their split. They also made it clear in their breakup statement that they're moving in a positive direction and have nothing but love and respect for each other.

Part of their statement read,

"We have lovingly chosen to separate as a couple. We fell deeply in love so many years ago and have had a magical journey together. Absolutely nothing has changed about how much we love one another, but love is a beautiful adventure that is taking us on different paths for now."

Like it did when they first announced their separation, it sounds like Dewan and Tatum are both trying to live fulfilling lives and make sure they're happy in the process. Who can blame them? As they long as Tatum and Dewan are all good, that's all that matters.