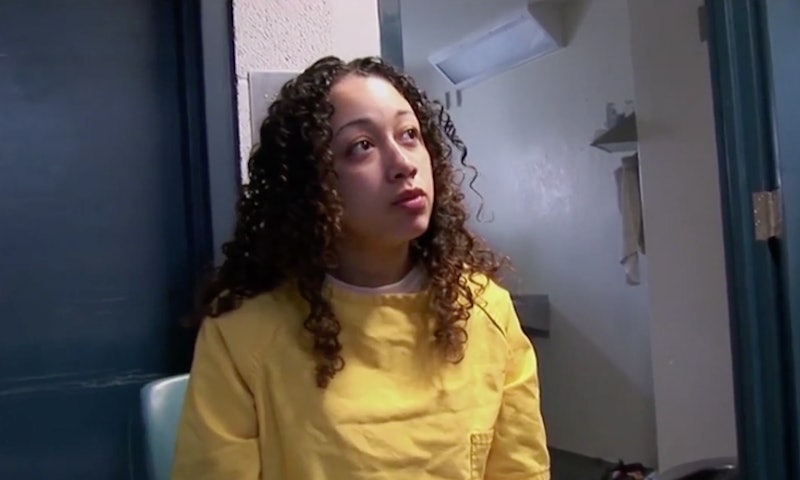 A sex trafficked teen kills her rapist and then ends up tried as an adult, sentenced to life in prison. This is one woman's story — and this one meme about Cyntoia Brown's struggle cuts straight to the core of everything that's wrong with the way that the justice system works.

In the meme, Cyntoia Brown is pictured next to Brock Turner, the former Stanford University swimmer who was charged with three counts of sexual assault and then sentenced to six months in jail — of which he only served three. Turner attempted to rape an unconscious woman, an experience that the world heard about when the victim released the statement that she read to Turner at his sentencing.

The judge, believing that a longer prison time would have "a severe impact" on Turner, gave him only six months out of the possible 14 years that he could have faced, based on his crimes. When Turner was released after only three months, all of the discussions of rape culture and white privilege that the case had originally provoked were reignited.

The meme, then, asks us to compare the two people's fates. Turner attempted to rape a woman and served three months of a six-month sentence. According to her testimony, Brown was raped repeatedly by people who paid to use her for sex when she was only a child. At 16, she killed a 43 year-old man who had paid to have sex with her. For this crime — killing the man who was essentially her rapist — she was sentenced to life in prison, only to be eligible for parole after 51 years behind bars.

Although there are vast differences between the two cases, the comparison is still crystal clear. Brown did kill a man, but she killed a man who had paid to have sex with an underage girl. And even though she committed the crime when she was still legally a child, the justice system treated her as an adult — and hit her with the full force of the law, charging her with murder and prostitution and handing her a life sentence.

Turner's case, on the other hand, shows a complete opposite reaction from the justice system. Turner was an adult when he was convicted of assault with an attempt to rape and sexually penetrating an intoxicated and unconscious person, crimes for which the state statute requires at least two years in prison. But the judge in his case, Aaron Persky, decided that Turner represented an exceptional case, and that he was less "morally culpable" because he had been drinking at the time of he incident. In other words, the judge felt sympathy for the young, promising athlete charged with a crime — an altogether common occurrence. And Turner benefitted from that.

In the eyes of the justice system, though, 16 year-old Cyntoia Brown was fully morally culpable for killing the man who paid money to have sex with a 16 year-old trafficking victim. Brown's heartbreakingly difficult childhood — an alcoholic birth mother, an adopted family she ran away from, life as a teen with a pimp named "Kut Throat" who raped and abused her while forcing her into the life of a prostitute — didn't earn her the sympathy that Turner received.

Brown didn't have a loving father to write a note of support for her, as Turner's father did. She didn't have a judge deem that hers was an exceptional case, and then cut her sentence down to a fraction of what it was supposed to be. And now she's still in jail, 13 years later — and Turner has already been walking free for over a year.

In short, these two cases represent two ends of the spectrum on how our society deals with sexual abuse. You'd think it would be clear who was the victim and who was the perpetrator — but the justice system doesn't always see it that way.