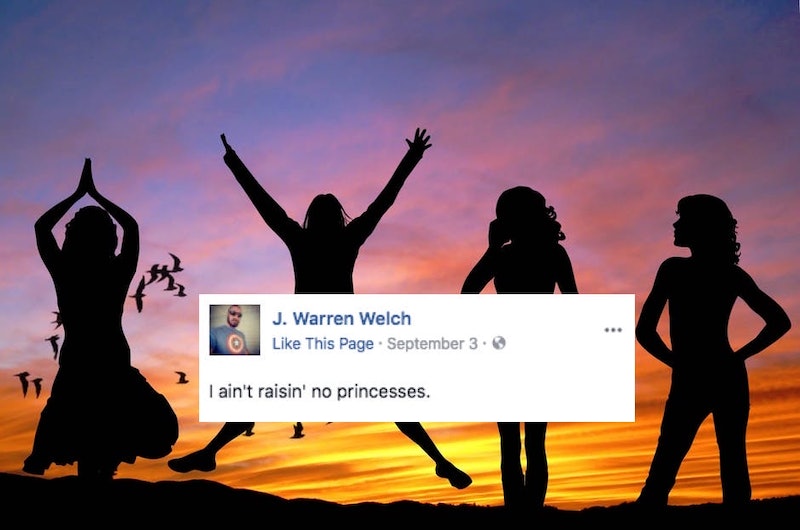 Writer J. Warren Welch, who is raising five daughters, posted a set of his own rules on Facebook and Instagram that have since been shared over 17,000 times. They are a welcome departure from the shotgun-slinging threats shrouded in toxic masculinity that are typical of these kinds of fatherly lists. Here are the rules by which any potential suitors must abide, should they choose to date Welch’s daughters:

“You'll have to ask them what their rules are. I'm not raising my little girls to be the kind of women who need their daddy to act like a creepy, possessive badass in order for them to be treated with respect. You will respect them, and if you don't, I promise they won't need my help putting you back in your place. Good luck pumpkin.”

See? Surprisingly not infuriating. I’ll admit I’m not a huge fan of the accompanying Facebook caption, which reads, “I ain't raisin' no princesses.” The notion that femininity and strength must exists separately or that stereotypically feminine things are “bad” arguably isn’t the end-all solution for sexism. However, Welch’s intentions are in the right place and far more feminist than most other “rules for dating my daughter” that have come before it.

“I understand the urge to protect your daughters,” Welch told Today. “I get that. But the kind of posturing by fathers of daughters I was specifically responding to had nothing to do with that 'protective instinct' and everything to do with asserting their dominance over women and reinforcing a belief that women need men to take care of them.”

Like Welch said, there is nothing inherently wrong with parents being protective of their children. Were parenting to have a job description, “protecting your kids” would be required skill number one. The problem with these stereotypic “rules for dating my daughter” often lies specifically in the sexist behaviors and misogynistic mentalities celebrated in father-daughter relationships. It’s a problem far less pervasive — if it exists at all — in the celebrated relationships between mothers and daughters, or more notably, fathers and sons.

Young daughters are hypersexualized while adult daughters are infantilized. Daughters of all ages are consistently used as a prop for machismo. Their protection, an excuse for everything from perpetuating these sexist household “rules” to actual transphobic legislation. Recent studies have shown that men get less sexist when they have daughters. However, that is only in regards to promoting gender equality in the workplace. While that’s encouraging, it also reinforces the notion that women and girls are solely defined by their relationship to men. It plays into the idea that women and girls should be protected, not because they’re human people who deserve to feel safe when existing in the world, but because they can’t do it themselves.

It’s admittedly frustrating that a father saying his daughters are autonomous over their own bodies and choices is such an anomaly it’s worth celebrating. Perhaps someday the absence of sexism will be less surprising than expected. Perhaps someday it will not take a male voice in order for conversations on equality to be heard.