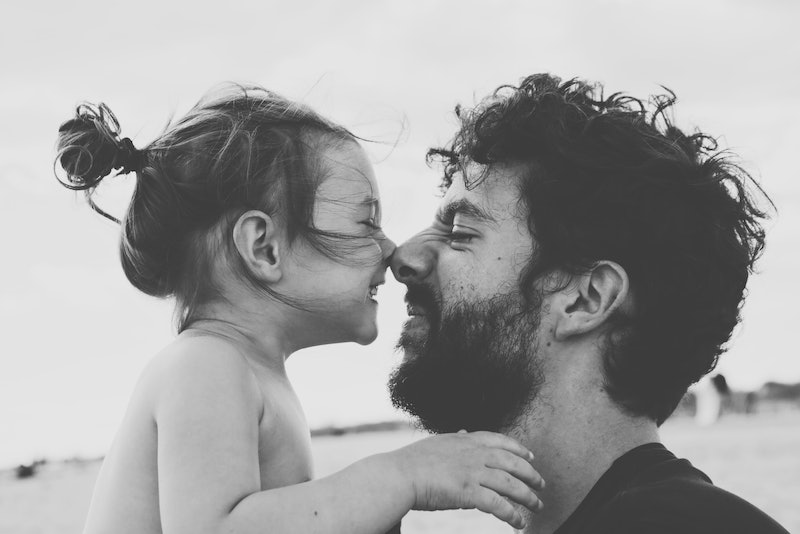 There’s a study currently making the rounds online. In someways, it’s a useful study; according to its results, men get less sexist when they have daughters, at least as far as promoting gender equality in the workplace goes. Generally speaking, things that make people less sexist are usually labeled as “good.” But I have complicated feelings about this study, because men shouldn’t need to have daughters in order to want to promote gender equality in the workplace. It’s yet another reminder that our culture so frequently values women only insofar as they have relationships to men (and tends to erase genders that aren't on the binary entirely) — and it’s a reminder of how very far we still have to go.

In a working paper published at the National Bureau of Economics’ website, Harvard University researchers Paul Gompers (a professor at Harvard Business School) and Sophie Wang (a PhD candidate studying economics) compiled a list of venture capital firms and startups that were backed by venture capitalists going as far back as 1990. (Yes, “as far back as 1990” — because 1990 was almost 30 years ago now, and none of us are getting any younger.) Gompers and Wang then sent the firms on the list surveys asking about the genders of their senior partners’ children. Gompers and Wang got about 1,400 responses back — and from this data set, they found that there is, in fact, a “daughter effect”: Having a daughter correlated with a 24 percent increase in the likelihood of a senior partner hiring a woman investor. Oh, and the "daughter effect" firms were more profitable, too — they had a three percent leg up in terms of the returns on their investments.

So, not only did dads who had daughters seem to exercise more gender equality in their hiring decisions than those who did not, but moreover, they apparently made better business decisions, too. What’s more, as HuffPo points out, this isn’t the first study to have turned up these sorts of results: Judges with daughters were found to rule more frequently in favor of women’s rights, according to a 2014 study; an earlier study published in 2006 found that Members of Congress voted more often in favor of women’s rights when they have daughters; and a 2015 study found that CEOs with daughters run more socially responsible firms.

All of that sounds like a good thing, right? Anything that makes people less sexist (or less racist, or less homophobic, or less transphobic, or less bigoted in any other way, shape, or form) is a good thing… right? Well, yes… but also no. It has to do with ends and means: The end result is a worthy one, but in this case, the means of getting there is — and always has been — problematic.

It’s a point that’s been made many, many times and by many, many people: What studies like this demonstrate is that (presumably cisgender and probably heterosexual) men seem so often only to care about or understand sexism when it affects women who are closely connected to them on a personal level — their daughters, wives, sisters, mothers, and so on and so forth. It is apparently too much to ask that men care about or make an effort to understand it insofar as it affects women as human beings — y’know, in general.

These infuriating events that occur involving people close to you? They do not occur in a vacuum. They are likely not isolated incidents. And they don’t matter solely because they are people you know.

As Anne Theriault wrote at Thought Catalog in 2013 in response to the Steubenville rape:

The Steubenville rape victim was certainly someone’s daughter. She may have been someone’s sister. Someday she might even be someone’s wife. But these are not the reasons why raping her was wrong. This rape, and any rape, was wrong because women are people. Women are people,rape is wrong, and no one should ever be raped. End of story.

As Sarah Todd wrote at Quartz in 2016 in response to Donald Trump's Access Hollywood tape:

Many [male leaders] have suggested that they find Trump’s behavior indefensible because of their own status as husbands and fathers. Such language implies that women are worthy of respect primarily because they are members of men’s families — not because they are human beings who deserve to move through the world safely.

As Via Aqsa Sajjad wrote at Elephant Journal in 2016 about the prevalence of rape culture:

My existence, my rights and my integrity do not need to be justified by someone else’s relation to me.

I am someone, not someone’s.

While it’s nice to know that having daughters can have a positive effect on men in the workplace, the bottom line is that it shouldn’t take having daughters to convince men that helping to end gender inequality in the workplace is a worthy goal — or to convince them that helping to end gender inequality more broadly is a worthy goal, either.

At what point are we allowed to stop being worthy of care and respect solely because we are someone’s daughter, wife, sister, or mother? At what point do we begin to matter simply because we are people? To my mind, we should passed that point long ago — and yet, we haven’t. Nor do I know when we truly will.

But what I do know is this: I have to believe that we will get there. Because that belief is what will keep us fighting — until we finally reach it.