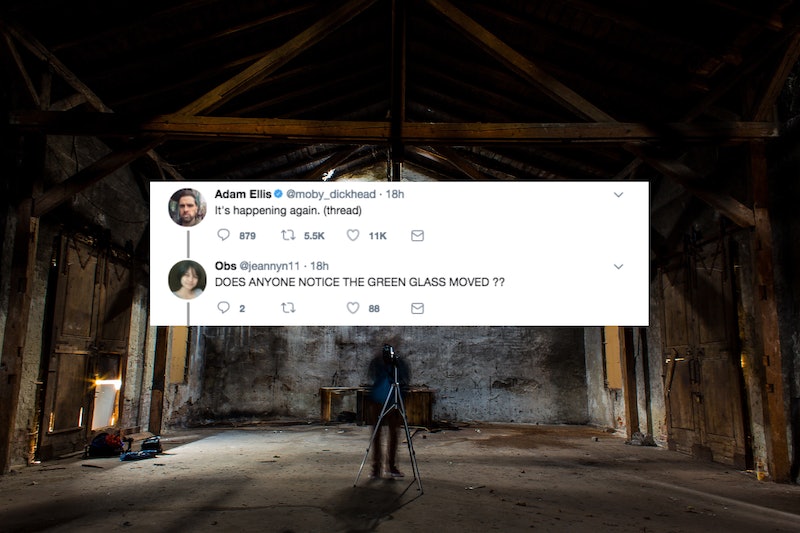 If you’ve been waiting for baited breath for a new update in the Dear David ghost story unfolding on Twitter, I have good news for you — although it’s probably bad news for Adam Ellis: On Tuesday night, Ellis began a new chapter in the saga with a tweet that just read, “It’s happening again. (thread),” and it’s the most unsettling update yet. It involves that pet cam he bought at the end of August, and, well… buckle up — it’s going to be a bump ride.

Ellis reported that lately, he’s been leaving the pet cam on 24 hours a day, seven days a week. As he previously established, it pings his phone and starts recording whenever it tracks sound or movement near the device. The last time we checked in, the camera had recorded two objects in his apartment seeming to move on their own: The green rocking chair, which Ellis had moved out of his bedroom, rocking back and forth, and a turtle shell falling off the wall where it had been hanging. When going over the footage for this past weekend, he found more strangeness — and this time, a lot of it came from one of his cats, Maxwell.

First, on Saturday night, the camera captured this:

Which, Ellis notes, is unusual behavior for Maxwell. “I don’t think it was a bug or anything,” he tweeted. “Maxwell doesn’t react like that with bugs. He just eats them.” (Hey, my cats do that, too!) Continued Ellis, “Something spooked him.”

Then, on Sunday night, the petcam recorded Maxwell doing this repeatedly:

Just, like... standing on his hind legs on the couch. For hours. Said Ellis:

Finally, also on Sunday night, the camera captured this moment:

Maxwell appears to be swiping at something or someone — and yet, nothing appears to be there. Ellis still doesn’t think it was a bug, either; according to one tweet, he can basically count the number of bugs he’s seen in his apartment during the years he’s been living there on one hand.

All of that is weird enough on its one, but it gets even freakier if you return to that very first video in the sequence from Saturday night. Maxwell’s jump occurs at the 10-second mark,but that’s not the only odd thing in that piece of footage; watch it again, and pay attention to the jar on the coffee table at around the 16-second mark.

Did you see it?

There are a couple of things to note about the jar. First, it’s true that the jar moving might be incidental for the reason pointed out by this Twitter user:

The source linked to in that tweet explains why drinking glasses sometimes slide across the counter seemingly of their own accord when they’re wet. Here’s the relevant paragraph:

When a wet glass is placed on a smooth, wet surface, a ring of water first makes a seal around the bottom edge of the glass. Then, as the glass continues toward the counter top, air that is under the glass bottom is compressed. Under ideal conditions, this small volume of pressurized air is able to support the weight of the glass. The water around the bottom edge of the glass functions as a seal to prevent the air from escaping. For a short time, the glass is floating on the surface water, and moves with almost no friction. A different, but related behavior is possible with a container that has a very smooth, flat bottom. Here, the water can not escape quickly, and temporarily supports the glass on a squeeze film of water alone.

As other followers have said, however, even if that is why the jar moved, the moment does seem rather convenient; what are the odds of it doing that right after Maxwell’s freak-out? I believe in coincidences, but something about this whole thing feels just a little too pat for it to be one.

Interestingly, too, the jar is green; given that the turtle shell that fell from the wall in one of the earlier pet cam videos was green, as was the rocking chair in which Dear David first appeared, this seems notable.

This could also be a coincidence (anda believable one at that); maybe Ellis just has a lot of green things in his apartment. Still, though — if we are looking at a real, honest-to-goodness haunting, maybe it indicates that the entity has an affinity for the color green.

I should probably note at this point that although I have been taking the tack of looking for reasonable explanations for all of the weird things Ellis has been reporting before I entertain the possibility that it might be an actual ghost, this latest update has entered some new territory: Yes, I can come up with explanations for the footage that aren’t ghostly in nature, but they all require so much work in order to execute that they can only be the result of a premeditated instance of extremely creative storytelling. I’m talking rigged items, cat baiting, the whole nine yards.

The upshot is that, while previously, I’ve thought things like, “Well, that’s kind of weird, but it might be pareidolia,” or “Yes, that’s unsettling, but it could be user error” — that is, I’ve thought it likely that there are explanations that support the idea of the whole not necessarily being a haunting, but also not necessarily being a hoax — now, I’m pretty much only left with two options: It’s a well-planned hoax, or it’s an actual ghost.

And honestly, I am not at all sure which theory is correct.

So, that’s where we’re at right now. Clearly we haven’t seen the last of Dear David, so you can keep following along at Adam Ellis’ Twitter account, or via his Storify documenting his experiences.

Anybody else think it might be time to call the Ghostbusters? Or maybe Father Merrin? Or the Winchesters? Heck, may as well go for the trifecta and call all three. Now if only they were real people…

More like this
Ashamed Of Your Screen Time Stats? Here's How To Change That
By Alexis Morillo
Learning To Love, Not Judge, The Lunchbox Wives Of TikTok
By Esther Zuckerman
11 Super Bowl Instagram Captions To Use On Game Day — Even If You Don’t Like Sports
By Alexis Morillo
Pret & Costa’s Coffee Is The Strongest On The High Street, According To Which?
By Sam Ramsden
Get Even More From Bustle — Sign Up For The Newsletter
From hair trends to relationship advice, our daily newsletter has everything you need to sound like a person who’s on TikTok, even if you aren’t.