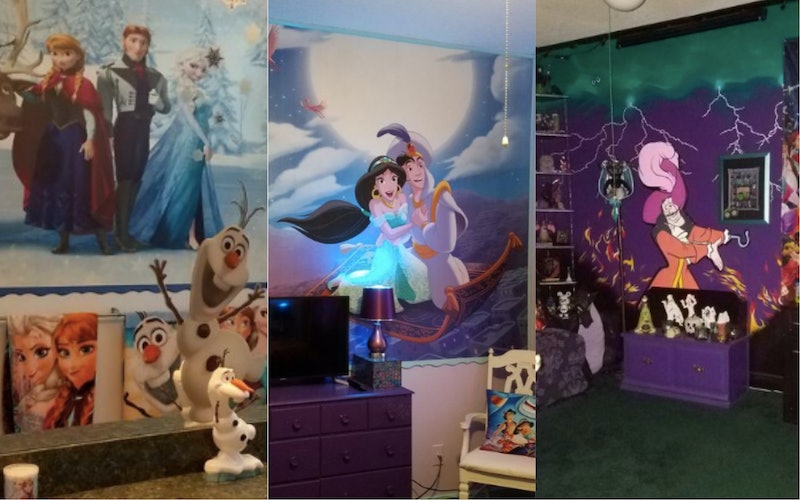 If you are both a Disney lover and in the market for a new house, boy, have I got the listing for you: A house being referred as a “Disney dream house” is on the market in Florida — and when you take a peek, you’ll see why the real estate listings for it have gone viral. It’s for sale by the owners, according to both Zillow and Trulia; it’s been on the market for a little over a month, but it’s making big waves on the internet now.

Located at 5306 Nagami Drive in Windermere, Fla., the house was built in 2005 as part of the Summerport subdivision. It’s mere miles away from Walt Disney World — Google Maps estimates 8.7 miles from the house to the Ticket and Transportation Center, which is about a 20-minute drive, but the trip simply to the edge of Disney property is a bit shorter than that. Either way, though, the proximity of the house to Disney World means that not only is visiting the parks relatively easily accomplished, but moreover, that you can watch Disney’s fireworks every day of the week — right from the comfort of your own home. The listing notes that there is a “spectacular Magical Fireworks view nightly,” while the neighbors told Orlando News 6 that “the seven-bedroom house gets a view of the Magic Kingdom’s fireworks every night over the lake.”

For the curious, here’s that view:

Also, yes: The house has a whopping seven bedrooms, two of which are master suites. There are also four full bathrooms, two half-baths, a breakfast nook, a dining room, a family room, a laundry room, an “extra large game room,” a three-and-a-half-car garage with a workshop attached, an attic, and a whoooole lot more. According to the Zillow listing, there are 20 rooms total in the house — which, as a one-bedroom apartment dweller who, at most, will be considering a house with two to three bedrooms, a kitchen, a living room, and a bathroom when I get to the property-buying phase, is… a little difficult for me to process. Mostly I can’t fathom how anyone could possibly afford that amount of space.

Then again, I live in an area with an extremely expensive housing market. Windermere actually looks like it’s pretty affordable in the grand scheme of things; the asking price 5306 Nagami Drive is $888,000, whereas if it were located in an area like mine, it would likely be a multi-million-dollar home. To be fair, $888,000 still isn’t cheap — but, I mean, hey! That’s pretty rad! Maybe I should move to Florida!

In any event, though, it’s clear that this house is a labor of love; nearly every single room is themed, from the Aladdin bedroom:

To the Goofy family room:

To the villainous… office? I think it’s office; it’s got a desk, after all:

And to the… uh… Christmas room?:

This must be like the homeowner equivalent of a Christmas Tree Shop: The one room in the house where it is All Christmas, All The Time.

I also dig the game room, although I’m not sure there’s necessarily a specific theme beyond general Disneyana:

Nothing, however, is quite as spectacular to me as the bathrooms. Among them are a Frozen bathroom:

A Little Mermaid one with a lovely-looking garden tub:

And — my personal favorite — a Tinkerbell half-bath:

Is it a little unsettling to have Tinkerbell staring down at you from the ceiling as you take care of business? Maybe… but it’s also amazing.

It’s unclear whether the house is being sold furnished; even if it’s not, though, there’s still plenty of Disney-specific décor that would remain even after the furniture went.

The sellers are well-liked within the neighborhood; said neighbor Nancy Murphy to Orlando News 6, “I don’t want them to leave, I really don’t. Best neighbors you could ever ask for. They love children.” Added Sean Coamey, “When people ask where I live, the landmark is, Well, you know the Disney house? Well, I live across the street.”

One would hope that whoever does end up buying it will take good care of it; it’s not every day you find a place like this. It’s also true, of course, that this place isn’t for everyone — but there’s got to be someone for which it’s right.

Take a look at the Zillow listing, which includes many, many more photos, here. Also, let me know if you make an offer. If the house becomes yours, can I come visit?