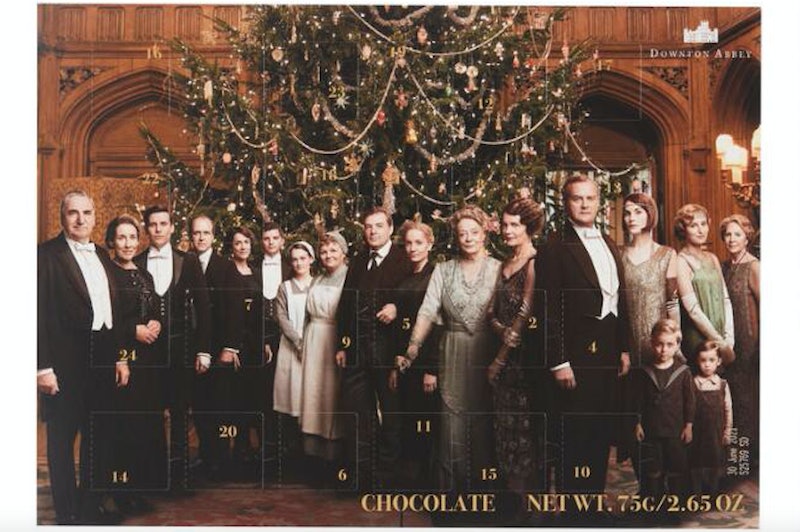 Not ready to start thinking about the winter holidays yet? TOO BAD. We’re already knee-deep in this year’s crop of advent calendars, after all — and here’s one more to add to the list: You can get a Downton Abbey advent calendar at World Market right now. It is decorated with a photograph of both the Downstairs and Upstairs crews from the hit television show (and now movie). It is full of chocolate. And the best part is that it’s a mere $7. I’d call that a holiday win.

The Downton Abbey advent calendar that’s currently available on World Market’s website depicts the residents of the stately home posed, portrait-style, in front of an elaborate Christmas tree: The family is on the right, while the staff is on the left. Embedded within the photograph are 24 little doors covering the typical advent period — Dec. 1 through the 24 — each with a piece of German chocolate behind it. It’s a World Market exclusive, by the way, so that’s the only place you can get it — but, I mean, given the huge array of Downton Abbey-themed merch that’s also available at World Market, that’s perhaps to be expected. It’ll set you back just shy of $7 to buy, plus shipping. (Standard ground shipping at World Market starts at $4.95 for orders $15 and under; it usually takes about six to eight days for these orders to arrive at their destination.)

I do want to be upfront about the fact that this calendar is really only Downton Abbey-themed in that its main photograph is an image from the show; other than that, it’s not spectacularly theme-tastic or anything like that. (The chocolates inside, for example, probably aren’t Downton Abbey-specific.) But to be perfectly honest? That’s… y’know… fine. Advent calendar have been getting increasingly elaborate over the past few years — and increasingly expensive — but there’s something to be said for going back to the basics: A picture of characters you enjoy. 24 little doors. Tasty morsels of chocolate for each day leading up to Christmas (or whatever day to which you choose to count down). All at a hecka affordable price? Yes, please.

Downton Abbey originally began airing in 2010 in the UK and 2011 in the United States. It immediately became first a hit, then a full-blown phenomenon — so, naturally, there have been a number of merchandise tie-ins released over the years, allowing adoring fans to fill their homes with the same sorts of tidbits we like to image exist within the walls of Downton itself. From wine and jam to tea services and other homegoods, many of these items are still available now; what’s more, the recent release of the Downton Abbey film has led to an outpouring of even more themed items to choose from. (Hi there, Downton Abbey cupcakes from beloved New York bakery Magnolia.)

While it’s perhaps true that the Downton star doesn’t burn quite as brightly these days as it did when the show was at its height, it continues to enthrall; the film, for example, was described as “a supersized episode of [the show] that is enjoyable and substantial enough to justify its existence” by Vulture — which, the review points out, isn’t an “insult,” but rather the “ideal case scenario.” Although the show has continually dealt with very real and often topical issues, the fact remains that for many, it’s a form of a escapism — and that, like the back-to-basics advent calendar bearing its name that’s now available, is perfectly fine.

Pick up your own advent calendar here. Now if you’ll excuse me, I’m going to go put the kettle on. It’s almost tea time!