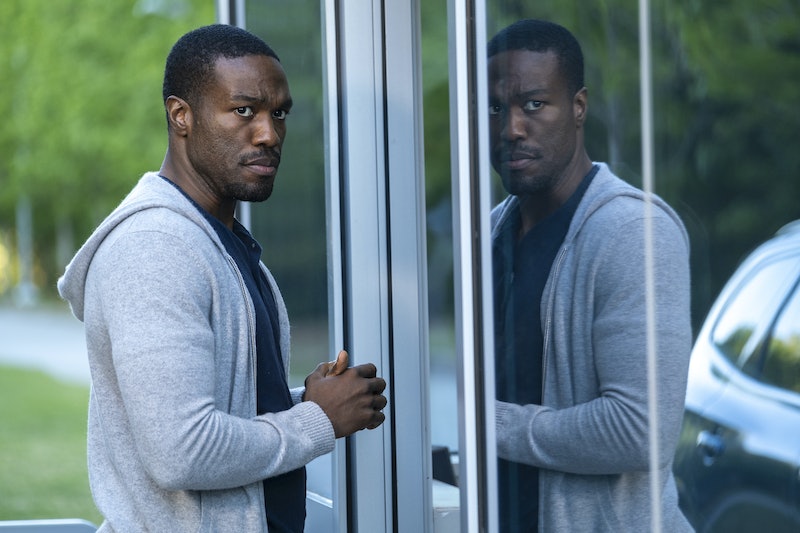 Spoilers ahead for Watchmen. For most of the season, Doctor Manhattan, the only true superhero in the Watchmen world, was believed to have permanently left Earth for Mars. But, as was revealed in Sunday night's episode, it turns out that Doctor Manhattan was hiding in Cal all along, as his wife Angela brutally revealed when she smashed his skull in. The revelation was a shock to most fans, but there was actually a major Watchmen Doctor Manhattan Easter Egg early in the season that hinted as to his true identity — and we all missed it.

Excalibur is the name of King Arthur's legendary sword and it's befitting considering the size of Doctor Manhattan's legendary penis (in the comics, he often strode around naked). But more importantly: Doctor Manhattan is Laurie's ex, and now fans know he's also Angela's husband, whose name is Cal Abar. When you combine the words, you get "Ex-Cal-Abar."

Before the reveal, some fans on Reddit had guessed that Cal could be Doctor Manhattan. User mary_pooppins noted out how Cal had said that Doctor Manhattan can't pretend to be human and that when Laurie spoke about Cal, she often would then mention her blue ex. Meanwhile, user ksendor had noticed Doctor Manhattan's hands in a Watchmen trailer and thought they were similar to Abdul-Mateen's hands. IGN also pointed out that Cal is the same name as Superman's name on his home planet of Krypton and Doctor Manhattan is referred to as the "world's first Superman" in Watchmen.

The next episode promises to show how this superhero ended up meeting and falling in love with Angela, a Vietnamese police officer. But another Peteypedia file gives insight into how they managed to hide Doctor Manhattan's being inside of Cal. According to medical records, a Calvin Jelani was brought into the hospital by Officer Abar with memory loss after an accident, hinting that Doctor Manhattan has been living as a human since then.

The documents also reveal that Cal may have had a connection with Ozymandias since he worked for Pyramid Global Construction — a name similar to a company Adrian Veidt had in the Watchmen comics. So perhaps Veidt had a hand in developing the technology that allowed Doctor Manhattan to live as a human. But no matter how they made it happen, it seems the time for hiding in plain sight are over. It's time for Doctor Manhattan to come out.