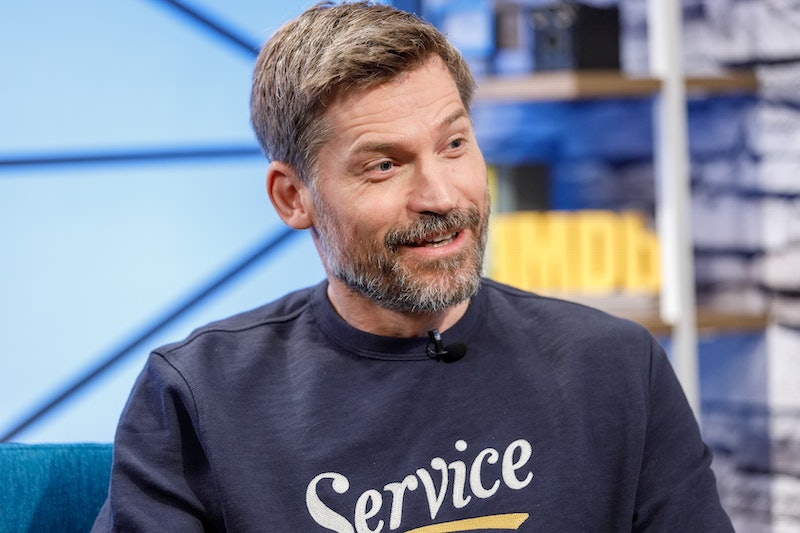 There's only a few days left until the final season of Game of Thrones begins, which means that the cast only has to try and keep the final plot twists a secret for a little while longer. In the meantime, at least, star Nikolaj Coster-Waldau commented on the Game of Thrones theory that Jaime will kill his sister, Cersei, and the actor's reaction might just have dropped an important hint about what to expect.

During a recent appearance on Jimmy Kimmel Live! the actor was quizzed about popular fan theories floating around the Internet about the final season of Thrones. "I’m a terrible liar," Coster-Waldau admitted, before host Jimmy Kimmel presented him with some predictions, "So this might be it." Still, when he was asked his thoughts on the theory that Jaime kills Cersei (Lena Headey) at the end of the series, he didn't exactly laugh it off. "That's a theory," he said, matter-of-factly, before adding that, "it makes sense though, if you think about it."

As for the theory that Arya (Maisie Williams) — who has learned the ability to disguise herself from the Faceless Man — will use Jaime's face to kill Cersei, Coster-Waldau noted that twist "would be cool." In other words: Cersei should watch her back around her twin brother in Season 8.

According to Nerdist, the idea of Jaime killing his twin sister comes from the book series, where Cersei was foretold that she will be murdered by by "the valonqar," which is high Valyrian for "little brother." Though she thought that this meant that Tyrion (Peter Dinklage) would be her demise, Jaime was born second, which technically makes him her younger brother as well. Furthermore, as the outlet pointed out, Jaime has killed a king before — he murdered Aerys Targaryen, the "Mad King" before the series began, allowing Cersei's late husband Robert Baratheon, to take the Iron Throne — so taking down the current Queen shouldn't be too much of a stretch for him.

While Coster-Waldau didn't technically reveal any spoilers about the final season of Game of Thrones during his visit to Jimmy Kimmel, he did share how the show's creators managed to keep a tight lid on everything that happens in the last six episodes. "We had to download an app — because now, of course, you can't get paper anymore — so we got an app, and the scripts came, and when you finished them, they'd magically disappear," the actor explained to Kimmel about how he discovered the show's ending.

And he wasn't a fan of the new, heightened security: "I dislike it, yeah. I like to make notes and stuff [in my script]," Coster-Waldau explained, before adding, "I have all of the other scripts, all the other seasons, and we don't have Season 8. It's a little sad."

Coster-Waldau has previously dropped a few important hints about what will happen to Jaime in Season 8, including a recent interview with Star2.com, in which the actor revealed a few key details about his final scene. "I had a great last scene. It was absolutely beautiful. It was the perfect way to end," Coster-Waldau said, adding that "it wasn’t the final scene [of the series], but it was close to the end and it was shot at a beautiful location."

In August, he also seemed to hint that Jaime would be reunited with Brienne of Tarth in the show's final episodes, telling the Huffington Post, "Well, he is heading north. I don’t think you can assume that he’s going to make it up there, but who knows." He continued, "For sure, we see him head north. He might be eaten by dragons, you never know. Or he might just stumble, things happen. Or he might find the love of his life and suddenly he’s like, 'God, this is it. No more.'"

Coster-Waldau might not have been able to properly confirm what happens to Jaime in the final episodes of Game of Thrones, it seems like fans can continue to expect that the Kingslayer will bring plenty of heartbreak and bloodshed with him, everywhere he goes.