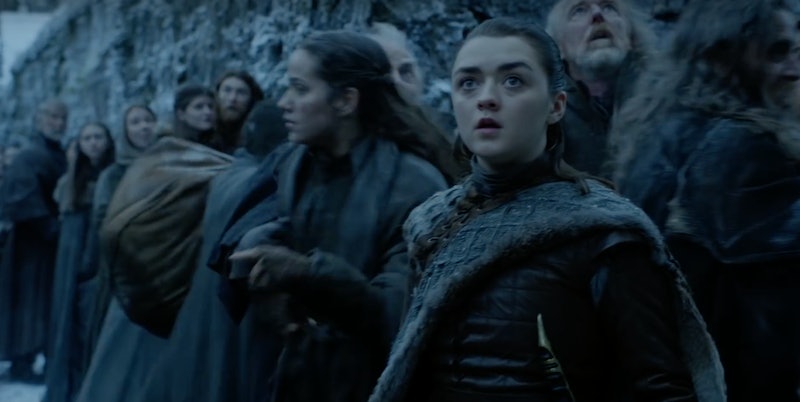 Move aside, winter, because another season is coming. That season is the eighth season of Game of Thrones, so ready yourself for twists and turns and face swaps. After HBO released the official Season 8 trailer on Tuesday, a popular Game of Thrones theory about Arya Stark, Cersei Lannister, and Jaime Lannister bubbled up on Twitter again. Some fans think the trailer might've dropped some big hints that support the theory that Arya will kill Cersei while she's wearing Jaime's face, so get your magnifying glass out and put your speculating hat on.

At the beginning of the clip, we see Arya running around with blood on her face and hear her talking about death’s faces— you know, classic Arya Stark stuff. “I know death,” Eddard Stark’s youngest daughter tells someone. “He’s got many faces. I look forward to seeing this one.” Given the Extreme Revenge Vibes of this speech, it feels safe to say Arya is probably speaking about someone on her kill list.

Many fans suspect that someone is Cersei. Cersei has been on Arya's list ever since she played a major role in Ned Stark's beheading, and if Arya gets her way, we could see a face-off between her and Cersei. (Why yes, as a matter of fact, that pun was quite intended.)

For the last few years, there’s been a theory that Arya will apply what she learned during her time with the Faceless Men, put on Cersei’s twin brother’s face, and then kill the Queen of the Seven Kingdoms.

The fifth season began with a flashback in which Cersei meets with a fortunate teller named Maggy the Frog. Maggy tells Cersei she will be queen, will marry the king, bear three children, and then will be overthrown. But as fans of the book series have noted, the show cut the part of the speech where the soothsayer tells Cersei her younger brother will kill her one day.

In A Feast for the Crows, Maggy also says, "And when your tears have drowned you, the valonqar shall wrap his hands about your pale white throat and choke the life from you." Valonqar means “little brother” High Valyrian, and Cersei took this to mean she would be killed by one of her two younger brothers. Given her close relationship to Jaime, she assumed Tyrion would be the culprit.

Again, the stuff about the valonqar and the hands and the throat did not make it into the TV version of Maggy the Frog’s prophecy, so maybe the valonqar won't kill her on the show after all.

However, if Arya were to vanquish Cersei while wearing Jaime’s face, one could say that the valonqar prediction from the book series came true in the TV show’s universe. It's a morbid loophole, but it's still a loophole.

Sigh, if only we all had Maggy the Frog's soothsaying skills.