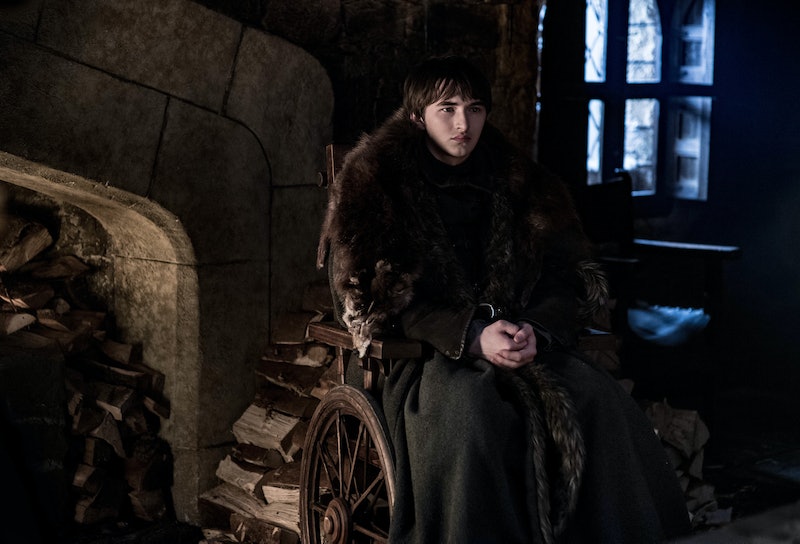 With the finale fast approaching, there's not much time left for the many, many Game of Thrones fan theories to come true. Still, a new theory about the possibility that Bran is the evil puppet master of Westeros is so compelling it can't be ignored. The idea is that Bran has been manipulating the characters for his own gain all season, culminating in him warging into Drogon and torching King's Landing in "The Bells." Yes, it's wild, but this explanation would make the mysterious Three-Eyed Raven's nonchalant attitude over the past two seasons make a lot more sense.

Reddit user ratcliffeb's theory suggests that the Three-Eyed Raven's ultimate goal is to destroy all of humanity, not to save it, and that he's been shaping the history of Westeros through visits to the past. From the creation of the Night King to King Aerys going mad, Bran's supposedly been the engineer behind every twist and turn in the history of the Seven Kingdoms, including Daenerys' recent rampage through King's Landing.

"Dany's eyes are LOCKED onto the Red Keep when she takes off and shes beelineing [sic] it for it for quite awhile. It's only after we see the identical scene of Bran's vision from an earlier season of Drogon's shadow flying over King's Landing that Drogon changes directions and starts lighting everyone up. They don't show a close up of Dany again after that."

The idea is that Daenerys loses control of Drogon, because Bran is controlling her dragon's actions. That would mean her original intent was to go directly to the Red Keep to deal with Cersei rather than to burn countless innocents. But it's unlikely that anyone would believe her story, which could lead to her death and even more chaos in the Seven Kingdoms; chaos which the Three-Eyed Raven in his current iteration would delight in.

Part of the allure of this theory is that it would mean that Daenerys didn't actually go mad and kill countless people, but it also plays into a larger problem surrounding the character of Bran. Since he became the Three-Eyed Raven, he hasn't used his powers for any discernible good. Rather than warg into a dragon or a direwolf, or anything useful, he chooses to watch the Battle of Winterfell through the eyes of ravens. He says that he can see the past and maybe even a bit of the future, but he doesn't use his access to this wealth of information to help the other characters.

Aside from giving Arya the Valyrian steel dagger that ultimately kills the Night King, Bran has been a passive bystander refusing to do... well, anything, really. What's the point of having a character who has so much power not use any of it for the betterment of the world? Unless he's evil, which would at least make his actions (or lack thereof) understandable.

If Bran is evil, then removing the Night King (who was specifically targeting him) and Daenerys from play would give him a clear shot for the Iron Throne. Or, if he has no interest in the throne, then it could also continue the endless power struggle — keeping the wheel turning for the rest of all time.

That's a lot of motivation to unpack in a single episode, so it's more likely that the show will go with Daenerys being completely in control of her actions. But that doesn't change the fact that the Three-Eyed Raven's role as a dispassionate observer makes the character feel like a villain, whether that was the writers intention or not.