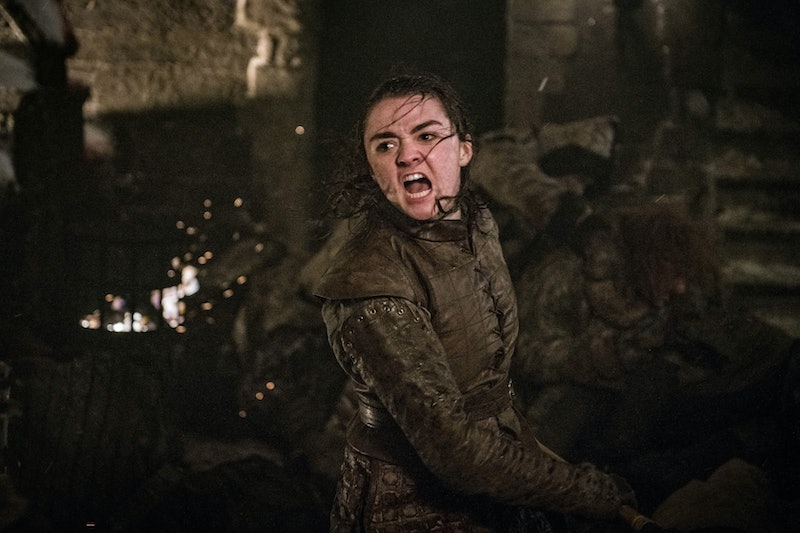 The final season may have been divisive, but this new Game of Thrones video of Maisie Williams rehearsing for the Battle of Winterfell is a reminder of just how technically impressive the show could be. Arya's take down of the Night King is one of Season 8's best moments, and it seems even the leader of the White Walkers was impressed by her moves. On Friday, July 26, stunt coordinator and Night King actor Vladimír Furdík reshared a video of Williams rehearsing for one of the action sequences in "The Long Night" that was first posted by his fellow stunt coordinator Rowley Irlam on Instagram — and yes, she totally nails every move.

In the video, Williams is wearing a puffy coat and yellow boots, but even though she's not in full fearsome Arya mode, she still wields her stick with confidence. The finished scene she was practicing for is included after the rehearsal, which gives viewers an idea of just how hard the actors and crew worked on the massive episode. Seeing the actor go from playfully rocking yellow boots to swinging Arya's special wights killing weapon with deadly intent is incredible. Additionally, the amount of work that went into crafting the choreography, as well as the trust that has to exist between the actors and the crew, is on full display.

"The Long Night" was a massive undertaking for all involved, but when the battle elements are stripped away it was first and foremost the culmination of Arya's hero's journey. This behind-the-scenes video shows just how hard Williams worked to nail the physical aspects of her performance. It seems even the stunt coordinators were wowed by the 22-year-old's commitment to getting the fight scenes right.

After "The Long Night" aired in April, Williams told Entertainment Weekly how she prepared for the intense 55 night shoot for the episode. Interestingly, the actor had never been in one of Game of Thrones big battle episodes before. She explained to EW, "I've never been in a battle before. Arya's never in it. Episode 9, I skip every year. Which is bizarre since Arya's the one that's been training the most. I've never been around that way of working."

She also shared that there was a physical toll to practicing for Arya's intense Battle of Winterfell moments that she had never dealt with before during her time working on the series. "I feel like I've always been part of this big show but in terms of being part of the episodes that really define us, this is my first taste of it," Williams told the magazine in April. "And I've been thrown in the deep end, as well … You try and you train but nothing can prepare you for how physically draining it is. It's night after night and again and again and it just doesn't stop."

All of that hard work paid off. Not only did "The Long Night" culminate in an amazing character moment for Arya when she landed the killing blow that ended the Night King, Williams is also competing for an Emmy in the Supporting Actress race this year for her killer performance.

Seeing Williams work so hard in the behind-the-scenes video is further proof that the young actor is just as amazing as Arya — which is something it seems even the Night King can appreciate.