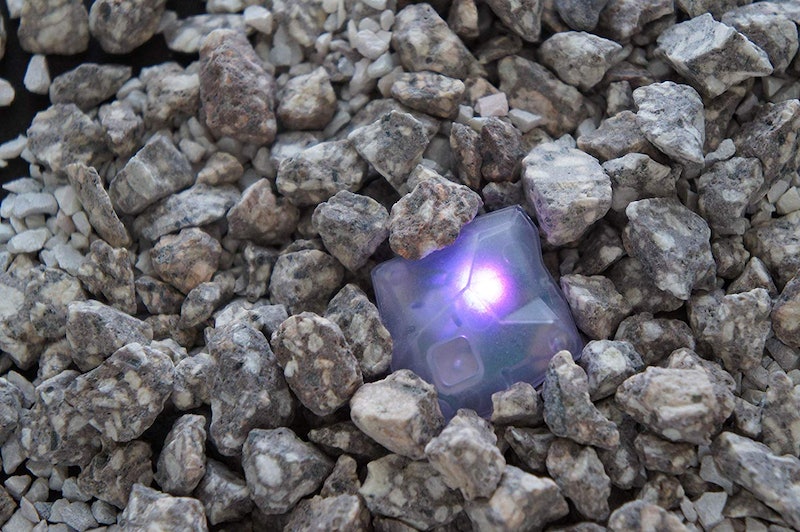 If you’re undertaking a paranormal investigation sometime in the near future, here’s something you might consider adding to your ghost hunter’s tool kit: This stone allegedly detects the presence of ghosts — and you can get it right on Amazon. Made by Japanese company SolidAlliance, the device, called Baketan Reiseki, purports to indicate via colorful lights whether there are any supernatural beings surrounding you at any given time. Whether or not it actually works remains to be seen — but regardless, it’s a fun little toy to look at as we move into the spookiest of seasons. (Raise your hand if you’re impossibly excited for fall!)

According to a press release for a recent edition of the Baketan Reiseki device published in February of 2019, SolidAlliance’s first ghost detector was introduced in Japan in 2005. It apparently became “a big hit in the sub-culture market” in the country, with “lots of ghost reports” being “sent to the company and media.” More than 200,000 of the devices were sold in Japan — and ever since then, SolidAlliance has periodically released new editions of their ghost detectors, including the little device we’re looking at today.

SoraNews24 reports that the name of the device is sort of an elaborate portmanteau: “Baketan” comes from “obake” (represented by the characters お化け), a type of yokai or monster, and “tan” (探), or “to search.” (Interestingly, though, despite the fact that “obake” is often translated into English as “ghost,” the word more specifically refers not to the spirits of the dead, but to supernatural creatures — who might, in fact, still be alive — capable of shapeshifting. Just, y’know, FYI.) “Reiseki,” meanwhile, comes from “rei” (霊), or “spirit,” and “seki: (石), or “stone.” So, all together, “Baketan Reiseki” translates roughly as “stone that searches for ghosts.”

And that, it seems, is exactly what the item purports to do: It claims to search for unusual paranormal activity and inform you about what’s going on around you based on a color-coded light system. The stone lights up green when there’s nothing usual around; it turns blue if there’s an “angel” present; and it turns red if there’s a “ghost” in the area. It also might glow blue-green or yellow, with the blue-green color existing between the green and blue lights on the spectrum of possible outcomes and the yellow one covering the space between green and red; however, it’s not totally clear what these two colors might mean.

The Baketan Reiseki also has three different modes in which it can operate. “Search mode,” which is activated by pressing a button on the device, functions as the stone’s manual mode. I you want to check an area in which you’re currently standing, press the button to activate this mode and hang tight for a few moments. First, the device will make a beeping sound while the light flashes a few times; then, the lights will eventually settle on a specific color indicating what’s going on (or not going on, as the case may be) where you’re located. “Automatic search mode,” meanwhile, scans the environment every 10 minutes and gives you a reading based on what it finds. “Barrier mode,” meanwhile, allegedly protects you from spirits, although it’s not totally clear how it does so. (It might be more of a passive mode than an active one.) To turn on barrier mode, press and hold the the button for five seconds.

But does it actually work? Well, that’s up for debate. If you want to see it in action, though, SoraNews24’s Seiji Nakazawa recently took a Baketan Reiseki stone on a tour of Chillingham Castle in Northumberland, UK — a name which might be familiar to you if you watched a lot of Scariest Places On Earth in the early 2000s — and, well… here’s what happened:

The video is in Japanese, but here’s a breakdown in English of what happened in each spot in the castle Nakazawa tried to use the stone. Weirdly, the most active it got wasn’t within the castle walls, or even on the castle grounds — it was right outside the castle gates.

The Baketan Reiseki claims to get its oomph from cracked quartz, according to its item listing. Quartz itself is incredibly common; indeed, it’s the “most abundant mineral on the Earth’s surface,” according to geoscience news and information site Geology.com. There are many different varieties of quartz, though, and for those who believe in the use of crystals for the purposes of healing or for their supernatural power, the choice of quartz you opt to use depends on what you hope to accomplish. Healing crystal website and retailer Energy Muse notes that quartz is both “versatile and multidimensional," functioning as “a stone of amplification, clarity, and focus”; cracked quartz, however, differs from standard quartz in that it contains many different cracks within the larger crystal. Energy Muse describes the cracks as “[representing] the life lessons, barriers, and obstacles,” while the uncracked portions of the stone represent “moments of evolution, growth, and clarity.”

It’s a little difficult to tell what other materials make up the Baketan Reiseki, but per its item details, it does run on batteries; the light is likely an LED bulb or something similar; and it looks like the casing for the whole thing might be plastic. From what I can see in the “how to change the device’s battery” video available on the SolidAlliance YouTube channel, the quartz is ring-shaped and wraps around the battery.

Which, of course, brings us to the price: The Baketan Reiseki is priced on Amazon at 3,024 yen or $28 USD. To be perfectly honest, I’m not totally sure this little gizmo is actually worth nearly $30; it seems a bit high for a device mostly made of plastic, batteries, and a little light bulb, even if there is some actual quartz inside the casing. But it is kind of fun all the same; it might make a good gift for the ghost enthusiasts in your life.

For the curious, SolidAlliance actually keeps an active livestream documenting the device’s activity; the livestream consists of a camera focused on six Baketan Reiseki stones hanging on a wall. You can find it here — and if you’re interested in seeing some highlights, a separate video pulls out 20 minutes of notable footage from the Aug. 15, 2019 livestream. Spooky, or underwhelming? You be the judge!