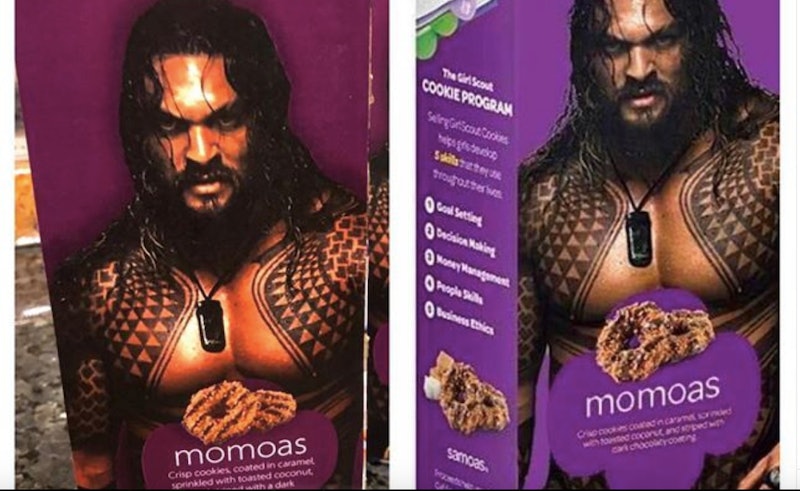 Take all of my money. Just take it — I'm done. The latest entrepeneur to watch is person is Charlotte Holmberg, and she is in fifth grade. This has not stopped her from earning the title of “Cookie CEO” after selling 2,000 boxes of Girl Scout Cookies last year. TWO THOUSAND. How did she take her sales to new heights? Well, with a very important twist. This girl went and put a hulking, broody, and shirtless Jason Momoa on the box of Girl Scout cookies — right on the box. That’s right, she turned her Samoas into Momoas.

As you can imagine, this led to a major increase in sales — a whole lot of attention. Holmberg’s mother was a big help in the processes, putting a photo of Mamoa onto the traditional purple packaging. Considering Samoas are already the best Girl Scout cookie (don’t @ me, I will fight you), it was a clear win.

The cookies were such a massive success that two local news anchors came down to speak to Holmberg and it drew the attention of the entire state. "Thank you Kim Christiansen and Kristen Aguirre of 9NEWS (KUSA) for supporting Girl Scout Charlotte and purchasing a package of Jason Momoa Samoas!" The Girl Scouts of Colorado wrote — which, in the Girl Scout game, I assume is the equivalent of winning a Nobel Prize for cookie sales.

Now that the 2019 Girl Scout cookies season is well underway — complete with a brand new cookie — it was only a matter of time before we started seeing some ingenious marketing plans, but Mamoas really take the cake. (Or cookie.) Of course, if you don’t know a Girl Scout or where to buy cookies, you can always try making your own Girl Scout cookies at home. If you do it while watching an episode of Game of Thrones, you can have your own little Mamoa moment.

Girl Scouts have been finding more and more creative ways to sell — like the girl who set up outside a marijuana dispensary last year (and sold all of her cookies within 45 minutes). Could it be that Girl Scouts are creating the next generation of entrepreneurs? It certainly seems that way. As someone whose friend only sold 15 boxes when we were kids (and that’s because I ate ten of them), I have to respect the hustle — and if you can get some shirtless Mamoa along with it, all the better.