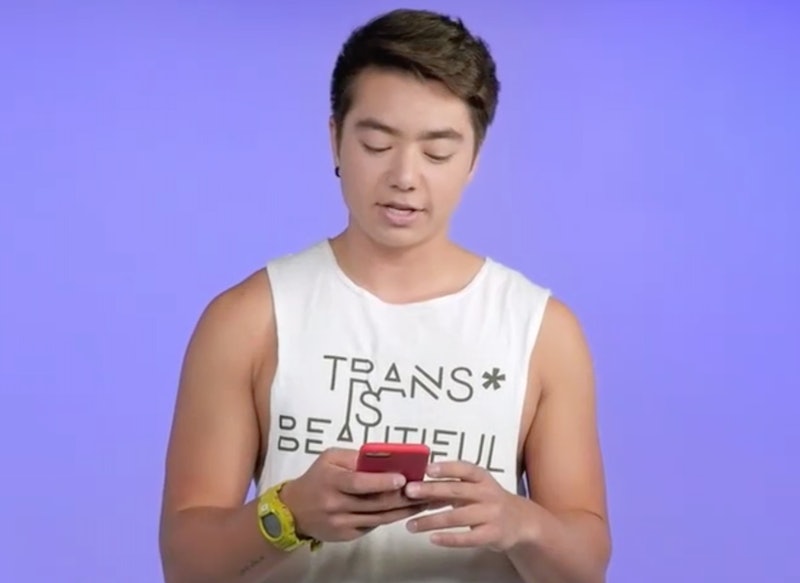 The abuse that trans people and other marginalized folks face online is truly appalling. But kind words directed toward them can be equally powerful, as a video created by GLAAD in which trans people read their nice Instagram comments reminds us. In addition to spreading awareness about discrimination, there's something to be said for spreading positivity — especially when that positivity highlights the important work trans activists do.

GLAAD, Instagram, and genderqueer writer-producer Jacob Tobia created the video for the Transgender Day of Visibility, which was observed on March 31. The final product, starring trans public figures and activists including YouTube star Gigi Gorgeous and TransTech founder Angelica Ross, first screened at GLAAD's Rising Stars Luncheon and was posted on GLAAD's Instagram page. "For me, this project was a love letter to the trans community," Tobia said in a blog post on GLAAD's website:

Trans people put a lot on the line by becoming visible leaders. Unfortunately, being trans and visible in America today means dealing with a lot of haters and a lot of probing questions about your identity and your past. On a day that's all about celebrating visibility, I wanted to be sure that the trans folks on the frontlines of visibility in the media were surrounded by love and positivity. Focusing on #KindComments, and hand-selecting beautiful comments from their fans was an easy way to do that. Also, I love Jimmy Kimmel's 'Mean Tweets' segments, and I wanted to make my own transfabulous version!

Videos in which people read unsupportive remarks, like this one of men reading mean tweets women sportscasters have received and this one of news reporters reading sexist comments, are a necessary illustration of the discrimination many groups face online. The fact that these people get some positive feedback shouldn't undermine this point. Nevertheless, amplifying people's kind words gives these words more power and helps drown out the haters.

Some of the GLAAD video's stars read comments by people their activism helped. "My son had his chest surgery five days ago. You're an inspiration," reads one comment directed toward swimmer Schuyler Bailar. "My husband's about to start hormones next month. So grateful to y'all for helping others to be their authentic selves," says another for Alexandra Grey. And Trace Lysette got this heartwarming comment: "You inspired me to come out publicly as trans a few days ago. Please keep pushing forward."

Others simply contained encouraging words. "Thank you for letting us see your journey. You're such a beautiful human," reads Gorgeous'. Ross' says "I'm so happy to be alive and to witness a shooting star so close to my heart." Activist Zoey Luna got, "Look at you being a badass LGBT teen!"

46 percent of trans and non-binary people in the U.S. have experienced verbal harassment, according to last year's National Center for Transgender Equality survey, so it's important that they hear encouraging messages to counteract this mistreatment. As these comments show, public figures like the ones in the video serve as role models for many other trans people, and seeing these people get support can teach others that there are people out there who support them, too.