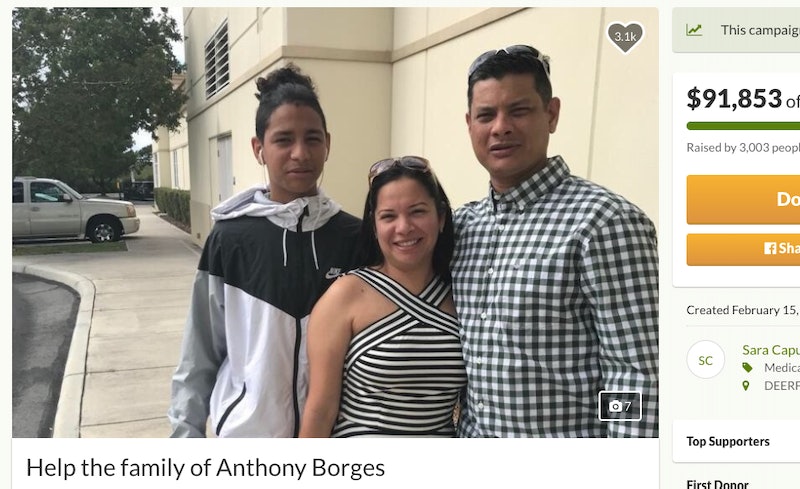 South Florida hospitals have confirmed that all of those injured in the Parkland, Florida, school shooting have been upgraded to fair condition. One of these victims is credited with saving as many as 20 of his fellow classmates. Florida shooting survivor Anthony Borges is being commended for his bravery, and everyone from the local sheriff to Black Lives Matter has honored him on Twitter.

Borges was in class when the shooting broke out, a friend who says he survived solely thanks to Borges told ABC News. Carlos Rodriguez told the network that Borges pushed the door shut, trying to lock it, even as bullets came flying from the other side.

"None of us knew what to do. So, [Anthony] took the initiative to just save his other classmates," Rodriguez told ABC's Good Morning America.

The student's father, Royer Borges, told ABC News that his son called him just after the shooting and detailed his injuries. Anthony, who is just 15, was shot multiple times. He was hit in both his legs and his back.

On Sunday, the Broward Sheriff's Office posted a photo of Borges to Twitter. "Fortunately, he is recovering, but has a long road ahead with more surgeries needed," the sheriff's office tweeted.

That photo has since been shared by a number of other groups and prominent people on Twitter, including Black Lives Matter, who tweets "Let's pray for his speedy recovery." Others posted a link to a GoFundMe campaign that was set up by a co-worker of Borges' dad. As of Monday morning it had raised more than $76,000.

"Help the family of Anthony Borges," the campaign is titled. "Our thoughts and prayers are with Anthony and his family," wrote Sara Caputo, the coworker who set up the fund. "Any help is very much appreciated."

Borges is one of the four remaining shooting victims currently in the hospital. The last individual in critical condition was upgraded to fair on Sunday, according to Broward Health North Hospital.

"This is an important milestone for this patient and our care team," said Igor Nichiporenko, medical director of trauma services, told The Sun-Sentinel.

That's the hospital where President Trump visited on Friday, taking photos with a "thumbs up" and drawing further controversy to his response to the shooting. Broward Health North Hospital initially received 17 injured people, two of whom died.

As Borges recovers in the hospital, other survivors have been taking to the national stage to demand progress on gun control to prevent a similar tragedy from happening again. They have taken up the hashtag #NeverAgain and planned the "March for our Lives" in Washington, D.C., and around the country for March 24.

Student organizers made the rounds of political talk shows on Sunday, explaining that they will start calling out politicians who don't take action on the issue. As Cameron Kasky, a junior at the high school and one of the march's organizers, told CNN's State of the Union:

My message for the people in office is this: You're either with us or against us. We are losing our lives while the adults are playing around.

The survivors have drawn headlines for their active response to the shooting. Several spoke at a gun control rally on Saturday in Fort Lauderdale. Senior Emma Gonzalez, in particular had strong words to share, calling "B.S." on politicians who say "that tougher gun laws do not decrease gun violence."

Kasky summed up what their newly organized group, Never Again, is all about, connecting it to NRA funding just as Gonzalez did on Saturday. "It's about creating a badge of shame for any politicians who are accepting money from the NRA and using us as collateral," Kasky told CNN Sunday.

Borges stepped up for his classmates, and now they're taking action to prevent something like this from ever happening again.