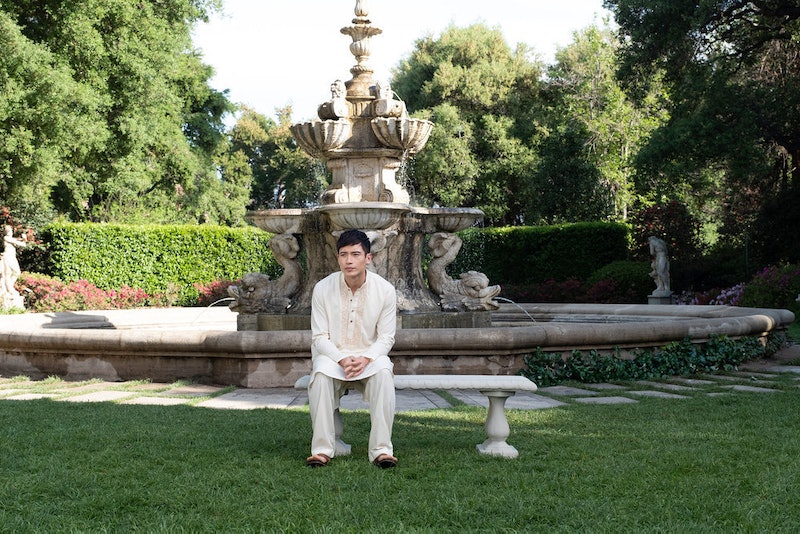 Spoilers ahead for The Good Place Season 4, Episode 3. Relationships in the afterlife, it seems, are just as complicated as they are on Earth: everyone in The Good Place Season 4 has broken up. Chidi sacrificed not only his relationship with Eleanor, but his memory of his relationship with Eleanor, in order to help the group's experiment. Eleanor, in turn, is stuck yearning for someone who doesn't even know they once were in love. Jason and Janet's breakup was a little more relatable: she has a lot going on in her life, and placating Jason's jealousy was time-consuming and, well, annoying. The thing about breaking up is it's not a one-time decision; you have to keep deciding to stay broken up. And in order to make that decision easier, you have to figure out how to "move on." Unfortunately for Eleanor et al, all roads out of heartache lead to ruin in the Oct. 10 episode.

"After I broke up with Jason, I researched how humans cope with relationships ending, and No. 8 on the list was doing something dumb with your hair," Janet tells Tahani, explaining her magenta highlights. "No. 42 was watch Mamma Mia: Here We Go Again, so I did that, too." Janet is new to the world of heartbreak and in search of harmless distraction. She didn't like the movie ("It's just a lot of the same songs as the first one"), but that's not the purpose of the distraction model of coping, which can never really make us happy. At best, it stops us from noticing how much time has passed since we were last happy. Two hours fell off the clock while Janet watched Mamma Mia, probably another hour as she waited for the magenta dye to lift. It's a good start.

Jason, by contrast, has opted for wallowing and doldrums. When Eleanor asks him for help with the experiment, he can't resist the chance to go Eeyore. "I'm probably just going to mess it up like I messed up things with Janet.'"

But if getting over exes is a race, Eleanor is clearly in last. "My man used to collect action figures of famous philosophers," she reminisces to Michael at the top of the episode. "What a dork, I love him so much." While villainizing an ex isn't usually helpful, pining for them is even more torturous. And yet, Eleanor is stuck in that mindset until a chance run-in with Chidi forces her to change course. Relieved of his memories of their relationship, Chidi is more carefree than we've ever seen him. Instead of saving humanity, he's wearing turquoise and organizing picnics. It hurts Eleanor's feelings to see, but it also spells disaster for the experiment.

Janet never tells us what's at the top of the list of human coping mechanisms, but it's easy to imagine revenge ranks pretty high. "I have a ton of experience making ex-boyfriends' lives miserable," Eleanor says, relishing in the fact that saving humanity also allows her to get even. Her plan is to have Jason reprise his Season 1 role of Jianyu and force Chidi to carry the burden of his secret.

For an audience who's seen this all before, this solution feels a little stale. Cue the stomach aches, the off-label Tums usage, the nervous babbling, the existential dread. This isn't the first time The Good Place has used a recursive plot structure to underscore how hard it is for human beings to change. But by the end of the episode, Chidi breaks down. He comes to Eleanor and Michael in distress. "I'm used to moral dilemmas, I like moral dilemmas, they're my jam," he explains without explaining, bound by his promise to keep Jianyu/Jason's secret. "But this just feels like I'm being punished somehow."

It's enough to make Eleanor cry. She went too far, and she liked it, and she's still completely heartbroken. Now she feels "a little better but still terrible" — probably not that different than if she'd just watched Mamma Mia: Here We Go Again. For Jason, throwing himself into his work offered some consolation, but not much.

In fact, it's Michael — who claims not to understand human emotions — who comes closest to suggesting the best next steps. "Even if it's not rational, you're allowed to feel a little angry," he tells a lovelorn Eleanor. "Let yourself off the hook." In other words, the only way out of heartache is through it — by whatever path you can bear.

More like this
Twitter Is Saying The Same Thing About 'Love Island'
By Sophie McEvoy
Shonda Rhimes Responded To The Surprise Exit Of A Day 1 'Grey's Anatomy' Figure
By Grace Wehniainen
Everything To Know About A Potential 'Lockwood & Co.' Season 2
By Gretchen Smail
This 'Gossip Girl' Wardrobe Error Has Gone Viral On TikTok
By Alyssa Lapid
Get Even More From Bustle — Sign Up For The Newsletter
From hair trends to relationship advice, our daily newsletter has everything you need to sound like a person who’s on TikTok, even if you aren’t.