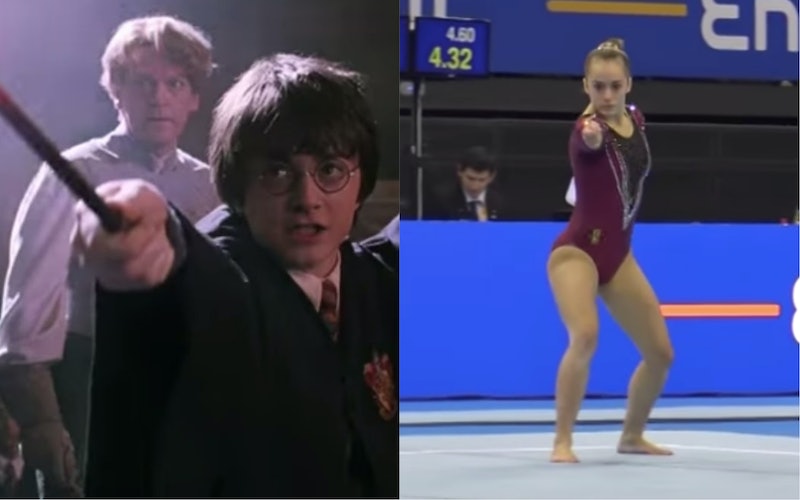 I don’t know about you, but I’m kind of loving this ongoing trend of artistic sports creating routines themed around beloved pop culture icons. Today, for example, we’ve got Belgian gymnast Axelle Klinckaert’s Harry Potter gymnastics floor routine: Performed at the 2018 DTB Cup in Stuttgart, Germany, it brings a magical touch to the competition — no Tarantallegra required.

Set to a medley of tunes gathered from the scores of the eight original films — including, of course, John Williams’ “Hedwig’s Theme,” AKA the tune everyone associates most closely with the Harry Potter movies — the 17-year-old’s tumbling routine includes tons of choreographic nods to the Wizarding World: There are some owl-like movements; there’s some spellcasting; and of course, there’s some dueling.

To be honest, the execution of the routine isn’t as clean as it could be — Klinckaert has a little trouble sticking some of the landings — and the choreography isn’t to everyone’s taste; indeed, there are a lot of comments on the video to the effect of “it's original, but it's so strange” and “what funny choreography!” Still, though: She looks like she’s having a lot of fun — and I say, A for effort, plus points for originality.

Unusual music choices and choreography seem to be Klinckaert’s signature; as one YouTube commenter put it, “Say whatever you want, but her FX is always original. It’s not just boring tumbling and no choreography.” I was delighted to discover, for example, that one of her test routines for the 2016 Olympics in Rio was set to music from a somewhat obscure Cirque du Soleil show I love called Quidam:

It’s a quirky routine, right? And, y’know, that makes sense, given the source of the music; it was used in one of Quidam’s clown acts:

Unfortunately Klinckaert wasn’t able to compete at Rio; she sustained an injury in July that year, knocking her out of the Games. The does perform this routine fairly often, though — here she is doing it in 2015, for example — and perhaps most importantly, she always looks like she’s having a ton of fun with it. Never underestimate the value of the enjoyment artistic athletes take during their events; it’s one of the things that makes them so entertaining to watch.

And again, I kind of love the fact that athletes who compete in sports with an artistic element—think gymnastics, figure skating, those kinds of events — are starting to take their cues for their routines from the things they love. Interestingly, Klinckaert isn’t the first artistic athlete to set a routine to Harry Potter music; former Russian figure skater Yulia Lipnitskaya won the 2012 ISU World Junior Figure Skating Championships in Belarus with a Harry Potter routine:

But the Wizarding World is far from the only pop culture icon to show up on the floor or ice. For example, former University of Georgia gymnast Noel Couch performed a Star Wars routine in 2013:

And, of course, who could forget Canadian duo Tessa Virtue and Scott Moir’s Moulin Rouge routine? You know, the one that was apparently a little too racy and had to get toned down for PyeongChang?

Given that the music used in gymnastics and skating routines often has a reputation for being “tacky” or “stuffy,” it’s refreshing to hear some different-sounding tunes pop up from time to time — and it’s even more fun when the athletes’ routines are choreographed to match their inspiration. Even if it’s not your jam — and even if they’re not necessarily the strongest contenders — there’s no denying the breath of fresh air these kinds of routines can be. More of this, please!