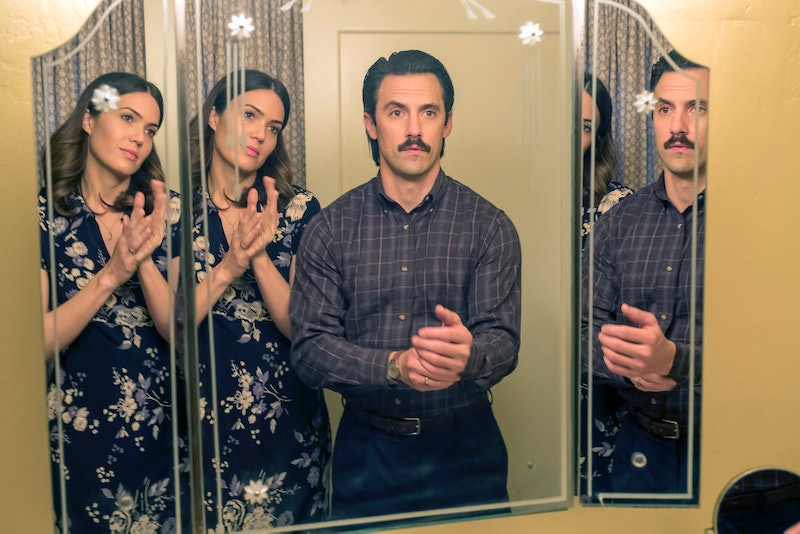 This Is Us may make its fans want to cry uncontrollably after each and every episode, but despite its emotional reputation, the show's popularity only continues to grow. Viewers just can't get enough of the Pearson family dynamic, which is why any details about the upcoming season are appreciated in order to quench our Big Three thirst. Thankfully, Milo Ventimiglia teased some This Is Us Season 3 spoilers during a recent interview with Gold Derby, however, fans may not find what he has to say all that comforting in regards to what the third installment has in store.

This Is Us makes a point of keeping plot details tightly under wraps, so Ventimiglia wasn't able to provide a ton of information on the matter. In fact, most of it was pretty cryptic. But what he did say is enough to raise the hair on the back of your neck and cause you to start biting your fingernails all the way down to the knuckle. Because when it comes to the Pearsons, you know heartache is never too far behind.

It all started when the outlet asked for Ventimiglia to describe Season 3 using only three words. The actor did them one better by upping his word usage to four and stating that viewers "won't see what's coming."

Granted, that sentiment is beyond vague and doesn't really indicate at all what that could mean for Jack, Rebecca, Kate, Randall, and Kevin, but it definitely carries an air of suspense with it, especially since many fans may have thought a majority of the show's mystery was over now that the cause of Jack's death has been revealed.

Yet Ventimiglia guarantees viewers that the twists are far from over. "I've spoken a lot with Dan [Fogelman] and the writers before we had our hiatus," Ventimiglia explained. "What I've heard of what the third season is, people have an idea and they think they do but man, you have no idea. You won't see what’s coming." As for what that means, Ventimiglia refused to say, but it definitely leaves the door open for more deaths — and with it, more tears.

Season 2 ended on yet another cliffhanger, with Kevin going to visit Vietnam, presumably to learn more about his father's time during the war. The second season also introduced a couple of different flash-forwards, with one scene showing an older Randall, who tells a now grown-up Tess that "it's time to go see her," to which Tess replies, "I'm not ready." The identify of this mystery "her" remains unknown, though both Beth and Annie are suspiciously MIA, leaving many worried that they could be the person in question. But even if they are, what happened that makes Tess not want to go visit?

That question carries a lot of weight, and given what Ventimiglia just said about not being able to predict what's coming, it's hard not to feel like the two things are connected. Suffice to say, the Pearsons problems are far from over.

Speaking of things that are bound to fill your eyes with a salty, wet substance, Ventimiglia also spoke a bit about his former Gilmore Girls costar, Alexis Bledel, and how proud he is of all of her recent success on The Handmaid's Tale. "What really makes me happy is knowing that Gilmore Girls was 16 years in the past and that Alexis is still doing amazing work to get nominated and then win," Ventimiglia stated, in reference to her Emmys win last year for Outstanding Guest Actress in a Drama Series.

It just goes to show that while Jack and Rebecca Pearson are an epic duo, fans should never forget about Jess and Rory. The fact that they still support each other after all these years is beyond sweet — even if their new projects constantly tear fans' hearts to shreds. And from the sounds of what Season 3 of This is Us has in store, it may be time to consider buying tissues in bulk.

More like this
Nicola Coughlan Addresses 'Bridgerton' Season 3 Backlash
By Sam Ramsden
Devi Is Going To Meet A “Smoldering Bad Boy” In ‘Never Have I Ever’ Season 4
By Jack Irvin and Gabrielle Bondi
A New 'And Just Like That' Table Read Pic Confirms A Key Character's Return
By Jack Irvin and Grace Wehniainen
On 'The Handmaid’s Tale,' Christine Ko Fights Back
By Gretchen Smail
Get Even More From Bustle — Sign Up For The Newsletter