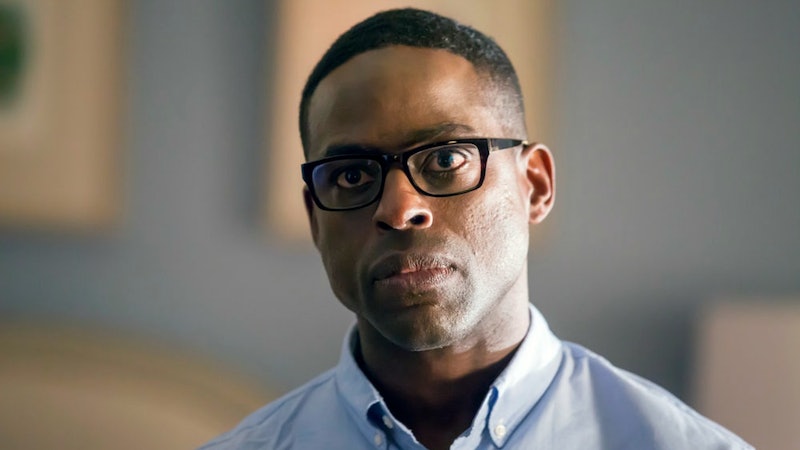 While the symptoms of an anxiety attack vary among individuals, there is one thing everyone who has ever been through an attack can agree on — it is a scary, physically and mentally exhausting experience. It also happens to be an experience that is rarely depicted in a meaningful way on TV. That is why This Is Us' portrayal of Randall's anxiety attack is so important, and just one more reason to love this incredible show.

In the most recent episode, "Jack Pearson's Son," the stress of his biological father's cancer, work, and fear that he wasn't devoting enough time to his family led to Randall having a full-blown panic attack. The show wisely revealed early on that Randall has been dealing with anxiety since he was a child. Between the moment earlier in the season when his wife, Beth, discussed a previous period in Randall's life when he became overwhelmed, and a flashback of young Kevin ignoring young Randall as he broke down while doing his homework, the show established anxiety has been a part of Randall's life for a long time. They even dramatized some of the signs of an impending attack in a way that resonated with many of the show's viewers.

Randall's hand tremor, his confusion as he called Kevin to tell him he wouldn't be able to make the play, and his blurred vision are all common signs of an attack. Instead of going over the top with the moment, This Is Us tapped into the physical and mental sensations Randall was experiencing, and in the process, shined a light on a subject non-anxiety sufferers often greatly misunderstand.

This is not the first time This Is Us has been fearless in its portrayal of issues other shows shy away from. Kate's journey of self-acceptance and the frank way she discusses her weight is another instance of the show offering an honest take on a subject that affects millions of Americans, but is rarely tackled onscreen. Body image issues and anxiety are two subjects that tend to make people uncomfortable, and that is exactly why they should be depicted in the respectful, realistic manner in which This Is Us has pulled off so easily all season long.

Randall's attack not only gave the show a chance to allow Sterling K. Brown to break fans' hearts again, it also highlighted how important it is for an anxiety sufferer's family and friends to know the signs of an attack and be there for their loved one. While medication and therapy can help manage anxiety disorders, there is no way to stop an attack once it is happening, and it can be alarming for a person to watch someone they love be in so much distress. Kevin dropped everything to be by his brother's side because he recognized from Randall's call that something wasn't right. When he arrived at Randall's office to find his brother having an attack, he offered comfort and support — which is exactly what Randall needed.

There is a stigma attached to all mental health issues, but when a show like This Is Us reveals even the person you think has everything in their life together can be quietly dealing with something like anxiety, it serves as a reminder anyone can have a mental health issue. It also opens up conversations between family and friends who may be suffering in silence for fear of being judged. When anxiety disorders are shown in a realistic light on TV, everyone benefits.

This Is Us is a brave, fearless show that digs deep every week to tell meaningful stories about being part of a family and finding self-acceptance. Yes, it is emotional, and it makes you cry, but make no mistake, it is not a melodrama — This Is Us is important TV. And it should be commended for all of the amazing work it does to make sure every viewer feels accepted and understood when they visit the Pearson family each week.