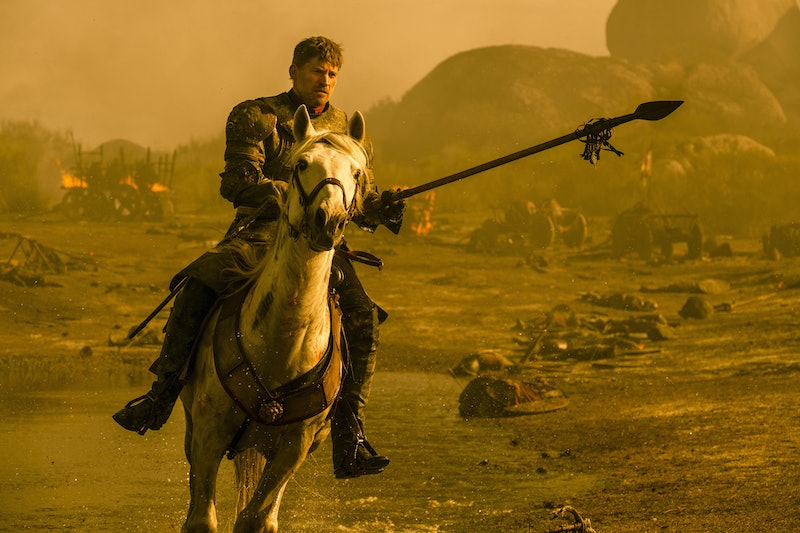 As the Long Night approaches on Game of Thrones, the hunt for Azor Ahai reborn is more on than ever before. At least among fans, that is. There are Azor Ahai theories about everyone from Beric Dondarrion to Hot Pie, but what if the answer was in front of our eyes the whole time? One theory is that Jaime Lannister is Azor Ahai on Game of Thrones. Since his fate is currently uncertain, a theory like that does provide some hope for his future.

In Westeros history, Azor Ahai was a legendary hero who defeated the White Walkers with a flaming sword called Lightbringer. He is the "Lord of Light" who many worship. There's a prophecy in GoT that states, "There will come a day after a long summer when the stars bleed and the cold breath of darkness falls heavy on the world. In this dread hour, a warrior shall draw from the fire a burning sword." That person will become Azor Ahai reborn.

Cersei's brother is not a traditional Chosen One, like Daenerys Targaryen and Jon Snow, so this would be a twist. Jaime was not born or raised as an orphan. He had a privileged upbringing. He doesn't have any special powers like Arya and Bran. The only thing he has in common with saviors in other fantasy tales is his missing hand — very Skywalker.

That said, there is evidence that leads to him being the prophesied savior Azor Ahai. Most of this evidence was brought to light by a Reddit thread earlier this year. "According to the Valyrian dictionary," said Reddit user Byrd82 in an interview with Paste magazine, "Valyrian words for lord and light are aeksio and onos. However, Valyrian words for gold and hand are aeksion and ondos." The only person with a gold hand in Game of Thrones is Jaime Lannister. Perhaps Melisandre should have been looking for the one "gold of hand" rather than the "lord of light." In Season 7 of the HBO series, Daenerys' advisor Missandei pointed out one grammatical translation error in the prophesy. Could there have been more?

Byrd82's theory goes on to compare Jaime's moral journey since the beginning of the story as a metaphor for Azor Ahai's journey rather than a literal repeat. For example, Azor Ahai attempts to forge a sword, but it breaks down in water. In Season 3, Jaime Lannister himself breaks down in water with Brienne, right after losing his hand.

The Reddit user also theorized that Jaime will kill Cersei, as the Lord of Light killed his wife Nissa Nissa. That also aligns with the "Valonqar" prophecy from the books, which states that a "little brother" will kill Cersei. Her twin brother was born moments after her, clutching on to her ankle (cute), so he's technically younger.

One key piece of evidence to support Jaime-as-Azor is a Season 4 scene between Meera and Jojen Reed, of all people. Meera asks her brother how they'll know what "the end" is, and he sets his hand ablaze and says, "You'll know." This happened to his right hand, like the one Jaime has been missing since the middle of the series. Also, in one of Jaime's chapters in the GoT books, he dreams of wielding a flaming sword like Lightbringer.

Another theory posted by Lauren Sarner on Inverse points out that one of the recently discovered cave drawings in Dragonstone resembles Jaime. See below, the figure on the left has some kind of sleeve, and wields a weapon in his left hand unlike the other two.

Perhaps Jaime is the key to defeating the threat from the North (which Azor Ahai is prophesied to do). A post by Rebecca Shorthall on Ranker posits that Jaime, being Azor Ahai, might seek a diplomatic solution and broker peace with the White Walkers. There's also a theory that it's not Tyrion Lannister who is a Secret Targaryen, but that Jaime and Cersei are King Aerys' bastard children — and Jaime will ride a dragon. That's not necessarily proof that he is Azor Ahai reborn, except that it is long believed that the savior is connected to another prophecy that talks of a dragon with three heads. Jaime could well be part of that trio.

Perhaps Jaime's rebirth, in a slightly more literal sense, is happening on the series just now. Episode 4 ended with Jaime being plunged into the deepest river of all time in order to avoid getting burned to a crisp by Drogon. According to the prophecy, Azor Ahai will be reborn in salt and smoke. I'm not sure whether the body of water Jaime plunged into is fresh water or salty, but that combined with the smoke from a dragon's breath could be a clue.

Perhaps the real purpose of this prophecy is to get the audience, and the fictional characters on Game of Thrones, to reject the concept of prophecies all together. Someone so unexpected, and yet on paper so expected, could highlight how meaningless this all is. Shouldn't the point be to work together and not rally behind a savior? Jaime initially subverted blond-chiseled-male-hero stereotypes by pushing Bran out of a window to protect his incestuous secret. If he were the Prince That Was Promised, he'd be sliding back into those blonde-haired and blue-eyed Prince Charming stereotypes. Jaime Lannister himself said to "f*ck prophecy" in Season 6, and such an expected conclusion to this prophecy would certainly be a bit of a wry ending.

Whether one person is the key to defeating the Night King and saving Westeros from the Long night or not, there is certainly an increasing amount of evidence that Jaime is Azor Ahai. What the Kingslayer does with this potentially foretold destiny matters most of all.