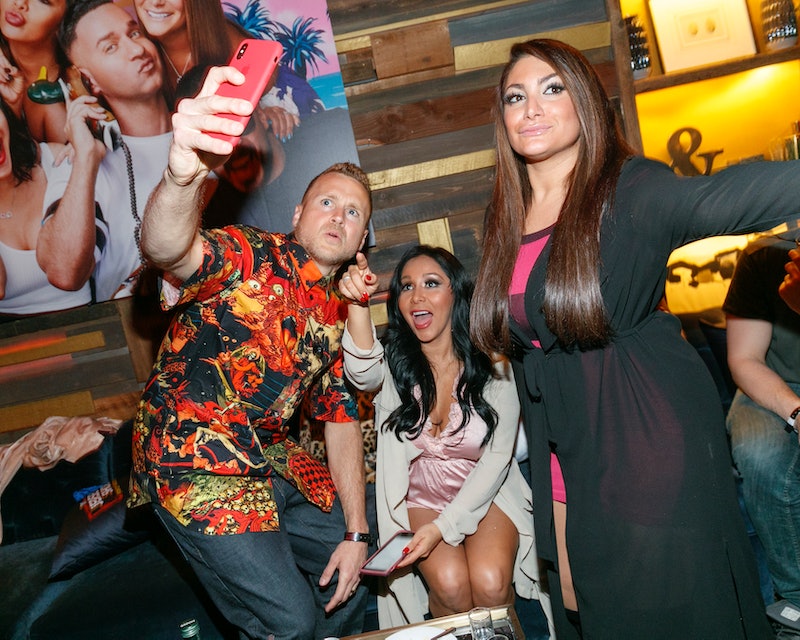 A The Hills alum, two Jersey Shore stars, and a Flavor of Love contestant walked into a bar… and uh, it was awesome. Something momentous happened at the Jersey Shore Family Vacation premiere party on Thursday night. And that momentous something involved JWoww, Snooki, New York, and Spencer Pratt taking a picture together. Yes, reality TV icons Jenni “JWoww” Farley, Nicole “Snooki” Polizzi, Tiffany “New York” Pollard, and one half of Speidi posed for a group photograph at a Jersey Shore event, and yes, this photograph of the four '00s reality TV legends is on the internet.

It seems like it was just yesterday when we met New York on Flavor of Love. But it was not yesterday; it was the year 2006. And remember when we were introduced to Spencer on The Hills? That happened in 2007. As in, over a decade ago. And finally, there’s Snooki and JWoww. Can you believe those two made their TV debut on Jersey Shore all the way back in 2009?

And now it is the year 2018, and all four of these reality star titans are celebrating the reboot of Jersey Shore together. Woww, the years really do zip by when you spend all the livelong day watching reality television. Behold the Mt. Rushmore of Viacom reality stars from the 2000s.

We are not worthy.

Just about everyone from the original Jersey Shore cast was present and accounted for. Yeah, buddy.

This pic of the Sitch posing with a painting of himself is a work of art.

Wait a second. *Scans part of brain that was recently converted into a reality TV encyclopedia.* Haven't some of the people listed above been on Celebrity Big Brother and Famously Single, too? Why, yes. Yes they have. Some were even co-stars at one point. The spider that is the reality TV universe sure knows how to spin a weird and wild web.

Oh, what's that? You say it is way too early to be fired up for a hypothetical premiere party for a season of TV that hasn't even filmed yet? You say that would be putting the cart in front of the cab?