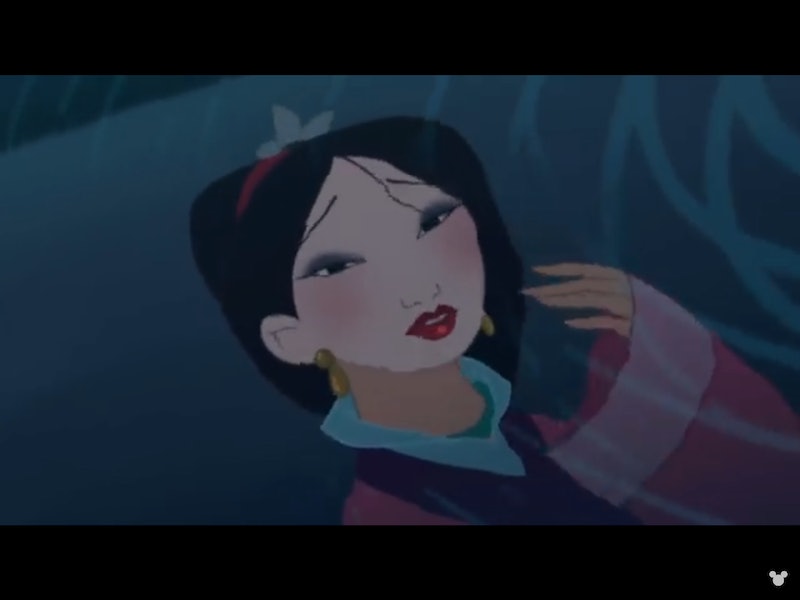 Disney fans can't seem to get enough of news surrounding its latest live-action project Mulan. And now, thanks to its director Niki Caro, enthusiasts waiting for the highly anticipated film's arrival will have something else to tie them over until its 2020 premiere. Caro posted this new live-action Mulan movie photo on Instagram and it shows the movie's star, Crystal Liu (also known as Liu Yife) in her title character's element. And the photo has a touching reference to your favorite song from the original film.

Along with Liu in the lead role, the roles of a few other central characters have also been announced. Legendary actor Jet Li will take on the role of the emperor of China, and Gong Li will play a witch, who's also Mulan's ultimate villian. Yes, the live-action Mulan will have a witch, and it's quite a turn from the original 1998 Disney release, as well as the legend of Hua Mulan of which the animation was inspired by. In addition to adding a supernatural character into the mix, the live-action Mulan will have a sister, played by actor Xana Tang, and New Zealand native Yoson An has been casted as Mulan's new love interest and fellow military recruit in Commander Tung’s unit, Chen Honghui (replacing Mulan's original love interest Li Shang).

The casting news isn't the major film change that completely rattled fans of the animation, however. Details surrounding whether or not the live-action Mulan will include songs has. Caro's latest Instagram post could be the very thing to put a lot of fan's minds at ease. As the behind-the-scenes photo draws very closely to Mulan's iconic tune "Reflection."

Captioned "Mulan. Day #1. Reflections. #mulan #disney #yifei_cc," Caro hinted a couple of things: one, being that production for the highly-anticipated remake is in a full swing, and two, answers to Mulan's musicial additions should be coming sooner than later.

While speaking with Entertainment Weekly about the remake reportedly lacking songs, Caro said, "I don’t know where that’s come from. We’ve never talked about songs, and no decision has been made." But seeing as Caro noted that song placement wasn't a conversation at the time of the 2017 interview, there's still hope that Disney may have changed their mind before heading into production. Either way, Caro's latest Instagram posts shows that there will be some semblance to the original's musical thread in the live-action, even if actual singing isn't included.

This isn't the first time Caro and Disney introduced the live-action Mulan to fans, however. The production conglomerate shared its first live-action Mulan photo of its star, Liu, Monday, Aug. 13, much to the delight of fans.

Needless to say, Liu looked amazing decked out in a stunning red robe and a look on her face that says she's ready for action.

The live-action isn't set to hit theaters until March 27, 2020. But as long as Caro and the Disney team continue to keep fans in the mix with behind-the-scenes sneak peeks, the wait to see Mulan's magic will totally fly by.