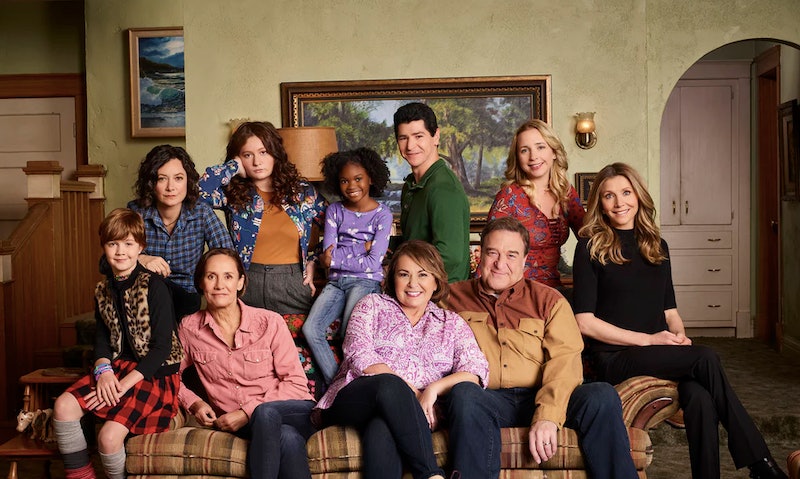 It looks like the Conner family is coming together nicely. The latest casting news for the Roseanne spinoff, The Conners reveals that Emma Kenney, Ames McNamara, and Jayden Rey will all be joining the new series, according to TV Line. The trio, who played Roseanne and Dan Conner's grandchildren on the now canceled Roseanne reboot, will reprise their roles and become series regulars when The Conners debuts this fall, per Deadline. They're joining previously announced returning castmembers John Goodman, Sara Gilbert, Laurie Metcalf, Lecy Goranson, and Michael Fishman. The original press release for the series noted that the spinoff would focus on the remaining members of the Conner family, but at the time, only Dan, Jackie, Darlene, Becky, and D.J. were mentioned in the statement from ABC. The official synopsis for The Conners reads:

Details surrounding the spinoff and how it intends to handle Roseanne Barr's absence have mostly been kept under wraps, leaving many to wonder what will happen to the show's once titular character. However, a an August 26 interview with John Goodman conducted by the U.K.'s Sunday Times suggests the show will reportedly kill Roseanne off. The family matriarch's death would certainly mark a "sudden turn of events," and propel the spinoff in a new direction.

When asked about Dan's role in The Conners, Goodman told the Sunday Times, "It's an unknown. I guess he'll be mopey and sad because his wife's dead."

For the past few months there have been subtle hints that Barr's character, Roseanne Conner, would be dead when the series returns this fall, but this appears to be the first time that someone directly connected to the show has mentioned the rumors. Bustle reached out to ABC about Goodman's statement, but the network declined to comment.

Roseanne was canceled in May after Barr posted a racist tweet about President Obama adviser Valerie Jarrett, which she later deleted and apologized for. Following the show's cancellation, ABC Entertainment president Channing Dungey shared a statement with Bustle that read:

Barr will not be creatively or financially involved in The Conners. In a previous statement issued to Bustle, Barr responded to the spinoff news,

The Conners, which is slated to make its ABC premiere on October 16, will reportedly feature 10 episodes and see the return of Kenney as Darlene and David's rebellious daughter, Harris, as well as McNamara as Harris' gender fluid sibling, Mark. Rey, who had a recurring role as DJ’s daughter Mary, will now be upped to a series regular, according to TVLine.

While it's still unclear what the future holds for the iconic Conner family, it's good to see that these three young stars are back in the fold.