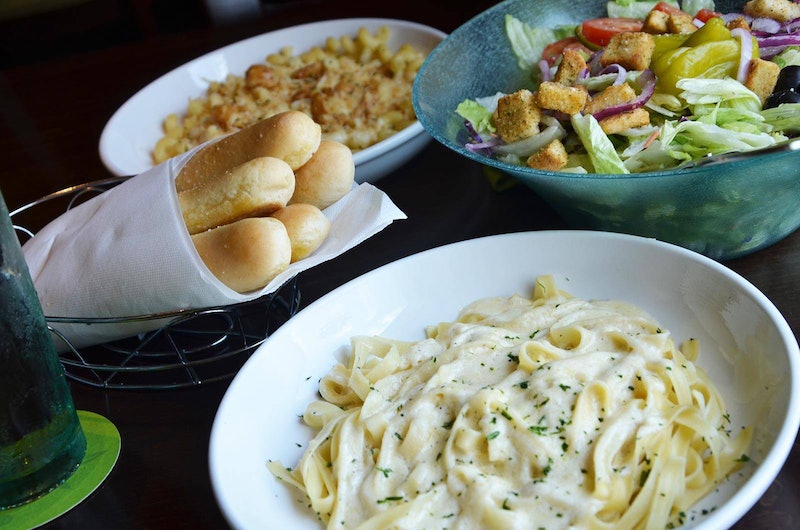 I know, I know — “Olive Garden fan fiction” is not a phrase I ever thought I would encounter in my lifetime, either. But now that you and I have both introduced this somewhat unexpected concept to our brains, Gentle Reader, let us explore it more fully — because it is, astonishingly, one of the greatest things you will read today. No, really. I promise. It is everything you think it will be, and more.

It began with an essay. The essay is called “Christ in the Garden of Endless Breadsticks” — a perfect title if I’ve ever seen one — and it is by writer and editor Helen Rosner. It is about many things, this essay, but most of all, it is about a sense of place — or, more accurately, a sense of non-place. Early on in the essay, Rosner sums up the entire point of Olive Garden as an institution as follows: “Its product is nominally pasta and wine, but what Olive Garden is actually selling is Olive Garden, a room of comfort and familiarity, a place to return to over and over.”

Later on, though, she really nails how effective Olive Garden really is at selling Olive Garden:

One of the things I love about the Olive Garden, the reason I continue to love it, despite its gummy pasta and its maladaptive, kale-forward response to modern food culture, is its nowhereness. I love that I can walk in the door of an Olive Garden in Michigan City, Indiana, and feel like I’m in the same room I enter when I step into an Olive Garden in Queens or Rhode Island or the middle of Los Angeles. There is only one Olive Garden, but it has a thousand doors.

That last line? It is glorious. (In fact, that is why I bolded it — I really, really wanted to make sure no one missed it. It is just that good.) And then one Twitter user managed to pinpoint exactly why:

As the youths say: Accurate. I may have had a small "Eureka!" moment as that concept clicked into place in my brain.

It was then that Rosner laid out her challenge: “Holy crap I will buy dinner for 4 at Olive Garden for anyone who writes a real short story with this as the opening line,” she tweeted. The rules were as follows:

And then, just in case clarification was required:

And then? The entries came pouring in.

Computational social scientist David Masad was the first entrant; his tale of Deborah, a woman who discovers the joys of experiencing Olive Garden as a kind of cosmic waystation, has no title, but includes this gem:

“You have to eat something.”

“Excuse me?” Deborah spun around, flustered and closing thedoor behind her.

“You have to eat something first,” the man repeated. He wasolder, with the ballcap and windbreaker over a tucked-in shirt that could havemade him 60 or 90. “Then you’ll find what you’re looking for.”

“Folks, @badnetworker wrote a perfect little short storybased on my Olive Garden prompt and gets a free dinner!” tweeted Rosner.

Next was arts nonprofit development writer Genevieve Oliver, who spun a coming-of-age story in a dystopian setting. Here’s a taste of that one:

I was thinking about this Olive Garden ad I’d seen on TV. Because of the doors, people could meet up with their families from other parts of the country who otherwise they might never see because of the travel restrictions and complicated visa requirements. Of course, this would present issues later and for a while several of the doors were closed by federal decree. One of the doors was even destroyed by radicals in a controlled explosion in protest of these closures. But the ad showed a montage of images of people embracing and sobbing. They were holding each other for a long time and rocking back and forth slowly like a dance. Eventually the waiters came over and separated them and then they all sat down and ate bread sticks and drank wine. At last when the time came they went to their separate doors. They blew kisses at each other out of the long security lines and these kisses were carried to their targets on the basil-smelling breeze. Then they disappeared again.

Tweeted Rosner, “And here's a wonderful Olive Garden story from @vittorioe! I'm so amazed y'all are doing this.”

Then, she upped the ante a little:

Writer Curtis Døde Aldri‏ came next with “Infinite Bread-Sticks Of The Soul, Mind And Body (Reality Vs. Pasta),” which he published on Medium. This one turns Olive Garden into a sort of NoEnd House full of pasta and bread sticks:

I stood patiently, not knowing if this would be the last door or the first of many more. Most in my situation would have an overwhelming feeling of impatience, anger even, but there was no reason at this point to feel anything but a hopeful tremor of positivity along with deathly ambivalence. Regardless of the outcome, if we were to die here in this Olive Garden, it had been an experience worth living a lifetime for. There had been bread-sticks, yes, but that is not the sole reason one ventures to Olive Garden. Just like soggy skinned chicken wings is not the sole reason one ventures to a Chili’s. There was something a bit more ethereal about just being here, much less being stuck here for what seemed like and what actually may have been an eternity.

(He noted at the bottom of his story, “If you are curious, [Rosner] donated my dinner cause there’s no way I’d actually ever again eat at Olive Garden.”)

I’m not totally sure when Rosner hit the “first four” mark —as she noted in a later tweet, some people submitted their stories to her privately — but the last she retweeted came from sports writer Michael Harshbarger, a puzzling tale titled "The OG" that honestly sounds kind of like a bad trip. It includes this excerpt:

The passing of time is nearly impossible to gauge in this place, so if I had to guess I’d say I had been wandering the OG for around 5 years until I ran into another living thing. But that was just George, and he was just a sentient bowl of endless salad. Didn’t have much to say, really.

So then, it was probably 3 years after I bumped into George, nearly spilling his entire insides  —  lettuce, olives, weird-colored onions  —  all over the bar, that I walked in door #173 and pulled up quick. The most wondrous creature I had ever seen was lounging on the table of a booth in the far corner. You know, the one up a few stairs and to your right? Yes, that one.

There are more stories to be found if you scroll through the replies to the tweet that laid out the rules — and honestly, if you spent your entire day doing nothing but reading Olive Garden fan fiction, I would say that it was a completely acceptable use of your time. Because sometimes, we all just need to be a little ridiculous.

Rosner, by the way, was recently in Eastern Europe. While she was there, she tweeted this photo:

When asked where the doors were, she replied, “They are infinite.”

May your life, too, be full of infinite doors and never-ending soup, salad, and bread sticks.