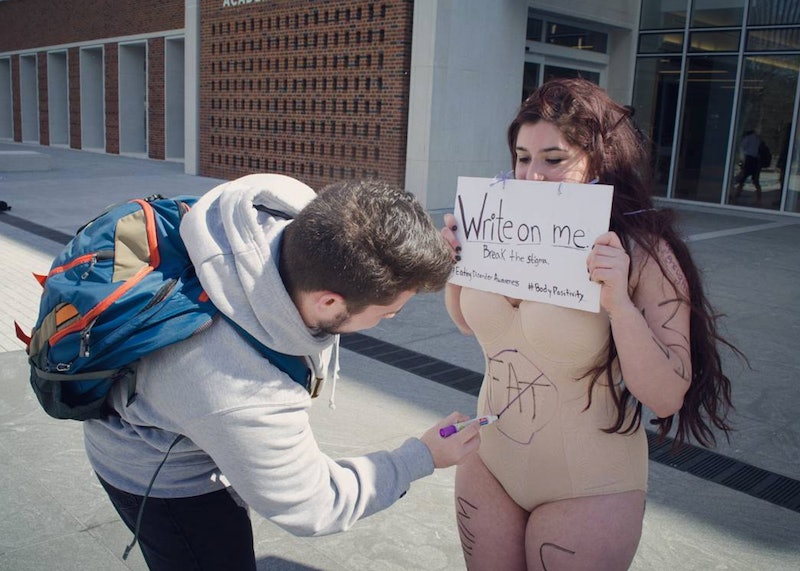 As an eating disorder survivor, Martina Maya-Callen spent years at war with her body. So, she created a unique performance art piece to make peace with it — and encourage others to do the same. The Salisbury University student stood on her campus in nothing but a leotard, wrote body-negative things she's said to herself on her body, and gave those who passed by a marker to write kind things instead. "My personal journey to self-love is what inspired me to create this project, because I wanted to spread this message to others," she tells Bustle.

She stood there from 11:30 a.m.to 12:30 p.m on Friday, March 3 with words like "ugly" and "unworthy" written on her body, while people slowly crossed them out and replaced them with body-positive alternatives. During the performance, she yelled, “What a crazy idea, to be happy with yourself just the way you are!”

Next to her was a door representing the closet she felt she's come out of since she began recovery. "The inside describes what it is like to have an eating disorder/self-hate/negative body image for yourself," she wrote in one of her Instagram posts sharing the project. "Meanwhile, the outside was [for] the community to write comments on body positivity, eating disorders, and a society that makes people feel like they are not good enough."

Maya-Callen shared photos of the performance on her Instagram, where it's made quite a splash; one image has garnered over 25,000 likes.

"This topic is extremely personal to me as I have heavily struggled with body image and self-hatred," Maya-Callen tells Bustle. "I felt as though I was not good enough, and society pushed unrealistic beauty standards on me (as they do everyone), which assisted in my obsession with numbers — measurements, weight, scales, and calories —which began to completely control me."

Now that she's in a better place, she wants to help others get there — and it sounds like it's working. One student, Elana Taylor, told The Flyer the performance inspired her. "She talked about things a lot of people tried to hide and ignore and she put it out there for everyone to try to understand," she said.

Maya-Callen also wanted to visually represent the transformation her mental health underwent during her recovery. We often see larger "before" photos followed by thin "after" photos to indicate a supposed improvement in health, but improving health — particularly mental health — often doesn't mean getting thinner. For her, in fact, it meant weight gain. "Recently, I have grown to love my reflection in the mirror even though I am the heaviest weight that I have been in my life," she tells Bustle.

But the transformation she depicted in the piece didn't involve any changes to her body — it was about the words on it. Similarly, eating disorder recovery isn't really about gaining or losing weight; it's about improving your mental health, whatever the physical results of that are.

This isn't the first experiment of its kind. Activist Amy Pence-Brown stood outside in Boise, ID and had people write positive things on her body. Another woman named Jae West did the same in London, instructing people to write hearts to show "I support self-acceptance — for everyone on the planet."

Maya-Callen hopes that the people who saw her project on campus and on Instagram leave thinking, "You are worthy. You are enough. You are beautiful."

"I will keep screaming this at the top of my lungs, standing outside half-naked, and dancing goofy on Instagram while showing off my belly rolls and cellulite until you realize the vessel that holds your soul is amazing," she tells Bustle. "Let’s start a radical revolution of self-love!"

Given that only 11 percent of American women feel positively about their bodies, according to a Yahoo Health survey, and almost every teen girl wants to change the way she looks, according to a Campaign for Real Beauty study, that's a message many of us could stand to hear. If you've used the words Maya-Callen started off with toward yourself, you're far from alone, but there is an alternative.