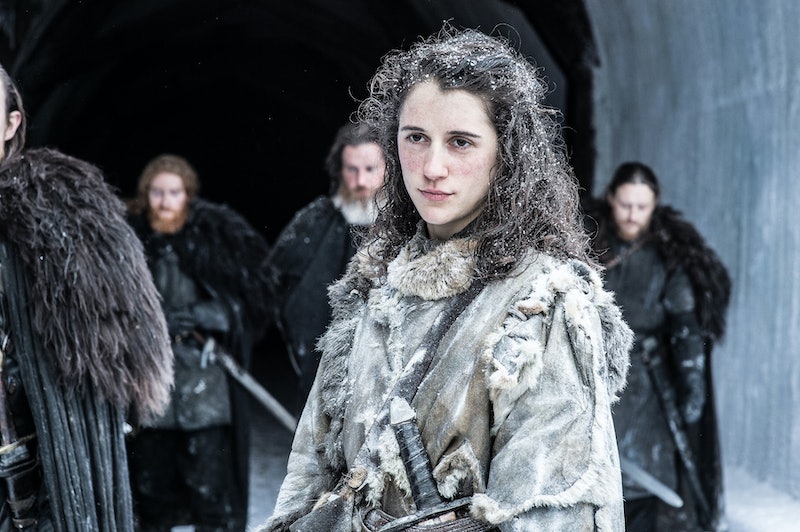 It's hard to imagine any show generating more fan theories than Game of Thrones. Thanks to a sprawling cast of characters, a long list of prophecies, and a dash of time-hopping, the possibilities for twists are endless. However, some Game of Thrones fan theories make no sense when you really look at them. For instance, just because R + L did indeed equal Jon, doesn't mean that whole Ned Stark is still alive dream is going to pan out. There's one popular Game of Thrones fan theory in particular that just doesn't hold up under scrutiny though, and that's the idea that Meera Reed is Jon Snow's twin.

To be fair, this theory could potentially pan out in the A Song of Ice and Fire books where secret Targaryens seem to be hiding in every corner. However, in the world of Game of Thrones the show, Meera being Jon's sister wouldn't accomplish much aside from reminding fans of Star Wars. But more importantly, it would mean Ned made a choice that goes against his "the pack survives" mentality.

Both Ned and Meera's father, Howland Reed, were at the Tower of Joy when Lyanna gave birth to Jon, so Howland likely knows the Stark family secret. But why would Ned give him one of Lyanna's children to raise? Nothing is more important to Ned than family, and if he was already going to show up at Winterfell with Jon in tow, bringing Meera along wouldn't have looked suspicious. It's not like twins run in the Targaryen family, so giving his niece to Howland wouldn't have accomplished much.

An argument could be made that it would have been a wise political move. By splitting Jon and Meera up, there would be two potential Targaryen heirs in two separate locations in case Robert ever discovered the truth. It also would have been a wise move if Ned and Howland suspected one child would look more like its Southern father, than its Northern mother. But let's be real here, Ned doesn't care about politics. If he had any desire to see Jon instilled on the Iron Throne, he never would have permitted him to join the Night's Watch.

Ned is not a man who is motivated by politics. His primary concern is family, and he made a vow to protect his nephew. He kept that vow by raising Jon as his own son. If Meera was Lyanna's daughter, there's no way Ned would have sent her to live with Howland. Friend or not, the Reeds aren't family, and Ned would have wanted to keep his niece at Winterfell.

There are plenty of Game of Thrones theories out there that are way more far-fetched than this one, but they debunk themselves. The idea that Meera and Jon are twins has a plausibility factor that makes it alluring at first glance, but for it to be true, everything that is good and noble about Ned Stark would be up for debate. His stubbornness means he would have believed he was perfectly capable of keeping both children safe, and his love for his sister suggests he would do anything to have them raised together as Starks.

Jon and Meera are both strong, resilient characters, but that's where their connection has to end. The idea that they're related doesn't add anything to the narrative, and it's far too much of a departure for Ned's character. While Howland may come into play in Season 8, don't expect him to drop a paternity revelation on Meera anytime soon.